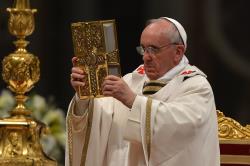 Many people don’t know that Pope Francis planned to write his thesis on Romano Guardini, the distinguished theologian and liturgist who had a profound influence on Joseph Ratzinger.  Ratzinger even named one of his most important books with the same title as that of one of Guardini’s, namely, The Spirit of the Liturgy.  (We need to read and apply what Ratzinger wrote now more than ever, by the way.) [Magister corrected his own entry which now reads: “It was precisely on Guardini that the Jesuit Bergoglio was planning to write the thesis for his doctorate in theology, during an academic sojourn in Germany in 1986 at the philosophical-theological faculty of Sankt Georgen in Frankfurt: a plan that was later abandoned.”]

Pope Benedict, the day he stepped-down, quoted Guardini twice in his final speech as Pope.

A reader left a short note on my voice mail (see the side bar for more on that) about a piece by Sandro Magister concerning the first Holy Week of Pope Francis. I knew about the piece, but I liked the fact that he took the time to use the VM option.

Let’s have a look at Magister’s piece with my emphases and comments.  At the end, I respond.

Powerful gestures. Simplified rituals. A week that has revealed the style of the new pope. But has also raised some questions that have gone unanswered

ROME, April 1, 2013 – The first Holy Week of Pope Francis has revealed his style even more. In celebration, in preaching, in presence.

The “people” liturgically loaded onto the shoulders of the priest who celebrates, the “peripheries” of the cities and the hearts touched by the messianic oil, the pastors who must take “the odor of the sheep” are images that remain successfully imprinted.

“L’Osservatore Romano” of March 30 revealed that the text of this homily for the Chrism Mass, “with the exception of some additions,” was the same one that Bergoglio had “prepared before he was elected pope and had delivered to his collaborators before leaving for the conclave,” so much so that it was also read at the Chrism Mass celebrated in the cathedral of Buenos Aires.  [I had missed that, being busy with Triduum stuff.  I find that reassuring.]

[And now the point…] As for the “ars celebrandi,” in the liturgies of Holy Week at St. Peter’s there was noted a more elevated respect for the symbolism and the splendor of the rituals than that seen at work in the Mass for the beginning of the pontificate.  [I sincerely don’t mean for this to sound snarky, but it wouldn’t be too hard to have elevated the style in comparison to the first few days.]

Here as well, however, with abbreviations that were not always understandable. In particular, it was not clear why at the Easter Vigil, after the singing of the Exultet, the biblical readings were cut to the bone and the first was literally mutilated, with the account of the six days of creation limited to the creation of man alone.  [That was strange, indeed.]

That brevity which in some contexts can find justification and is in effect provided for by the missal [ahhhh…. Novus Ordo options…] made no obvious sense in an Easter Vigil presided over by the pope and attended – in person or via transmission – by a highly motivated faithful people, who were deprived of the fullness of that narration of the “historia salutis” which the liturgy illuminates, on this culminating night of the year, with the lighting of the Easter candle.

In one of his memorable passages, Romano Guardini described the celebration of the Easter liturgy in the basilica of Monreale, Sicily, packed with poor and mostly illiterate farmers, who nonetheless were enchanted by the splendor of the rite: “The sacred ceremony lasted for more than four hours, and yet there was always a lively participation.” [Obviously meant as interior participation, a close and attentive following of all the gestures and words.]

It was precisely on Guardini that the Jesuit Bergoglio wrote the thesis for his doctorate in theology, in Frankfurt in 1986.

Magister is saying that, on the one hand, there have been improvements since the beginning of the pontificate. On the other hand, there is a serious defect and that Pope Francis ought to know better because he read Guardini.

Of course it is possible that Francis has forgotten what he read about Guardini… I don’t remember everything I wrote over the last couple decades and I am not 76… or that he read Guardini and came to different conclusions than Ratzinger did!  I haven’t read what Francis wrote – decades ago – about Guardini or what he concentrated on.  I don’t remember every point I made in my own thesis on Augustine.  If Bergoglio had planned to write a thesis on Guardini, that means that he had read a lot of Guardini along the way.

Moreover, as I have been saying all along, Pope Francis needs some time to learn how to be Pope.  We also have to learn to have him be our Pope.

He has done things that I think are both strange and ill-considered.  On the other hand, he minces no words about the warfare we are in with the Devil, to whom he refers clearly and boldly.  He spoke about the need for priests to hear confessions, though that was in private.  I’ll bet he speaks about it publicly too, before long.  In his homilies has has entirely eschewed a modern biblical exegetical style in favor of a more Patristic, allegorical style… even as Ratzinger famously used.  His use the image of the garb of the Old Testament priesthood and the chasuble priests put on for Mass was like something Pope Benedict would have offered us, and he wrote it before he was elected: it was his own work and not that of some flunky in the Secretariate of State.  There are a lot of things Francis is showing which traditional Catholics can sincerely applaud (if they can get over themselves long enough to see them).

Even though Francis has painted himself into a corner through his abrupt dramatic changes, he is more than likely going to adjust to the exigencies of his office, which include decorum at a different level and an awareness that he is more than the bishop of a diocese somewhere.

Time, friends.  Patience.  And pray for him.  He must be wondering if he is going to wake up from some sort of long, strange dream.

Here is my point.

We must not pit Francis against Benedict right now. We find the continuity between them.

Fr. Z is the guy who runs this blog. o{]:¬)
View all posts by Fr. John Zuhlsdorf →
This entry was posted in "How To..." - Practical Notes, Benedict XVI, Francis, Liturgy Science Theatre 3000, Our Catholic Identity, Reading Francis Through Benedict, The Drill, The future and our choices and tagged ars celebrandi, Chrism Mass, Easter Vigil, historia salutis, Pope Francis, Romano Guardini. Bookmark the permalink.