It is nice to have as your Patron the great Baptist, for I get two feasts a year, his Nativity and his Beheading.

For the Vigil of St. John (today, as I write) in the old Roman Ritual the priest would once bless bonfires!

And in Bavaria, witches are burned!  A priest friend who shares my feast sent me a spiffing photo (below – a little hard to see at this size, but I assure you, there is a witch in there).

If you have any unwanted witches (and don’t we all?), send them to Bavaria next year for a nice vacation.

In other places, cast-off or unneeded things are burned… in a way parallel, I suppose, to throwing things away at the other end of the year after the Winter Solstice.

In any event, the evening is about as long as the year can offer, so a great party could be had well into the night with much cooking in the open and revelry.  Have a nice bonfire!

The blessing for the bonfire is beautiful.  After the usual introduction, the priest blesses the fire saying:

Lord God, almighty Father, the light that never fails and the source of all light, sanctify ? this new fire, and grant that after the darkness of this life we may come unsullied to you who are light eternal; through Christ our Lord. All: Amen.

At this point the fire is sprinkled with holy water and everyone sings the hymn Ut quaent laxis which is also the Vespers hymn.

It is almost as if the fire, and our celebration, is baptized.

The reference to light and darkness surely harks to the fact of the Solstice, which was just observed. At this point the days get shorter in the Northern Hemisphere.  I looked at that HERE and HERE. 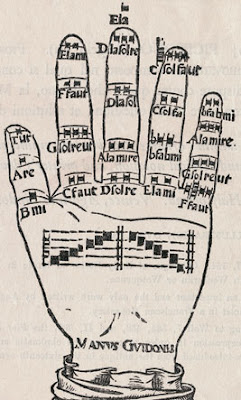 For the feast of St. John in June for centuries the Church has sung at Vespers the hymn beginning Ut queant laxis.

If you want to hear Ut queant laxis sung “in the wild”, as it were, check out the Benedictines at Norcia, a fine group of men, really living the Benedictine life in the place where Benedict is said to have been born.  HERE (they don’t update consistently – but buy their new chant album HERE).  Also, check the monks at Le Barroux.  Hard core.  Fantastic chant. HERE

Those of you who are lovers of the movie The Sound of Music will instantly recognize this hymn as the source of the syllables used in solfège or solmization (the use of syllables instead of letters to denote the degrees of a musical scale). Both the ancient Chinese and Greeks had such a system.

The Benedictine monk Guido d’Arezzo (c. 990-1050) introduced the now familiar syllables ut re mi fa sol la for the tones of the hexachord c to a… or, more modally, the tonic, supertonic, mediant, etc. of a major scale. The Guidonian syllables derive from the hymn for the feast of St. John the Baptist:

After the medieval period (when music became less modal and more tonal) to complete the octave of the scale the other syllable was introduced (si – taken from S-ancte I-oannes, becomes “ti”) and the awkward ut was replaced sometime in the mid 17th c. with do (or also doh – not to be confused in any way with the Homeric Simpsonic epithet so adored by today’s youth, derived as it is from the 21st century’s new liturgical focal point – TV) and do came to be more or less fixed with C though in some cases do remains movable.

So, now you know where Doh, Re, Mi comes from!  Check out this oldie PODCAzT from 2007:

It is also good to gather St. John’s Wort (Hypericum perforatum) on the feast.  “Wort” is from Old English wyrt (German Würze), which means “plant”, but is used mostly in compounds.  Since ancient times “singent’s wort” was known to relieve melancholy or depression, as does borage… which every garden should have.  It would be hung above doors, windows and sacred images (hence the hyper-icum “above image”) to keep witches and evil spirit away.  Burning those witches might have something to do with its effectiveness as well, now that I think about it.

Build a fire tonight, even if you can’t burn a witch, and sing something in honor of St. John!

Oh! And eat some snails.

It is a Roman custom to eat snails on the Feast of John the Baptist.

And, just in case it has been a while…