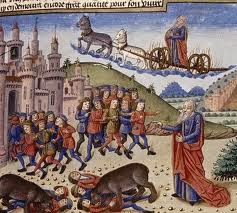 Today is the commemoration of St. Elisha, prophet, called also Eliseus.  He was the disciple of Elijah (1 Kings 19:1-21).  When Elijah was about to be taken up to heaven in the fiery chariot, Elisha asked for a double portion of his spirit.  So great was God’s power to work miracles in him that even touching his corpse could heal (cf. Ecclesiasticus, 48, 152; Kings 13:20-21).

Maybe some of you would like to take a shot at his entry in the Martyrologium Romanum:

Carmelites make much of St. Elisha, I suppose because of his connection to Elijah and that he sojourned on Mt. Carmel for a while.  They have celebrated his feast since 1399.  I found this prayer online, though I don’t have the Latin original to compare it with (from Carmelite Proper of the Liturgy of the Hours,” Institutum Carmelitanum, Rome: 1993).  Perhaps one of you out there have the Latin version and will post it.

O God,
protector and redeemer of the human family,
whose wonders have been proclaimed through the wonders accomplished by your chosen prophets,
you have bestowed the spirit of Elijah on your prophet Elisha:
in your kindness grant us too
an increase in the gifts of the Holy Spirit
so that, living as prophets,
we will bear constant witness to your abiding presence and providence.

One of the things I think about right away when Elisha is mentioned is the older form of blessing Holy Water.  Exorcised and blessed salt is used in the rite for blessing water.  Why Elisha?  In 2 Kings 2, Elisha pours salt into the waters of the Jericho which were poison, and caused deaths and miscarriages.  Also, in the rites of blessing water, the salt to be used is addressed personally as a creature of God when it is exorcised.  NB: adjuro is a great verb meaning basically in later Latin “to conjure or adjure, to beg or entreat earnestly”.  In the writings of North African Fathers such as Tertullian, Cyprian, and Lactantius it comes to mean “oblige by speaking” and is applied to exorcising demons and unclean spirits.

O you creature of salt, I purge you of all evil by the living + God, by the true + God, by the holy + God, who commanded by the Prophet Elisha that you be put into water in order that the sterility of the water would be healed: so that you might be rendered a purified salt for the salvation of believers, and so that you might be a healthiness of soul and body to all who consume you, and so that you may put to flight and drive out from a place in which you will have been scattered every phantom and wickedness, and cunning trap of diabolical deceit, and every unclean spirit be solemnly banished by command through Him Who shall come to judge the living and the dead, and the world by fire.  R. Amen.

Priests ought to pray this way all the time.

Fathers! Elisha doesn’t want you to use wimpy prayers that are vague and uninteresting.

No joke! Mock Elisha and you might get mauled by bears.  Ask those children in 2 Kings 2 what happens when you mock the prophet.  You may recall that a bunch of little kids started to razz Elisha.  He cursed them and a couple of female bears came out of the forest and tore them to bits. Fr. Z is the guy who runs this blog. o{]:¬)
View all posts by Fr. John Zuhlsdorf →
This entry was posted in Saints: Stories & Symbols and tagged bears, Eliseus, Elisha. Bookmark the permalink.