Vigil and the Tears of St Lawrence

The other day I posted a rather introspective post about my attitude these days, quoting Stevie Ray Vaughn’s version of

The Sky Is Crying

Well, the sky really is crying right now, and not with rain but with burning comet dust.

Today is the Vigil of St. Lawrence, in the older, traditional Roman calendar, replete with purple vestments. Before our feasts we Catholics do some penance.

What this also means, however, is that it is time for the annual Perseid Meteor Shower, so called because the meteors appear to be streaking out from within the constellation Perseus.

And the shower has been traditionally nicknamed the Tears of St. Lawrence.

Each year your little whirling blue ball zooms through the debris of a comet named Swift-Tuttle.

So, those of you in the northern hemisphere should get out there and watch the meteors. If you have children, make a plan. I have fond memories of looking into the heavens as a kid.

From SpaceWeather for 7 August

PERSEID METEOR SHOWER INTENSIFIES: The Perseid meteor shower is underway as Earth enters a stream of debris from giant comet 109P/Swift-Tuttle. International observers are reporting as many as 18 meteors per hour from dark-sky sites–rates that could increase 5-fold by the time the shower peaks this weekend. On August 6th, Catalin Tapardel caught this early Perseid crossing a satellite over Kakwa, Alberta, Canada: 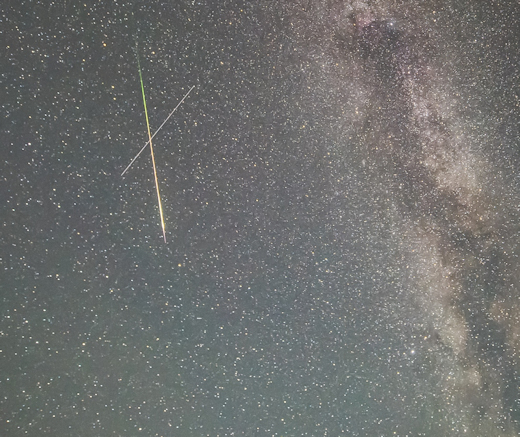 “I went out in order to get some shots of the Milky Way and I realized there were quite a few Perseids, too,” he says. “As I was shooting, I realized moving my flashlight around the bushes that a lynx was staring at me! Not a big cat, but scary to watch it, staying still as a sphinx, looking at me….”

Wildcats are something to think about when you consider these Perseid observing tips: Number one, get away from city lights. Rural areas are the best places to see a meteor shower. Dress warmly, lie down on a blanket in a safe, dark place, and look up. Perseids can appear in any part of the sky, although all of their tails will point back toward the radiant in the constellation Perseus. 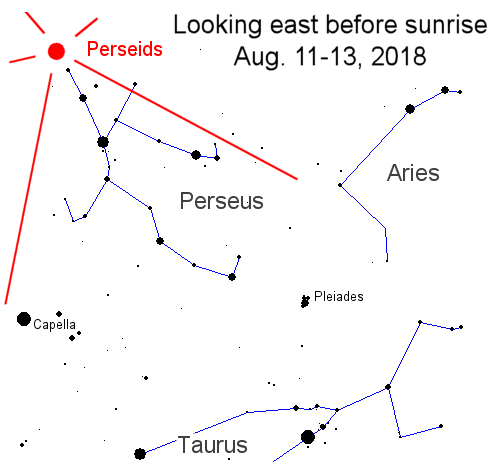 Earth is just in the outskirts of the comet’s debris stream now. Activity will increase as our planet passes through the core of the stream this weekend. The best time to look is during the dark hours before sunrise on Sunday, August 12th, and again on Monday, August 13th. At those times, the shower’s radiant will be high in the sky, spewing meteors in all directions.

Fun tip: Try looking for Perseids around 10 pm local time when the radiant is hugging the northern horizon. At that time, Perseids skim the top of the atmosphere, producing long colorful fireballs known as “Earthgrazers.” You won’t see many, but even one can make your day. Enjoy the show!

EARTHGRAZERS!   If that is not cool, what is?

Friends, if it is clear, I’ll be out there watching the Tears of St Lawrence and I’ll probably listen to

On another note, speaking about my attitude these days, the texts of Vespers for the Vigil of Lawrence spoke directly to my heart, given the complex situation of the Church today. I was much consoled, and I haven’t had a consolation for many moons.  And speaking of the moon, there are verses from Scripture in the Vespers office today which make me think that someone back when, in assembling these prayers, may have known about the Tears of St. Lawrence.   Check out Vespers and see.  HERE

Not only that, but right now the seminarians of the diocese are all here together with the Extraordinary Ordinary this week, plus.  Today I was able to give all the seminarians a 1962 handmissal from Angelus Press and they will have a Solemn Mass with newly ordained priests and deacons as the ministers on Sunday!  Very cool.  And we old guys aren’t involved!  Furthermore, the opening antiphon for Vespers was:

Ant. Behold how good * and how pleasant it is for brethren to dwell together in unity.

Fr. Z is the guy who runs this blog. o{]:¬)
View all posts by Fr. John Zuhlsdorf →
This entry was posted in Look! Up in the sky! and tagged Perseid Meteor Shower, Tears of St. Lawrence. Bookmark the permalink.