Benedict XVI, cent’anni, doesn’t appear in public very often.  He just gave his first public address since his resignation in the Sala Clementina (alas, not from the central, raised chair). Benedict appeared on the occasion of his 65th anniversary of ordination to the priesthood.

Vatican City, Jun 28, 2016 / 06:22 am (CNA/EWTN News).- On Tuesday Benedict XVI gave his first public speech since his final day as Pope, expressing gratitude for a lengthy priesthood and for Pope Francis’ “goodness,” which he said moves him deeply.

Speaking to Pope Francis and the College of Cardinals gathered inside the Vatican’s small Clementine Hall for the 65th anniversary of his priestly ordination, Benedict said the Greek word “Efkaristomen (let us give thanks),” expresses “all that there is to say” for the occasion. [That smacks of Modern Greek.  Better is eukaristomen.  In his address, Benedict said both versions.]

“Thank you, thank you everyone! Thank you Holy Father – your goodness, from the first day of your election, every day of my life here moves me interiorly, brings me inwardly more than the Vatican Gardens.”

“Your goodness is a place in which I feel protected,” he said, and voiced his hope that Francis would be able to “move forward with all of us on this path of Divine Mercy, showing Jesus’ path to God.” [Very gracious.]

The June 28 celebration was held for Benedict in honor of the 65th anniversary of his ordination as a priest, which took place June 29, 1951 – the feast of Saints Peter and Paul – in the cathedral of Freising. His older brother Georg, who is still living today and was present for the ceremony, was ordained with him.

After the choir singing sacred polyphony had finished, Benedict listened to brief speeches made by Pope Francis; Cardinal Angelo Sodano, Dean of the College of Cardinals, and Cardinal Gerhard Muller, Prefect of the Congregation for the Doctrine of the Faith.

Cardinal Muller gifted [ = gave] Benedict several copies of a book containing his homilies on the priesthood printed specifically for the occasion of his anniversary. Benedict in turn gave one to Pope Francis.

In his brief, off-the-cuff speech, Benedict thanked both Cardinal Sodano and Cardinal Muller for their speeches, and for the book. [And he didn’t say anything confusing.]

He told Cardinal Sodano that his address, which quoted scripture from the day of Benedict’s ordination and his speech during his visit to Freising in 2006, “truly touched my heart.”

Benedict then returned to the word “Efkaristomen (let us give thanks),” which he recalled a fellow priest ordained on the same day had written on the memorial card for his first Mass. 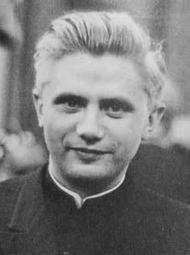 This word, he said, hints not only at “the dimensions of human thanksgiving,” but also “the deepest word that is hidden,” and which appears in both the liturgy and Scripture in the expression “gratias agens benedixit fregit deditque,” meaning “having given thanks, he broke it and gave it.”

“Efkaristomen sends us again to that reality of thanksgiving, to that new dimension that Christ has given,” Benedict said, explaining that Jesus has transformed into thanksgiving “the cross, suffering and all of the evil in the world.”

In doing so, Jesus “fundamentally transubstantiated” life and the world, he said, adding that the Lord both has given and continues to give us daily “the bread of true life, which overcomes the world thanks to the strength of his love.”

Benedict closed his address by expressing his hope that all would, with the help of God, help in the “transubstantiation of the world: that it be a world not of death, but of life; a world in which love has overcome death.”

In his brief speech, Pope Francis told Benedict that “you continue to serve the Church, you do not cease to really contribute with vigor and wisdom to her growth.”

By contributing to the Church and her mission from the small monastery of Mater Ecclesiae inside the Vatican, Benedict represents “anything but these forgotten corners in which today’s culture of waste tends to relegate people when, with age, their strength becomes less,” Francis said.

He prayed that the retired Pope would continue to feel the hand of “the merciful God who supports you,” that he would continue to both experience and bear witness to the love of God, and that alongside Peter and Paul, he would “continue to exult with great joy while walking toward the goal of our faith.”

From ZENIT comes the English translation of Francis’ address to Benedict: 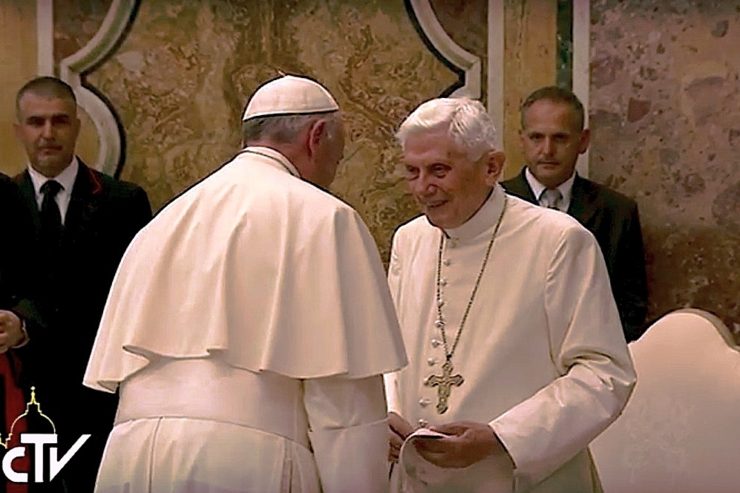 Today we celebrate the history of a call that began sixty-five years ago with Your Priestly Ordination, which took place in the Cathedral of Freising on June 29, 1951. But what is the underlying note that runs through this long history and that from that first beginning up to today dominates it ever more?

In one of the many beautiful pages that you dedicate to the priesthood, you underscore how, at the hour of Simon’s definitive call, Jesus, looking at him, basically asks him only one thing: “Do you love me?” How beautiful and true this is! Because it is here, you tell us, it is in that “do you love me,” that the Lord founded the feeding, because only if there is love for the Lord can He feed through us: “Lord, you know everything; you know that I love you” (John 21:15-19). This is the note that dominates a whole life spent in priestly service and true theology that you have not accidentally described as “the search for the Beloved”; it is this that you have always witnessed and still witness today: that the decisive thing in our day – of sun or rain – that alone with which all the rest comes, is that the Lord be truly present, that we desire Him, that we be close to Him interiorly, that we love Him, that we truly believe profoundly in Him and believing that we truly love Him. It is this loving that truly fills our heart, this believing is what makes us walk safely and calmly on the waters, even in the midst of a storm, in fact as happened to Peter; this loving and this believing is what enables us to look to the future, not with fear and nostalgia, but with gladness, also in the now advanced years of our life.

And so, precisely by living and witnessing today, in such an intense and luminous way, this only truly decisive thing – to have our gaze and heart turned to God – you, Holiness, continue to serve the Church, do not cease to truly contribute with vigor and wisdom to her growth; and you do so from that small Mater Ecclesiae Convent in the Vatican, which reveals itself to be altogether something other than one of those forgotten corners in which the disposable culture of today tends to relegate individuals when, with age, their strength fails. It is altogether the opposite; and allow your Successor to say this forcefully, who chose to call himself Francis! Because Saint Francis’ spiritual journey began at San Damiano, but the true place he loved, the beating heart of the Order, there where he founded it and where finally he rendered his life to God was the Porziuncola, the “small portion,” the little corner near the Mother of the Church; near Mary that, because of her very firm faith and her living so entirely of love and in love with the Lord, all generations call Blessed. Thus, Providence willed that you, dear Brother arrive in a place so to speak precisely “Franciscan” from which emanates a tranquillity, a peace, a strength, a trust, a maturity, a faith, a dedication and a fidelity that do me so much good and give strength to me and to the whole Church.

The wish with which I desire to conclude is therefore a wish that I address to you and together with all of us and with the entire Church: that you, Holiness, be able to continue feeling the hand of the merciful God that supports you, that you be able to experience and witness to us the love of God; that, with Peter and Paul, you be able to continue to exult with great joy while you journey toward the goal of the faith (cf. 1 Peter 8-9; 2 Timothy 4)!

Fr. Z is the guy who runs this blog. o{]:¬)
View all posts by Fr. John Zuhlsdorf →
This entry was posted in Benedict XVI and tagged anniversary of ordination, Benedict XVI. Bookmark the permalink.