In the ancient world, invective was a standard tool of debate.  Interlocutors would often pour acid on each other in a way we today… well, perhaps not some who read blogs today… find quite unsettling.

St. Jerome (+420), not known for his easy-going, gentle character, genuinely had if out for St. Ambrose of Milan (+397) and didn’t spare him one little bit.

My conjecture is that Jerome was jealous of Ambrose, who had “made it” in the Church in Italy, whereas Jerome always played second fiddle. But I digress.

What’s with Jerome about Ambrose?

To get at this we have to bring in a third character, Tyrannius Rufinus of Aquileia.

You are no doubt aware that Jerome and his old friend of his youth Rufinus (+410) had a titanic clash over the writings and teachings of the early Alexandrian exegete Origen.

When Jerome and Rufinus were young, they were very close, forming part of a group of dedicated Christians at Aquileia and then later at Jerusalem. They began to argue over the theology of Origen, but they patched things together before Rufinus left Palestine for Italy.

However, once in Italy Rufinus began to translate Origen Peri archon (De principiis). In his preface Rufinus made the mistake of assuming that just because Jerome had translated some of Origen’s work, therefore Jerome was a fan of Origen. People around Jerome also thought Rufinus purposely made Origen sound more orthodox than he was. These folks wrote to Jerome to let him know what they thought Rufinus was up to and asked Jerome to explain what was going on.

In response Jerome translated Origen himself.

In a letter he strongly denied being a partisan of Origen’s theology, even though he admired Origen’s skill. Jerome focused his laser on Origen’s statements about the resurrection and the preexistence of souls, and how the Persons of the Trinity related to each other which made him sound like a subordinationist. Jerome, in this second phase of translation, interpreted Origen in a very strict and harsh way. When you look at the way Jerome spoke of Origen the first time around, 12 years before, and what he did to him in the second round, it is pretty clear that this was a reaction to Rufinus’s written assumption about Jerome. Jerome was afraid that his own reputation was going to be damaged by a positive association with ideas which seemed very strange to many people, especially in the West.

In short, Jerome turned savagely on both Origen and Rufinus in order to defend his reputation. In defending himself Jerome was a little less than sincere.

Rufinus responded, of course. He had to. Rufinus pointed out, for example, that in a commentary on Ephesians Jerome had referred without objection to ideas of Origen about the preexistence and fall of souls into bodies. There are other points as well. Jerome responded with vitrolic force saying that some people (e.g., Rufinus), “love me so well that they cannot be heretics without me.”

Of course the ways of saints are strange and fraught with problems.

The postal service, or lack of one, actually plays an importance role in all of this.

Jerome wrote a friendly letter to Rufinus assuring him of his high esteem and speaking of their past friendship and the passing of his mother. He expressed his desire to avoid a public fight.

The letter never reached Rufinus. Jerome’s “friend” Pammachius kept it, and published instead a letter of Jerome which accompanied his translation of Origen’s De principiis.

Not having seen Jerome’s irenic gesture, Rufinus published his Apology, in response to Jerome the attacker.

And now we arrive finally at the point of this entry.

In Book II of his Apology, Rufinus points out how Jerome had attacked Ambrose. He mentions Ambrose’ work De Spiritu Sancto. Thus, Rufinus about Jerome’s view of Ambrose.

Rufinus relates more of Jerome’s disdain for his “rival” in Milan (Apology 2,23-25) as he digs into accusations of plagiarism which were being hurled around.

Rufinus says in 2, 23 that Jerome referred to Ambrose as a raven, a bird of ill omen, croaking and ridiculing in an strange way the color of all the others birds on account of his own total blackness… 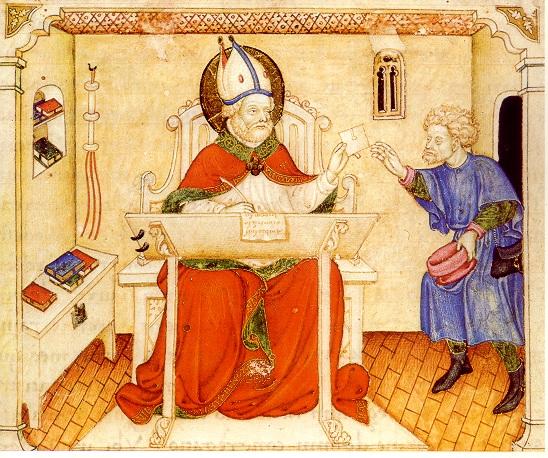 And from Jerome’s own pen we have this vicious attack on Ambrose (ep. 69,9).

Jerome was writing in the year of Ambrose’ death, 397, to a Roman named Oceanus who wanted Jerome to help him fight against a bishop in Spain who had married a second time. Jerome tells Oceanus to drop it, since that bishops’ first marriage had been before baptism.

However, Jerome uses the occasion to take a somewhat less than oblique swipe at Ambrose.

Jerome, who had probably been disappointed that he hadn’t been made bishop of Rome, surely felt the sting of this meteoric rise of Ambrose.

In any event, listen to Jerome:

One who was yesterday a catechumen is today a bishop; one who was yesterday in the amphitheater is today in the church; one who spent the evening in the circus stands in the morning at the altar: one who a little while ago was a patron of actors is now a dedicator of virgins. Was the apostle ignorant of our shifts and subterfuges? Did he know nothing of our foolish arguments?

Okaayyyy! That’s a big “NO!” vote from Jerome.

Regardless, today is the feast of St. Ambrose, who seemed to bring out both the worst and the best in people.

Fr. Z is the guy who runs this blog. o{]:¬)
View all posts by Fr. John Zuhlsdorf →
This entry was posted in Linking Back, Patristiblogging, Saints: Stories & Symbols, Throwing a Nutty and tagged jackdaw, Origen, Rufinus, St. Ambrose, St. Jerome. Bookmark the permalink.