STOP THE PRESSES: Bad news for liberals who have hijacked Pope Francis!

Here is something that really caught my eye.

FORWARD: There is a school of interpretation of Vatican II, the so-called “Bologna School”, which has dominated for decades.  They are acolytes of a hermeneutic of discontinuity and rupture.  A few years ago, however, a Vatican official officially dissented and fought back with a book.  Archbp. Agostino Marchetto (with whom I lived for a few years – that’s the place where Card. Bergoglio would have met Marchetto) published a book which blasted apart the position of the Bologna School.  It was published by the Vatican press.  SEE BELOW.

At Settimo Cielo of Sandro Magister … my translation: 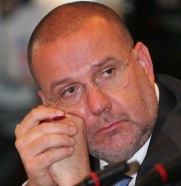 Melloni and Company in mourning, betrayed by “their” Pope

No one expected an assessment like this from Pope Francis.  But is came.  And it is resounding.

“I once told you, dear Archbishop Marchetto, and today I repeat it, that I consider you the best hermeneutical interpreter of the Second Vatican Council.”

In Bologna, in the sanctuary of that “school” directed now by Prof. Alberto Melloni, which has had the global monopoly on interpretation of Vatican II, they’ll have lowered their flags to half staff.

Because Agostino Marchetto has always been their bête noire, their most unyeilding critic.

The “Bologna-ites” had attached even Benedict XVI to their interpretation of the Council. Up to yesterday, all enthusiastic, they said about Pope Francis that “he speaks little about the Council because it is implementing in his deeds”, in their way, of course. Meanwhile they never replied precisely to Marchetto’s criticisms. Simply put, they made them into jokes, they laughed at him.

And now they find themselves before “the best interpreter of the Council”, awarded the honor by no less than the teacher’s pet, Jorge Mario Bergoglio.

The Pope’s acknowledgement of Marchetto was made public on 12 November, on the occasion of the presentation at the Campidoglio of a book in his honor, edited by the Libreria Editrice Vaticana.

Here is the text of the Pope’s letter: [I’ll translate this into American… an Italian epistolary style can sound ridiculous when rendered literally.]

With this letter I want to be present with you and unite myself to the presentation of the book “Primato pontificio ed episcopato. Dal primo millennio al Concilio ecumenico Vaticano II” (Pontifical primacy and the epicopacy: from the first millennium to the Second Vatican Ecumenical Council) Please consider me present in spirit.

The topic of the book is an homage to the love that you have for the Church, a love that is, at the same time, loyal and poetic. Loyalty and poetry are not an object for the market: they cannot be bought or sold, they simply are virtues rooted in a heart of a son who feels the Church to be his Mother; or, to be more precise, and to say it with a familiar Ignatian “tone”, as “Holy Mother Hierarchical Church”. [HIERARCHICAL!]

You have manifested this love in many ways, including correcting an error or imprecise comment on my part – and I thank you for that from my heart – but above all it is manifest in all its purity in the studies on the Second Vatican Council. I once told you, dear Archbishop Marchetto, and today I wish to repeat it, that I consider you to be the best interpreter of the Second Vatican Council. I know that this is a gift from God, but I also know that you made it bear fruit.

I am grateful to you for all the good that you do for us with your witness of love for the Church and I ask the Lord that he reward it abundantly.

I ask you please not to forget to pray for me. May Jesus bless you and the Holy Virgin protect you. 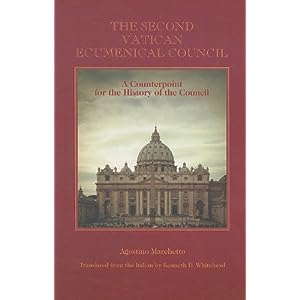 If you want Marchetto’s book about the “School of Bologna” and interpretations of the Second Vatican Council it is in English.  Marchetto kindly inscribed my copy when it first came out.

The Second Vatican Ecumenical Council: A Counterpoint for the History of the Council

Click HERE or on the image to buy the book in English.

In light of all this, I direct the readership to a piece at National Schismatic Reporter.  Here are a few take-away quotes… (make popcorn):

Calling Pope Francis “Vatican II high octane,” longtime church historian Jesuit Fr. John O’Malley said last week he sees real potential for church reform, even if it’s just from the new tone and message coming out of Rome.
“With Francis, there is no mincing of words. You know where he stands, and you can’t give it a spin,” O’Malley, an expert on the church’s ecumenical councils, told NCR Oct. 17 before speaking at an event sponsored by Rockhurst University and four other Catholic colleges.  [ROFL!  Nope, you sure can’t spin Francis, can you.  MARCHETTO is right.]

In response to the question many Catholics are asking of whether a new council will be called, O’Malley chuckled and quoted a fellow Jesuit, Fr. James Martin: “We’ve had Vatican III on March 13, 2013” — the day Francis was elected to replace Pope Benedict.

Today has been a good day for the team.

In its description of Archbishop Marchetto’s The Second Vatican Ecumenical Council: A Counterpoint for the History of the Council, published in English in 2010, the University of Chicago Press states:

This important study by Archbishop Agostino Marchetto makes a significant contribution to the debate that surrounds the interpretation of the Second Vatican Ecumenical Council. Archbishop Marchetto critiques the Bologna School, which, he suggests, presents the Council as a kind of “Copernican revolution,” a transformation to “another Catholicism.” Instead Marchetto invites readers to reconsider the Council directly, through its official documents, commentaries, and histories.In a recent essay published in L’Osservatore Romano, Cardinal Kurt Koch, the president of the Pontifical Council for Promoting Christian Unity, wrote that the interpretation of the Council offered by Archbishop Agostino Marchetto is more relevant than ever. Archbishop Marchetto, wrote Cardinal Koch, has “taken up and deepened the hermeneutic of reform supported by Pope Benedict XVI.”

Fr. Z is the guy who runs this blog. o{]:¬)
View all posts by Fr. John Zuhlsdorf →
This entry was posted in "How To..." - Practical Notes, Brick by Brick, Our Catholic Identity, The Drill, Vatican II and tagged Agostino Marchetto, hermeneutic of continuity, hermeneutic of discontinuity and rupture, Pope Francis, School of Bologna, Vatican II. Bookmark the permalink.