US Navy and China faceoffs – disturbing 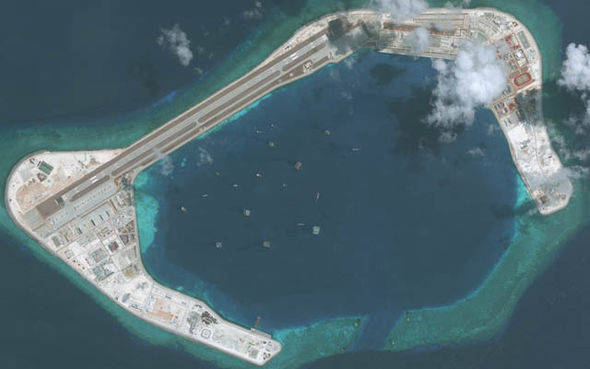 China fires SIX WARNINGS to US Navy in South China Sea ‘This is China…LEAVE IMMEDIATELY’
THE Chinese military told a US Navy plane flying over the highly-disputed island in the South China Sea to “leave immediately”.

The US Navy P-8A Poseidon jet was flying at 16,500 feet to get a view of low-lying coral reefs that have been turned into garrisons with five-storey buildings, large radar installations, power plants and runways sturdy enough to carry large military aircraft.

During the flight that was giving journalists from CNN a rare look at the islands, the crew was warned six times by the Chinese military to get out of their territory.

A voice said: “US military aircraft, this is China … leave immediately and keep out to avoid any misunderstanding.”

Each time the aircraft was challenged by the Chinese military, the US Navy crew’s response was the same.

The repsonse was: “I am a sovereign immune United States naval aircraft conducting lawful military activities beyond the national airspace of any coastal state.

“In exercising these rights as guaranteed by international law, I am operating with due regard for the rights and duties of all states.”
CNN was granted the chance to see how the Chinese government is rapidly expanding its militarisation efforts from a US reconnaissance plane when the harsh threat was issued.

The US Navy jet had flown over four key artifical islands in the Spratly chain where China has built up fortifications: Subi Reef, Fiery Cross Reef, Johnson Reef and Mischief Reef.

China is building up … stuff all over the world. I understand they built a huge antenna array in Mexico. They are building bases on artificial islands all along the sea lanes in the S. Pacific.

Fr. Z is the guy who runs this blog. o{]:¬)
View all posts by Fr. John Zuhlsdorf →
This entry was posted in Semper Paratus, Si vis pacem para bellum!, The Coming Storm and tagged China. Bookmark the permalink.