In the Gospel we read: "And he called to him the multitude with his disciples, and said to them, ‘If any man would come after me, let him deny himself and take up his cross and follow me.’" (Mark 8:34) Christ has been interrogated, humiliated, excoriated, beaten, exposed to ridicule and condemned. The Jews called down His Blood upon their heads and choose to call for mercy for a criminal rather than their Messiah. Now the Lord will begin the last foot journey, though part of it will be made on His bloody hands and knees. He gives concrete witness to what he taught His followers: "Take my yoke upon you, and learn from me; for I am gentle and lowly in heart" (Matthew 11:29).

During the carrying of the Cross, there were some who followed the Lord. The "daughters of Jerusalem" followed the Lord and He told them to week for themselves and their children. (Luke 23:28) Cyril of Alexandria (+444) writes:

He was going to the place of crucifixion. Weeping women, as well as many others, followed Him. The female sex tends to weep often. They have a disposition that is ready to sink at the approach of anything that is sorrowful. "Daughters of Jerusalem, do not weep for me, but week for yourselves and for your children. For behold, the days are coming when they will say, ‘Blessed are the barren, and the wombs that never bore, and the breasts that never gave suck!’" How did this happen? When the way came on the country of the Jews, they all totally perished, small and great. Infants with their mothers and sons with their fathers were destroyed without distinction. He then says, "Then they will begin to say to the mountains, ‘Fall on us’; and to the hills "Cover us.’" In extreme miseries, those less sever misfortunes become, so to speak, desirable. [Commentary on Luke, Homily 152]

The Rosary can help us put things into perspective. The day’s business will often distract us from very important things, such as the contemplation of our judgment. What seems terrifically difficult here and now might, in the long run, not be so very difficult after all. With each Hail Mary, we remind ourselves of the Four Last Things. With this repetition, we can gain some perspective. On that note, the Lord continues with enigmatic phrase, hard to understand. The Fathers tried to break it open. Jesus said: "For if they do this when the wood is green, what will happen when it is dry?" (Luke 23:31). The lyrical Ephrem the Syrian (+373) comments:

The Lord said, "If they do that to the green wood." He compared His divinity with the green wood and those who received His gifts to the dry wood. What is green bears fruit, as these words that He spoke testify: ‘For which of my works are you stoning me?" (John 8:46) If I suffer to this extent, although you have found no sin in me, which of you will convict me of sin? (John 8:46) Since you have invented a pretext to dispose of me, how much more will you suffer?" Perhaps He was referring the green wood to Himself, because of the miracles He had done. He called the righteous who were without virtue the dry wood. They are the fruit of this green wood, and they rejoiced beneath its foliage. Then they took it in hatred and destroyed it. What more will they do to the dry wood, which does not even have a sprout? What more will they do to the ordinary righteous people who do not work miracles? [Commentary on Tatian’s Diatessaron 20.21]

Trust too much in the world lately?

Another now famous figure accompanied Jesus with His Cross. Simon of Cyrene was constrained to help the Lord carry His burden. The same Ephrem comments:

After He took up the wood of His Cross and set out, they found and stopped a man of Cyrene, that is, from among the Gentiles, and placed the wood of the Cross on him. It was only right that they should have given the wood of the Cross voluntarily to the Gentiles, since in their rebellion, the Jews rejected the coming of Him who was bringing all blessings. In rejecting it themselves, in their jealousy, they threw it away to the Gentiles. They rejected it in the jealousy and the Gentiles received it, to their even greater jealousy. The Lord approved the welcoming Gentiles and this provoked jealousy among their contemporaries through the Gentile’s acceptance. By carrying the wood of His Cross Himself, Christ revealed the sign of His victory. Christ said that another person would not pressure Him into death, "I have power over my life, to lay it down or to take it up again." (John 10:18) Why should another person have carried the Cross? This showed that He, in whom no sin could be found, went up on the Cross for those who rejected Him. [Commentary on Tatian’s Diatesseron 20.20]

Again we see how the theme of the shift from the Jews to the Gentiles is taken up. 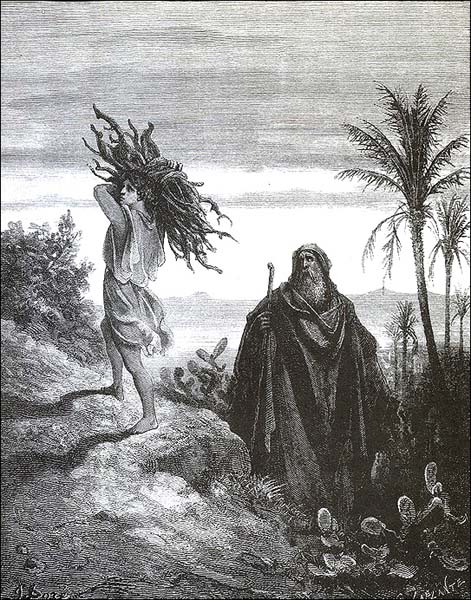 The carrying of the wood up Golgotha, was seen as symbolic by the Fathers, foreshadowed in a well-known event in the Old Testament. Here is Cyril of Alexandria:

When Blessed Abraham went up the mountain that God showed him so that he might sacrifice Isaac according to God’s command, he laid the wood on the boy. Isaac was a type of Christ carrying His own Cross on His shoulders and going up to the glory of His Passion. Christ taught us that His Passion was His glory. He said, "Now is the Son of Man glorified, and in Him God is glorified; if God is glorified in Him, God will also glorigy Him in Himself, and glorify Him at once." (John 13:31) [Commentary on Luke Homily 152]

Fathers such as Origen of Alexandria tended to find in events and people of the Old Testament foreshadowings or "types" of what would occur in the mysteries of Christ’s life, which we meditate on in the Rosary. Here the figures of Abraham and Isaac are together "types", foreshadows, of Christ as simultaneously Priest and Victim, Abraham with the knife, Isaac with the wood, both ascending the hill.

The Rosary can help us to steel ourslves for the reality of the Lord’s invitation to take up our own Cross and follow Him. Epiphanius the Latin (5th c.) comments on the yoke and our reluctance:

Therefore let everyone who whan life and desires to see good days put down the yoke of iniquity and malice. The prophet says, "Let us burst their bonds and thrust their yoke from us." (Ps 2:3) For unless one throws behind the yoke of iniquity, that is, the spark of all vices, one cannot take up the agreeable and light yoke of Christ. But if the yoke of Christ is so agreeable and light, how is it that divine religion seems so harsh and bitter to some people? It is bitter to some because the heart that has been tainted by earthly desires cannot love heavenly things. It [the heart] has not yet come to Christ, so that it can take up His yoke and learn that He is gentle and humble of heart. Hence we observe, my dearest friends, from the teaching of our Lord, that unless a person is gentle and humble of heart, he cannot bear the yoke of Christ. [Interpretation of the Gospels 26 PG 56:780]