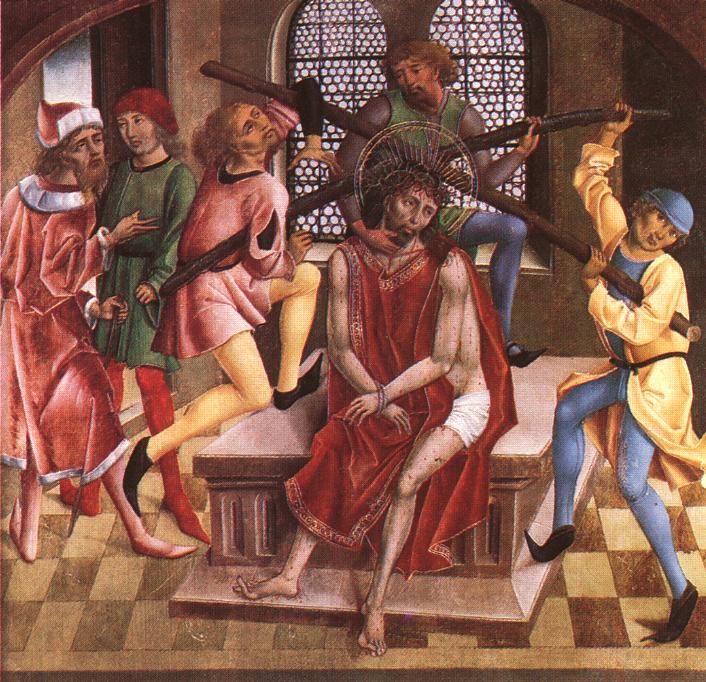 One of the wonderful things which exploring the Fathers can teach us is how to savor each and every detail of the Scriptures. After many decades of Scriptural deconstruction and over-application of the historical critical method, with its "hermeneutic of suspicion" we can benefit from a refresher on how to approach Scriptures through the example of the Fathers.
For the Fathers, the details in the accounts of the Scriptures were laden with significance. Let us listen for a moment to St. Hilary of Poitiers (+367) on the torment Christ suffered in this Third Sorrowful Mystery:

The beaten Lord is dressed in a scarlet robe, a purple cloak and a crown of thorns, and a reed is placed in His right hand. Bending their knees before Him, they mock Him. Having taken upon Himself all the infirmities of our bodies, He is covered with the scarlet blood of all the martyrs destined to reign with Him, and He is cloaked with the high honor of the prophets and patriarchs in purple cloth. He is also crowned with thorns, that is, with the former sins of the remorseful Gentiles, so that the glory might derive from the destructive and useless things, plaited on His divine head, which they contrive. The sharp points of the thorns aptly pertain to the sins from which a crown of victory is woven for Christ. The reed symbolizes the emptiness and weakness of all those Gentiles, which is held firm in His grasp. His head, moreover, is struck. As I believe, not much harm was done to His head being struck with a reed; however, the typical explanation for this is that the bodily weakness of the Gentiles that was previously held in Christ’s hand finds comfort now in God the Father, for He is the head (cf 1 Cor 11:3). But amid all this, while Christ is mocked, He is being adored. [On Matthew 33.3]

The details are meaningful. A robe is put on the Lord. The robe is stripped off. The writer Appolinaris says:

The cloak itself represents the blood shed by the world and the people in it. The Savior was put to death for the salvation of all. But they who are choked by "worries, wealth, and pleasure" have received the word of God but have not borne fruit. (Luke 8:14) They weave thorns togethe and crown Jesus with them, dishonoring Him…. Those who deemed His Kingdom to be of little value placed a reed in His right hand. [Fragment 139]

Remember: Christ died for all but only many will actually be saved! We can choke off the fruits of our salvation with the strangling thorny weeds of sin.

The creative Origen (+254) has more on the robe and the crown:

So now, in taking up the "scarlet robe", He took upon Himself the Blood of the world, and in that thorny "crown" plaited on His head, He took upon Himself the thorns of our sins. As to the robe, it is written that "they stripped Him of the scarlet robe". But as to the crown of thorns, the Evangelists mention nothing further. Apparently they wanted us to determine what happened to that crown of thorns placed on His head and never removed. My belief is that the crown of thorns disappeared from the head of Jesus, so that our former thorns no longer exist now that Jesus has removed them from us once and for all on His own distinguished head. [Commentary on Matthew 125]

Consider the famous line of Isaiah 1:18: "Come now, let us reason together, says the LORD: though your sins are like scarlet, they shall be as white as snow; though they are red like crimson, they shall become like wool." "Reason together"…. Pope Benedict XVI would love that.

There is no sin so terrible we finite little mortals can commit that the infinite power of our merciful God cannot forgive. Not only forgive, but wash clean, washed pure and away from our souls as if it had never been there. At our judgment, they will not be held against us, provided we receive their cleansing in the way He desired us to receive it: especially in the sacrament of penance. That sacraments takes your sins away so they are not there. Cloaked with the scarlet of our sins, the Lord is then stripped of the cloak. But, alas, the thorns of their memories remain, do they not?

The interesting and ecclectic Chromatius of Aquileia (+407)gives us a reflection on the mysterious kingship of the Lord. Remember that Jesus had already had a surprising exchange with the cowardly Pilate about His kingdom:

These things were done to mock Jesus. But now we know these things happened through a heavenly mystery. Wickedness was at work among the former; among the latter, the mystery of faith and the light of truth. In the purple tunic Christ is dressed as a king; and in the scarlet robe, as prince of martyrs, He is resplendent as precious scarlet in His sacred Blood. He receives the crown as conqueror, for crowns are usually bestowed upon conquerors. He is adored as God by people on bended knees. Therefore He is vested in purple as king, in scarlet as prince of martyrs; He is crowned as conqueror, is hailed as Lord and is adored as God. We can recognize in the purple cloak also the Church, married to Christ the King and resplendent with regal glory. Hence it is called by John in the Revelation a "royal nation". (Rev 1:6; cf. 1 Pet 2:9) As to this purple cloth, we read in the Song of Solomen: "His whole bed is purple." (Cant 3:10) For Christ rests on that bed where He is able to find purple cloth, that is, royal faith and a beautiful spirit…. The crown of thorns which the Lord received on His head stands for our community, which came to faith from the Gentiles. At one time we were thorns, that is to say sinners. Believing now in Christ, we have become a crown of righteousness, for we no longer cause pain or harm to the Savior. Rather, we surround His head with our profession of faith while we praise the Father in the Son, because the head of Christ is God, as the apostle says. (1 Cor 11:3) This is the crown foretold by David in a psalm: "You placed a crown of precious stones on His head." (Ps. 21:3 (20:4 LXX) We were thorns at one time, but after we were included in the crown of Christ, we became precious stones. For he, who raised up children of Abraham from stones, made precious stones out of thorns. (Matthew 3:9) This scriptural passage did not consider of trivial importance the fact that a reed was placed in the Lord’s right hand. Note what David says about Christ in the psalm: "My tongue is the pen of a ready writer" (Ps 45:1 (44:2 LXX). As He was about to suffer, therefore, He took up the reed in His right hand so that with a heavenly notation He might pardon our misdeeds or inscribe His law in our hearts with divine letters. As He says through the prophet: "I will put my law within them." (Jer 31:33) We may also infer other things about the reed, for it has many spiritual meanings. A reed that is hollow and without pith connotes the Gentile people, who were once without the pith of God’s law, empty of faith and devoid of grace. Therefore this type of reed, that is, the Gentile people, is put in the Lord’s right hand, for His left had already contained the Jewish people who were persecuting Him. [Tractate on Matthew 19:1-4]

ascinating connections here, no? Take note that the Fathers I cite bring the Gentiles into the symbolism of the details, in slightly different ways. But what I find interesting about the imagery of Chromatius is how he suggests that the praying assembly of the Church is like the crown of thorns. Some wag might wrying respond, "Yah, and the thorns are still pretty painful when I look around at people at Mass, too, especially the ‘priest’ and ‘song leaders’!" Still, this is a wonderful thing to think about. By the sacraments, we are made more and more like a temple made of living stones. Stones seem woven together when they are laid and cemented into walls and floors. When they form a church building they surround the Body and Head of Christ, the priest and the congregation. The thorns are like stones, for Chromatius. It might be interesting to think of this when you are having problems or difficulties with people, even at Mass. Think about them as thorns, like yourself, causing suffering but… but… destined for glorious transformation. Christ died for each thorn and by each thorn. The goal was not the tomb, but the resurrection.

Notice also how Chromatius makes a connection between the hollow reed in Christ’s hand and the hollow pen with which He can write. He can write our name in the Book of Life. He can strike through our name as well. It depends on us. When we receive the sacrament of baptism and, later, penance, our souls are wiped clean. They are like a perfect white parchment waiting to receive its words, to be over written. Shall he offer it to the King of Glory or to the Prince of this world, the Enemy of the soul? Before the Lord received His thorns from us and the reed and the blows that went with them, He told Pilate in no uncertain terms: "I will no longer talk much with you, for the ruler of this world is coming. He has no power over me; but I do as the Father has commanded me, so that the world may know that I love the Father. Rise, let us go hence." (John 14:30-31) "Non habet in me quidquam…" Does the Prince of this world have anything on you?

Recitation of the Rosary can give us some clarity about the state of our own souls, as we pray again and again about the hour of our own death. With death comes judgment. God’s justice we will receive whether we want to or not, but His mercy is always there for the asking.