What Does The Washing of Feet Really Say? 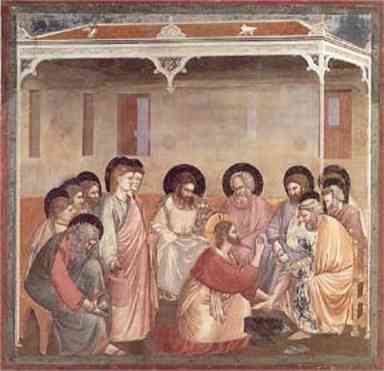 In one of the other internet projects I am involved in, the Catholic Online Forum, in 2004 I once wrote a short piece on the issue of the washing of feet on Holy Thursday.  I reproduce it here (adapted and edited).

Each year there is recurring set of abuses of the people of God that take place during the Sacred Triduum.

First there is vile abuse of the people through illicit "general absolution". That will need its own treatment.  Second there is the silliness surrounding washing the feet of women during the Mass of Holy Thursday.

People get pretty emotional about this topic.  Any priest who decides actually to obey the Church’s laws finds that he is being fried on the third rail. I know a few priests who have exercised their option not to have the rite at all because some angry women were carping at him about not being treated equally and there was no reasoning with them, no explanations possible.

However, it may also be possible that they really were not able to explain it clearly: they know the truth about this rite, but sometimes in the life of a busy pastor having a sense of something isn’t the same as theological clarity.  They wind up unable to put thoughts into clear words.

Here is my explanation.  Keep in mind I fully believe that just stating the law of the Church ought to be enough.  There are many other possible explanations, of course.  We cannot reduce Christ’s actions to single layers.  Still, our faith calls us to seek understanding.  I want to understand why the Church now washes the feet of men and not of women.

There is discussion of the significance of viri selecti. Why “males only”?  That is what viri selecti means and any use to the contrary is a liturgical abuse which creates confusion and scandal.  Disobedience cause negative fruits.  On the other hand, positive fruits come from the proper observance of this rite. That said, what is the meaning of this rite?

I am going to get rather theological here. Here are some of the theological “hooks” I will hang my thoughts, some guiding principles.

1)  The priest is alter Christus. In the Mass the priest is Christ, the Head of the Body, acting as priest and victim, mediator for the people.

3)  Christ Himself is the real actor at every Mass. Sometimes Christ is acting in the person of the priest, the Head, in the persons of the congregation, the Body, and the Totus Christus, the Christ Entire, Body and Head together. This is made manifest in the liturgy through outward gestures and spoken or sung words.

5)  When the priest acts as the Head and for himself, there is always a dimension of the action or words that include the people, for he does not stop being a mediator. However, people are able to view or hear what the priest is doing for himself sometimes more, and sometimes less, according to the indications of the rubrics which acknowledge this distinction.

Therefore, some things that the priest does all by himself and for himself in the context of Mass can nevertheless be viewed by others but that does not mean that the congregation is the principle "audience" or recipient of those things, even though they might be edified in the meantime.

Moving to the second part:

When we discuss the meaning of Christ washing feet of Apostles in the Scripture alone, or rather, outside of Mass, or even better, outside the Mass of Holy Thursday, then it is reasonable and logical to think about how Christ is first and foremost giving an example to His disciples that they should serve each other in humble charity.

However, in the context of the Mass of Holy Thursday, we have an entirely different dynamic. This is the Mass about the institution of the Eucharist and of the sacramental priesthood.  It is not so much about the priesthood of the baptized.

The sacramental priesthood is so important in the Church that there are moments when it gets to be underscored all by itself. This is one of them.

When the priest washes feet at Holy Thursday you see alter Christus once again acting to wash the feet of the Apostles, iconically symbolized by the men chosen for the rite. Remember that, in liturgical and sacramental terms, what we do in Mass makes those mysteries present to us again.  Christ washes His Apostles feet.  Just as the iconic argument is decisive in the ordination of men alone, it is also decisive in the selection of males only in this particular moment.

What you are being privileged to view in the rite of washing of feet, the Mandatum, is a moment when (in Holy Mother Church’s liturgy) Jesus Christ is teaching the priest, the alter Christus, that his priesthood is one of service to the rest of the Church. When the congregation sees this, they are being taught something about the role of the priest.  The viri selecti being ministered to by Christ, alter Christus, symbolize the future priests Christ chooses for service to the rest of the Church.

Put another way, the Church in this rite is hammering into the priest that he is alter Christus, acting once again in the manner of Christ at the Last Supper.   It is an object lesson.  It is primarily for the priest’s benefit and edification that this is undertaken in the context of the Holy Thursday Mass, and secondarily for the benefit of the lay people who witness it: they learn something more about the sacramental ordained priesthood on the night it was instituted.

This is no way excludes other teachable and learnable content for the entire people of God.  However, this particular Mass is not just about everyone’s priesthood by baptism. Of course, it is perfectly okay that people take away also the lesson that they are to serve their fellow man, that all Christians must "wash feet" as it were.

There are all sorts of other wonderful things to derive from this rite.  For example, in his sermon for the Mass in question today, Holy Thursday, Pope Benedict in his first celebration of this Mass as Pope, made a fabulous connect between the washing of feet and our preparation for Holy Mass and Communion.  The washing of feet by the priest at Mass, is a sign of how the Christ in the sacrament of penance removes also the filth from our souls.  Christ is perpetually on His knees before each one of us, ready to wash us clean when we are dirty.   The possibilities are endless.

Returning to my theological and liturgical "hooks", I see this rite a moment in which the congregation is being allowed to witness something which is a matter of profound intimacy between Christ the High Priest and the priest alter Christus. You are being allowed to see and hear a dialog that is not really intended primarily for your ears.

Remember, Peter did not grasp Christ’s explanation when He said, “What I am doing you do not know now, but afterward you will understand".  Jesus said to Peter, “If I do not wash you, you have no part in me.” Simon Peter said to Him, “Lord, not my feet only but also my hands and my head!” Jesus said to him, “He who has bathed does not need to wash, except for his feet, but he is clean all over; and you are clean, but not every one of you.” For He knew who was to betray Him; that was why He said, “You are not all clean.” (John 13:7-11) One of them was not clean because He was going to betray the Lord and also betray the solemn charge laid on him to serve in the manner of an alter Christus among the people. He was betraying his priesthood and not merely Christ Himself. Again, this is in the context of the Mass of Holy Thursday, not just any Mass. Washing the feet of men underscores the connection between Christ’s washing His Apostles feet (service) and the institution of Holy Orders (service).

Try seeing this another way next time you witness it.

The Church is teaching the PRIEST who he should be. The priest, as your servant in your parish, shows in his words and deeds and instruction also how you should be to each other. The priest forms you lay people. However, this time you are being allowed to watch part of the priest’s own ongoing formation from Christ Himself in action in the Church’s liturgy. You are witnessing your priest being shaped into the kind of priest Christ wants for you.

To my mind, THAT is the meaning of this rite. This is why there cannot be the confusion of roles and the confusion of icons and images in this moment in this Mass on this day. This is a male thing, speaking to the needs of a male priest, needing to be shaped by the male Christ into the kind of priest who is your spiritual father.

I repeat: this does not exclude the other possible meanings of how Christians should minister to each other.  It is the context that focuses us on this particular dimension of Christ’s action, which has many layers of meanings.

I am sure that there is lots of emotion being stirred up in this. I am sure that some find it “meaningful” to see women have their feet washed.  However, that completely obscures the moment of this Mass and this moment of the Sacred Triduum.   I think it is just plain wrong on many levels.

I hope this clarifies some things or provokes some thought about the rite.

Please pray for me, since I will be doing this in a few short hours.