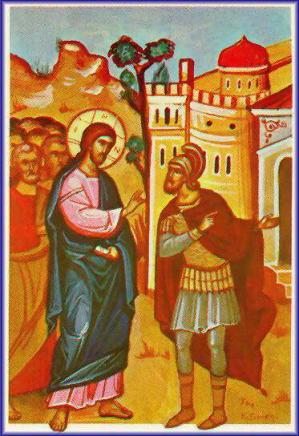 We have been looking extensively at "dew".  Another of the controverted proposed translations for the texts of Mass concerns the words before reception of Holy Communion: "I am not worthy that You should enter under my roof… Non sum dignus ut intres sub tectum meum".  To quote a recent editorial "What does that mean"?   Perhaps the Fathers of the Church can help us understand this phrase.

The great Doctor of Grace, St. Augustine (+430) begins his Exposition of Psalm 46 with an interesting phrase, revealing his deep reverence for Scripture and its power in us.  Before we get into the "roof" stuff, this is how he begins his sermon to his flock:

1. Through the holy book that make up His Scriptures, the Lord our God has poured out for us the faith in which we live, and on which we live; and he has done so in a great variety of different modes.  He constantly varies the words He uses, and these words are laden with mysteries;  but he commends to us one same faith through them all.  The same thing is expressed in many different ways so that the mode of expression may always seem fresh and never bore us, but the underlying truth be held firmly and maintain our hearts in unity….   When God laid down regulations about animals that chew the cud being classed as clean, he meant to teach us by this reference to rumination that each of us should consign what we hear to our hearts, and not be slow to mull over it afterwards….  This is why the same truths are spoken in different ways, giving us the opportunity to find delicious new flavors in what we already know, and enticing us to listen to them again with delight; for when the idiom is diversified, the ancient truth seems ever new as it is presented differently.

Did you catch the echo of Augustine’s description of God in the Confessions as “beauty ever ancient, ever new”?  For Augustine, Christ Himself is speaking in the words of Scripture.  Sometimes Christ as the Head of the Body is speaking to the Father.  Sometimes Christ speaks to the Father as the Body.  At other times Christus Totus, Christ whole and entire speaks.  We can see what happens in Holy Mass as being according to the same paradigm.  More on this later.

Let us look at what Augustine says about the Centurion and his words about the Lord entering “under the roof” of his dwelling.

Augustine has been talking about how the Jews, as the children of Abraham were told by the Lord to do the “works of Abraham” if they were indeed his children.  He addresses himself to the phrase “princes of the peoples… principes populorum”.   He moves from the attitude of the “princes” among the Jews to the “princes” among the Gentiles who are also being gathered together under the God of Abraham.  Among these “princes of the peoples” are, according to Augustine, the Centurion of Matthew 8 and Luke 7.

Augustine is sitting and preaching with the scroll of the Scriptures upon his lap.  He reminds the people listening of the events recounted in the Gospel, about how the Centurion came to the Lord asking Him with humble confidence to pray for his servant who was gravely ill.

Just say the word, then, and my servant will be healed, for to receive you into my house is an honor I do not deserve.”  He trembled at the thought of bringing Christ within his four walls, yet Christ was already in his heart.  The Centurion’s heart was already Christ’s throne, for he who was seeking out the humble had already taken his seat there.

Augustine knows that his flock cannot merely remain on the surface of the mysteries, whether the sacramental mysteries celebrated in the Eucharist or the sacramenta verborum in Scripture.  The sacramenta while distinct are nevertheless in unity.  We cannot merely remain on the surface of these mysteries but must let them enter into us so that we can enter more deeply into them.  Augustine’s imagery is that of Scripture as food, as nourishment which we must chew over and mull and consider and think about and reflect on.  That food in turn becomes what we are.  However, with the mysteries of Scripture and the Eucharist we encounter a food which changes us into what They are.

First, Christ is the true Actor in the sacred action of Mass.
Second, we able enabled to participate in the mysteries because of our baptismal character.
Third, as participants in Christ’s Priesthood (albeit in different qualities), we can raise our sacrifices (in our different ways) to the Father.
So, Christ is acting in us when we act at Mass.  We are “in action” first and foremost through reception of what Christ gives, and then also, in what we offer.

When it comes to the words, the texts of Mass, we all have our time to speak.  Using the Augustinian paradigm of Scripture I spoke of above, maybe we can see our roles more clearly.

There are times when the priest alone speaks.  He is not speaking to the congregation.  He is speaking to the Father.  The priest, who is alter Christus … another Christ, participates in the priesthood of the High Priest not only by baptism but by sacred ordination.  When the priest speaks, Christ speaks in Him as the Head of the Body.

There are times when the priest and people pray together.  Christus Totus prays.

By this I do imply that there are not other ways to see this.  Using the Augustinian paradigm for Scripture can open up for us other ways of seeing what our responses at Mass can mean for us.  The responses are important, not just as MY PERSONAL responses.  Mass is not about “me and Jesus”, or even about “this congregation”.  The actions of Mass transcend localities and even times.

When Christ comes to us, ready and willing to be received by us, we should tremble in confident humility.