Another testimony about how Pius XII and the Vatican saved Jews

The blog of Andrea Tornielli points us to an article in Il Giornale.

This is a must read, in my translation:

Pius XII entlisted a Jew to save him from the Nazis

"I’m not a believer, I don’t go to church, but if I found myself before Pius XII I’d get down on my knees, because if my children and I are in existence, we owe it to him."

Silvio Ascoli, Roman, class of 1945, was emotional as recounted the story of his father Bruno, "of the Jewish race" according to the norms of the infamous racial laws, whom the Vatican saved from deportation by enrolling him in its Guard.

Now a new witness testifies to the help.

"My father was born in 1910, my granfather’s family belonged to the Jewish community in Ancona, and his sister with her husband were to be deported to Auschwitz."  Bruno, who died in 1970, was the son of a mixed marriage and didn’t frequent the Roman Jewish community.  On 28 October 1938, just after the racial laws went into force, the man asked to be baptized.

But it was too late to escape the jaws of the regime which were closing around the Jews.  The parish priest tried to help him, writing that Ascoli had attended catechism since August of that year, but it didn’t make any difference.

"My folks tried to approach the Ministry of the Interior, attesting that they weren’t enrolled in the Jewish community.  But the response was that whoever had a Jewish parent, and couldn’t prove he belonged to another religion at the time when the racial laws went into effect, was considered to be a Jew.  My father was baptized to late.  for my family this was a terrible blow."

Thus the Ascoli were forced to declare at the Governor of Rome’s offices their membership of the "Jewish race".  Two years later, in 1940, Bruno married in church, a Catholic, Maria Bianchi, even though the marriage could not have civil effect.  "My mother married him knowind that things could go bad."  The couple found a place in the via Famagosta in the Trionfale quarter.

In October 1943, after the arrival of the Germans in the capital, Bruno Ascoli became a wanted by the police. "One day the fascists and nazis showed up at the house and asked for my father.  Luckily, he was out.  My family managed to let him know not to come back."  Bruno escaped and briefly found a place in the loft of the repair shop of a tire dealer. "He stayed there for two week, and my mother went secretly to take him something to eat.  But at the end of October, the tire dealer made him leave because it had become too dangerous to keep him there.  That is when, thanks to the concern of an uncle who worked in the Vatican Museum as an usher, my father came to be enlisted in the Palatine Guard."  Bruno Ascoli became an auxiliary of the Pope’s honor guard, and could live at the Vatican.

"He saved his skin!  He stayed there for a few months. There are photos which show him in the Palatine Guard uniform within the walls of the Vatican.  In December 1943 he got precious safe-conduct papers from the Holy See attesting to his membership in the Pope’s honor guard."  Silvio, the son, explained that he was in a kind of rotation, in the attempt to save as many persecuted people as possible.

"In the first months of 1944, the Holy See told my father about another hideout, in the Via Mocenigo, near the Vatican walls, close to a wood warehouse.  This proves there was an organized network of aid and assistance.  I also told this to my children: if the Vatican had not helped my father, I would not be here.  I believe that Pope Pacelli chose well: no public denunciations which would have provoked acts of repression – I don’t dare imagine what would have happened had the SS entered the Vatican – but rather give concrete help to the persecuted."

Some people incessantly tell terrible lies about Pius XII.  Mendacious books are given attention in paper’s like the New York Times, while the other side of the issue is virtually silenced.

Therefore, I will recommend a couple good books about Pius XII and what he did to save Jews.  These could also be good gifts. It is important to get this information into circulation.

First, try The Myth of Hitler’s Pope: Pope Pius XII and His Secret War Against Nazi Germany  by David G. Dalin.  The author is a rabbi. 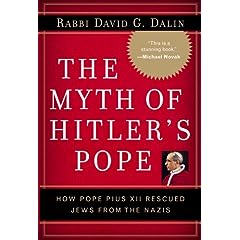 Also, there are the excellent books by Ron Rychlak Hilter, the War, and the Pope.  Rychlak is professor in a law school (Ole’ Miss?) and teaches how to handle evidence.

Also by Rychlak with Michael Novak is Righteous Gentiles: How Pius XII And the Catholic Church Saved Half a Million Jews from the Nazis

Speaking of evidence, there is also Pius XII and the Second World War: According to the Archives of the Vatican by Pierre Blet,

Others could be added (and maybe I will add them), but give these a shot.  They are fascinating reading.