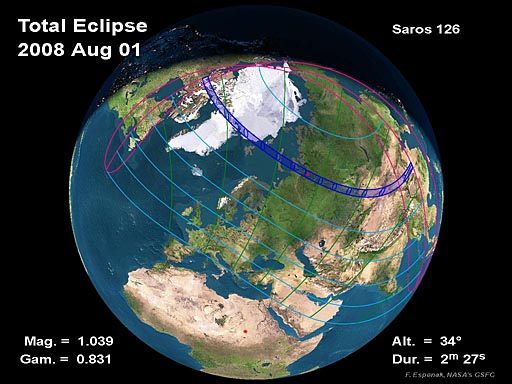 Sorry I missed this for you yesterday, but there was a total ecplise of the sun, which was visible in China.

A film crew made a really interesting live documentary of the event.  There were a few dramatic moments, as when a wicked cloud threatened at the moment of totality!

Also, toward the very end, as they are ending the documentary and before they cut to some Chinese classic/pop fusion, you can hear someone’s boom box blaring O sole mio.

Those Italians… they’re everywhere!  As a friend of mine, the legendary Fabrizio says "Semo come prezzemolo!"

I have seen a total solar eclipse, years ago, in Canada, on an absolutely flat plain, during a deadly cold winter with a crystal clear sky.

A friend and I drive way up to see it, and we were utterly alone and so did not have the experience of other people also watching what was going on.

Watching this documentary gave me shivers, for the memories… for more than one reason.

I recall with great clarity the way the light dropped in stages, and during totality there was a bright spectrum-like sunset 360 degrees.   The corona was large and spiked.

At the documentary webpage, you can see the whole show or the telescope only show.

It will be visible in China in some pretty interesting places.

We may have to organize a trip!  Anyone want a TLM (very discreet) pilgrimage trip to China to see O.L. of Shenshan in Shanghai and a total solar eclipse in, say, Suzhou, or Chengdu?

The sun and the moon stood still in their habitation, in the light of thy arrows, they shall go in the brightness of thy glittering spear. (Habbukuk 3:11)