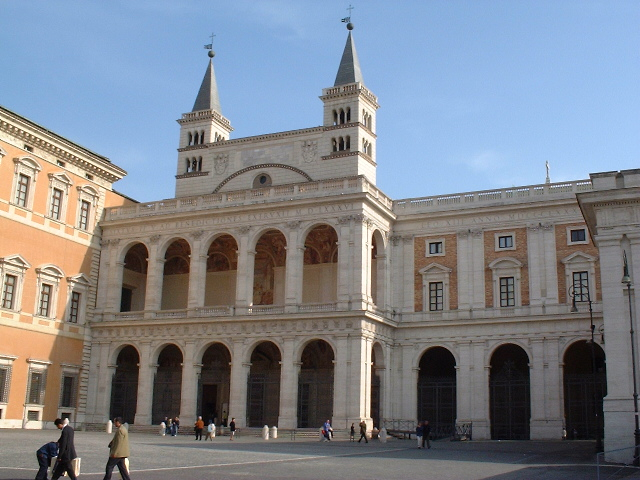 Today is the titular feast of the Basilica of St. John Lateran, the Cathedral of Rome.

"But Father! But Father", I can hear you objecting. "Don’t you know that that basilica is called ‘St. John‘? How can the Transfiguration of the Lord be the titular feast?"

While today is the main day for the basilica, they do make much over the two saints John as well. I do too. For my "onomastico", as the Italians call it, or "name day" I claim both the Baptist and the evangelist. That way I get two days in the summer (don’t forget the feast of the Beheading of St. John the Baptist) and one in the winter.

The Bishop of Rome as Patriarch of the West had the Lateran Basilica obviously. And he still does, even though the Pope seems to have dropped the title of Patriarch of the West (remember that?). Interesting move that. It demonstrates how Pope Benedict is the Pope of Christian Unity.   Without changing anything of the substance of the office of the Bishop of Rome, Successor of the Prince of the Apostles, he is willing to set aside things that are non-essential for the sake of greater mutual good will.

Scripture tells us that a week or so after Jesus and the disciples were at Caesarea Philippi (where Christ gave Peter the "keys") Jesus took Peter, James and John to a high mountain. They were surrounded by a bright cloud, like that in which God spoke to Moses. Christ shone with light so dazzling it was hard to see. On either side of Him were Moses the Lawgiver and Elijah the Prophet. A voice was heard, as at the time of Jesus’ Baptism: "This is my beloved Son, with whom I am well pleased; listen to him". The Gospels of Matthew and Mark use the Greek word metemorphothe for what happened. St. Jerome in his Vulgate chose transfiguratus est. The Synoptic Gospels (Matthew, Mark and Luke) expand the event saying "his face did shine as the sun: and his garments became white as snow," or "as light," according to the Greek text. This brightness has been taken to be a glimpse of Christ’s divinity shining through His flesh. Christ allowed the three key Apostles to see this so as to strengthen them before His Passion soon to follow.

LITERAL VERSION:
O God, who in the glorious Transfiguration
of your Only-begotten Son
strengthened the sacrament of faith by the witness of the fathers (Moses and Elijah),
and in a marvelous way foreshadowed the perfect adoption of children,
grant to your servants that,
hearing the voice of Your beloved Son himself,
we may merit to be made the same Son’s coheirs.

You might also be interested to look at the entry for the 4th Luminous Mystery: Transfiguration in the Patristic Rosary Project.

Fr. Z is the guy who runs this blog. o{]:¬)
View all posts by Fr. John Zuhlsdorf →
This entry was posted in SESSIUNCULA, WDTPRS and tagged Transfiguration. Bookmark the permalink.