Suggestions for your donations to good Catholic causes 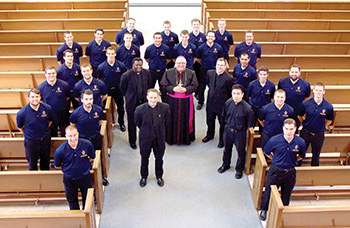 More and more often these days, I have notes from people who wonder about reliable Catholic charities or causes to which they can contribute their hard won money.  They ask for suggestions.

I have some suggestions right now!

Even though two of the following are local to where I am, you can be secure in the knowledge that what you give is going to the best of causes.

Consider the Priests for our Future campaign.  Here in Madison, the Extraordinary Ordinary, Most Rev. Robert C. Morlino, has through hard work and good example, along with great vocation directors over the years, increased the number of seminarians from, I think, fewer than 10 when he arrived, to, I think, 34 right now.  The major seminarians are St. Paul, Detroit, Mt. St. Mary, and there are 8 men in Rome.   Surprisingly, Rome is less expensive than many seminaries.  The huge increase in seminarians means that we have by far outstripped the foundations and funds set up in the past.  They didn’t imagine in the past this number of men in the program.  And so, hard choices are being made.  The cathedral church of Madison burned down some years ago.  It was decided to postpone any rebuilding for the sake paying the bills for seminarians.  Over the last couple years, projects have been on the boards even to close or lease out even the chancery building, a former highschool seminary, in order to pay for seminarians.  This program needs help.  If you are looking for a way to help a good cause, under the guidance of a great bishop, think about this.

You may recall that two years ago Bishop Morlino told all of the seminarians of the diocese, during the annual get together in August – they spend a week and half with the bishop – that he wants them all to know how to say the Extraordinary Form.  This year, during the summer get together, half of the Masses were in the Extraordinary Form and I gave a talk on the topic.  There was also a panel discussion including His Excellency the bishop.

Here is video about the seminarian project in Madison.  I am disappointed that the Extraordinary Form was not included in the video imagery, but it is a solid presentation.

Also, here in Madison, I am leading a group which is dedicated to supporting the expansion of the Extraordinary Form, the “Tridentine Mass Society of Madison“.  The group has a 501(c)(3)  status and so your donations are tax deductible.   We are starting to pick up some speed now.  One of our projects is to organize Pontifical Masses.  Bp. Morlino has been super supportive.  As a matter of fact we will have a Pontifical Requiem at the Throne here on Monday 3 November.  We ordered a full pontifical set of black vestments, as well as catafalque candlestands and a matching altar candle set.  We will also have to obtain soon a really nice Pontifical set in white.  Upcoming dates for other Pontifical Masses at the Throne are, so far, 8 December (Immaculate Conception) and 2 February (Candlemass), and 25 March (Annunciation).  We should be able to have more Solemn Masses as well, as more priests get more familiar with the rites.   So, we need money.  You can find the page of the TMSM HERE  The donation button looks sort of like my own! (Hint.)

Then, on a national scale, don’t forget about the Archdiocese for Military Services.  They provide chaplains.  I don’t need to explain that.  See my link on the sidebar, toward the bottom or, right now, click HERE

Finally, don’t forget my donation button!  I don’t have a 501(c)(3).  But… hey!… you keep the lights on!  Also, in January I would like to attend the meeting of the Confraternity of Catholic Clergy in Rome.  This isn’t one of those trips where I am going as a chaplain to a group, so its on me.  I could use the help.  Click the waving Vatican flag.  That donation will be earmarked for my Rome travel.  As you know, I keep a list of the names of everyone who sends a donation and I periodically say Mass for my benefactors.  It is my duty and pleasure to remember benefactors at the altar.

Fr. Z is the guy who runs this blog. o{]:¬)
View all posts by Fr. John Zuhlsdorf →
This entry was posted in ACTION ITEM!, Seminarians and Seminaries, The future and our choices and tagged Archd. Military Services, Bp. Morlino, D. Madison, donations, seminarians. Bookmark the permalink.