More on the notion of Deaconettes: the last stitch? 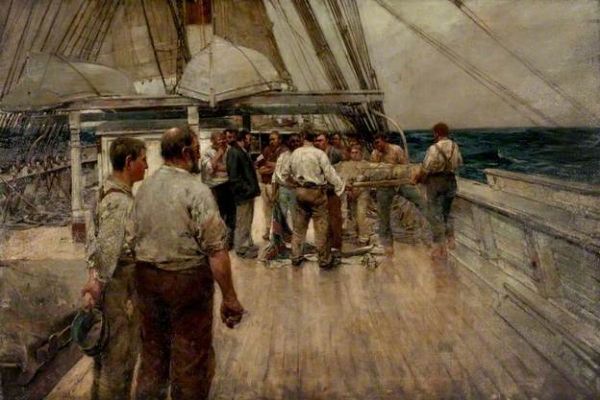 When I am being optimistic, I like to think that His Holiness initiated this deaconess thing so that he can definitively sew the hammock shut navy style with a pair of cannon balls, put the last stitch through its nose (just to be sure), and sent it down to Davy Jones.

From Catholic World Report comes a hard-hitting editorial.  Again, this is an opinion piece.

Here are some excerpts.  Mind you, the original is salted through with quotes, so read the whole thing there, after getting the gist here:

Editorial: Pope Francis and the Matter of Female Deacons

Does Pope Francis have any idea of the needless can of worms he opened up with his statement earlier today, made to a gathering of superiors general of women religious communities, that the issue of female deacons should be revisited and possibly studied by a “commission”?

At length. In 2002, the International Theological Commission concluded a five-year study of the question of women deacons, initiated at the request of the Congregation for the Doctrine of the Faith.

[T]he 42,679 word document concludes that 1) deaconesses in the early Church were not participating in some form of holy orders, 2) nor were they even equivalent to deacons. But, of course, many of those pushing for deaconesses today are doing so for the sole purpose of having leverage for the ordination of women to the priesthood.

The “Francis effect”, apparently, means that anything and everything prior to 2013 is up for grabs. Why worry about an exhaustive five-year study from 14 years ago when we can another commission! After all, as Francis likes to remind us, the Holy Spirit is full of surprises, which apparently means the Holy Spirit is also not too concerned about what has gone before, or the reasons for it.

Which brings me back to the Holy Father. Why did he say what he did? If he truly is oblivious to the 2002 ITL study and all that has already gone into this topic, then one has to wonder about how prepared and studied he actually is.

Francis’ comment about having discussed this matters years ago with a professor is perhaps more revealing than it initially appears. I also had conversations with professors about these and related matters; I also, despite not being a professional theologian or a priest/bishop, am well aware of what the ITC has studied over the years, not to mention what the CDF has stated about a whole host of questions in recent decades. Why must we continually revisit matters that have been addressed in detail and are, in many ways, already set to rest in terms of magisterial teaching? Why not recognize that even if the Church revived a female diaconate today, it would cause far more confusion and dissent than it would anything else? Rather than invest more time and effort into such matters, why not zero in on the real and substantial challenges faced by the Church in 2016?

Yes, the Holy Spirit is full of surprises, but being surprised is not the same thing as being confused.

Burial at sea… that’s what we need.

Preparations Prior to the Burial

The Ship: The sails should be adjusted so she is cocked up to the weather, some sails full of drive and some laid all a’back, so the ship is motionless.

Topgallant Yards a-cock-bill to signify a death and a burial. Lift lines out of trim to speak grief. The entry port on the starboard gangway to windward, and open.

The Body: canvas shrouded, with two cannon balls at the feet for weight, to insure sinking. The canvas should be sewn in place, starting at the feet, with the last stitch through the nose of the corpse, to check the person is indeed deceased. The body is then placed on an 8 man mess table, and covered with a Red Ensign.

Crew Formation: Crew gathered to witness the service, under immediate command of the Bosun. Position of the crew not specified due to various different ships’ deck configurations.

Forms of Prayer to be Used at Sea
From the Anglican Book of Common Prayer, 1662

The Order for the Burial of the Dead

Here is to be noted, that the Office ensuing is not to be used for any that die unbaptized, or excommunicated, or have laid violent hands upon themselves.

The Priest and Clerks meeting the Corpse […] and going before it […] shall say, or sing,

I AM the resurrection and the life, saith the Lord: he that believeth in me, though he were dead, yet shall he live: and whosoever liveth and believeth in me shall never die. St. John xi. 25, 26.

KNOW that my Redeemer liveth, and that he shalt stand at the latter day upon the earth. And though after my skin worms destroy this body, yet in my flesh shall I see God: whom I shall see for myself, and mine eyes shall behold, and not another. Job xix. 25, 26, 27.

HE brought nothing into this world, and it is certain we can carry nothing out. The Lord gave, and the Lord hath taken away; blessed be the Name of the Lord. 1 Tim. vi. 7. Job I. 21.

As the deceased and the burial party approach the entryway the Bosun orders: “Ship’s Company… Off hats.”

After they are come to the entry port, shall be read one or both of these Psalms following. Dixi, custodiam. Psalm 39.

Which it’s a burial at sea.