A reader sent me this article from The Boston Globe, sad city of parish closings.  My emphases and comments. 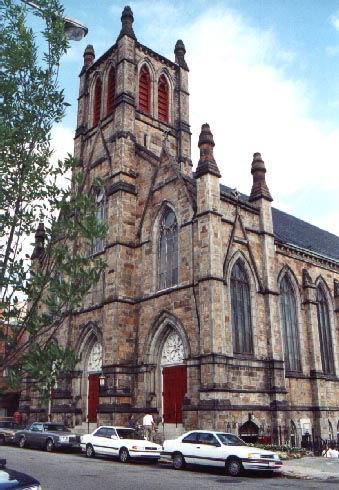 Losing a Space to Soar

It’s not what you expect to see when you step into a Catholic church these days.

Demurely dressed women in lace mantillas. A priest with his back to the congregation [Well… not really.. but okay.]: In nomini Patris, et Filii, et Spiritus Sancti, Amen.

Bells ringing. Gregorian chant floating down from the choir loft.  [Sounds good to me.]

But here it all is at Holy Trinity German Church, on Shawmut Avenue in the South End, at the start of a sweltering Sunday.

About 100 people from Bourne and West Roxbury and all over come for the 9 a.m. Latin Mass. They are men and women of all ages, Catholics convinced that their church made a big mistake when it did away with the Latin Mass.  [WDTPRSers do not favor the term "the Latin Mass", but let’s move along.]

"I don’t get anything out of the [English] Mass," says Kathleen Stone, 59, of Hull. "There is a lack of reverence. This is my time alone with God."  [I should hope she could at least get the Sacred Body and Blood of Our Lord Jesus Christ out of "English Mass".  Still, the way some Masses are celebrated, we can forgive the momentary lack of perspective.  Also, the issue isn’t language.  We don’t like "the English Mass" any more than "the Latin Mass" as a useful term.]

This grand church is the perfect setting for a Latin Mass. [As so many of them were.  Immigrants scrimped and saved, sacrificed deeply to build these beautiful churches, later treated with so little respect for the people who built them.]

Incongruous in one of the few unprettified parts of the South End, its puddingstone and granite exterior is impressive enough.

But walking through Holy Trinity’s doors will take your breath away.  ["But Father! But Father!", someone might be wondering, "Don’t you prefer one of these nice new modern churches?  You know… the one’s that look like a bowling alley or a parking ramp?"]

Parishioners say it was mostly working people who scraped together the money to turn the church, which opened in 1877 to serve thousands of German immigrants, into a place resembling the ornate cathedrals they left behind, by cramming it with paintings and statues.

But Stone and the others have just three Sundays left at Holy Trinity.

The Archdiocese of Boston is closing the church June 30, partly because its congregation is too small to sustain it, officials say.

Parishioners at Holy Trinity, like those in many of the churches that have been closed, are mighty angry. They are probably going to appeal the archdiocese’s decision. But the church closing isn’t the end of the Latin Mass in these parts. In fact, the Latin Mass is having a resurgence.

The parish of Mary Immaculate of Lourdes in Newton offers Latin Masses now, and that is where some of Holy Trinity’s worshipers have already gone, reluctantly.

Last year, Pope Benedict XV loosened the rules, allowing any church with enough support to offer Masses in Latin. [Actually, the provisions of Summorum Pontificum go far beyond that.]  Four other local churches now have them, too, so the Latin Mass will survive this closing.

Less certain is the future of that lovely church itself, designed and built to outlast all of the transformations within it.

The Archdiocese has closed about 60 parishes since it began its consolidation four years ago. A few churches have been sold to other denominations. Some have been turned into housing, including condominiums. In the happiest cases, their windows have been pulled out and sent to other parishes, their statues and pulpits and stations of the cross scattered across the country. It’s too soon to know what will happen here.

Susan Long saw her old church, the parish of Saints Peter and Paul on Broadway in South Boston, turned into condos, and she can’t bear the thought of the same thing happening at Holy Trinity, where she says the Latin Mass gave her a spiritual reawakening.

"I was baptized there," she says. "Now there are people sitting at a holy place smoking cigarettes."  [Does this not say it all?]

We have paid a lot of attention to the communities like this one, broken apart by church closings, and rightly so.

But sitting in Holy Trinity for an hour, imagining this beautiful place sectioned off for granite countertops and walk-in closets, you realize there are other casualties in this whole painful process.

Like so many other churches representing the highest aspirations of long-gone Catholics, this grand, transcendent place may ultimately not transcend at all.

Yvonne Abraham is a Globe columnist. She can be reached at abraham@globe.com