One the most damaging “reforms” implemented after the Council, founded on the excuse of poor scholarship, false archeologizing, and the “spirit of the Council”, is the so-called turned around altar for Mass “facing the people”, versus populum.

This certainly was the opinion of the great liturgical scholar Klaus Gamber.  Prominent scholar/figures of the Liturgical Movement Louis Bouyer and Josef Jungmann turned their own ideas about on this issue, as a matter of fact.   That’s something that did get out in the press at the time.

Pope Benedict has been putting into action his plan to reinvigorate the identity of Holy Church, especially through a renewal of the liturgy under a hermeneutic of reform and continuity.  Part of this “Marshall Plan” as I term it, has included the momumental step of Summorum Pontificum, as well as the concrete gestures of distributing Holy Communion on the tongue only to people who are kneeling.

He has also placed the Cross at the center of the altar for celebrations of Holy Mass.  He is surely doing this in order to promote a deeper understanding of the true orientation of our focus during Mass and, consequently, an actual restoration of Mass ad orientem.

Many priests are implementing what the Holy Father has been working for, and they are collaborating.

Thus, am always pleased when I receive news that yet another parish is being restored to ad orientem worship, priest and people facing the Lord, the Cross, on the same side of the altar of Sacrifice, together in unity.

Fr. Rob Johansen has informed me that at his parish of St. Stanislaus he implemented a project of restoring the main altar of the church.

He is going to be introducing celebrations of Holy Mass ad orientem soon.

Here is what he wrote on his site Thrown Back.

The altars have been completed, and they will be officially “unveiled” this weekend.

As part of putting our newly restored altars in their rightfully prominent place, I will celebrate the Masses this weekend and the following weekend (The Feast of the Exaltation of the Holy Cross) Ad Orientem. I have spent some time explaining and catechizing my parish about the use of ad orientem in the past few weeks. The re-introduction of this posture is something of a landmark here, as I’m pretty sure the high altar hasn’t been used for a public celebration of Mass in 30 years or more.

I’ll have photos up of the finished altars, as well as of our historic Ad Orientem liturgies, posted next week!

We look forward to them! 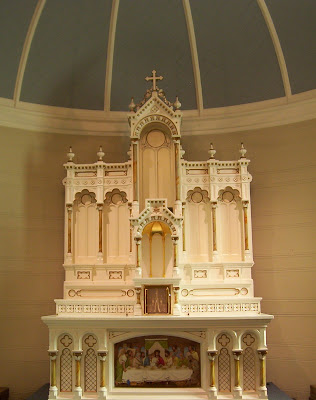