Archbp Burke: “They’re using the Eucharist as a political tool” 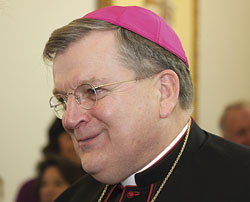 Vatican Official: Bishops Have no Choice But to Refuse Communion to Pro-Abort Politicians
By Hilary White

ROME, January 30, 2009 (LifeSiteNews.com) – Archbishop Raymond Burke, in an exclusive interview last week, told LifeSiteNews.com that the issue of pro-abortion politicians continuing to receive Holy Communion is still one of major concern and that it is the duty of bishops to ensure that they are refused.

He told LifeSiteNews.com, "I don’t understand the continual debate that goes on about it. There’s not a question that a Catholic who publicly, and after admonition, supports pro-abortion legislation is not to receive Holy Communion and is not to be given Holy Communion."

"The Church’s law is very clear," said Archbishop Burke, who was appointed last year by Pope Benedict XVI as the head of the Church’s highest court, the Apostolic Signatura. "The person who persists publicly in grave sin is to be denied Holy Communion, and it [Canon Law] doesn’t say that the bishop shall decide this. It’s an absolute."

Among the US bishops directly to address the issue, Archbishop Burke was one of around a dozen who vigorously supported a directive of the Vatican that said pro-abortion Catholic politicians "must be refused" Holy Communion if they attempt to receive at Mass. Others have refused to abide by the Vatican instruction and the Church’s own Code of Canon Law, saying they would rather focus on "education" of such politicians.

Archbishop Burke called "nonsense" the accusation, regularly made by some bishops, that refusing Holy Communion "makes the Communion rail a [political] battle ground". In fact, he said, the precise opposite is true. The politician who insists on being seen receiving Holy Communion, despite his opposition to the Church’s central teachings, is using that reception for political leverage.

In 2004, when self-proclaimed Catholic and candidate for the Democrat party, Sen. John Kerry, was frequently photographed receiving Holy Communion despite his vigorous support of abortion, the US Bishops Conference issued a document which said only that it is up to individual bishops whether to implement the Church’s code of Canon Law and refuse Communion. The issue has remained prominent with the appointment of Joe Biden, another pro-abortion Catholic politician, as Vice President of the United States of America.

Archbishop Burke recalled previous experiences with Kerry, pointing to the several occasions when the senator was pictured in Time magazine receiving Communion from Papal representatives at various public events. Burke said that it is clear that Kerry was using his reception of Holy Communion to send a message.

"He wants to not only receive Holy Communion from a bishop but from the papal representative. I think that’s what his point was. Get it in Time magazine, so people read it and say to themselves, ‘He must be in good standing’."

"What are they doing? They’re using the Eucharist as a political tool."

In refusing, far from politicising the Eucharist, the Church is returning the matter to its religious reality. The most important reasons to refuse, he said, are pastoral and religious in nature.

"The Holy Eucharist, the most sacred reality of our life in the Church, has to be protected against sacrilege. At the same time, individuals have to be protected for the sake of their own salvation from committing one of the gravest sins, namely to receive Holy Communion unworthily."

Archbishop Burke also dismissed the commonly proffered excuse that such politicians need more "education". [RIGHT!] Speaking from his own direct experience, he said that Catholic politicians who are informed by their pastors or bishops that their positions in support of pro-abortion legislation makes it impossible for them to receive Holy Communion, "I’ve always found that they don’t come forward."

Archbishop Burke said that the issue had been debated enough. He rejected the idea that the matter should be left to the US Conference of Catholic Bishops, saying the Conference has no authority in the matter. "This is a law of the universal Church and it should be applied."

"I think this argument too is being used by people who don’t want to confront the issue, this whole ‘wait ’til the Conference decides’…well the Conference has been discussing this since at least 2004. And nothing happens."

When asked what the solution was, he responded, "Individual bishops and priests simply have to do their duty. They have to confront politicians, Catholic politicians, who are sinning gravely and publicly in this regard. And that’s their duty.  [Thus, do not wait for direction from your local bishop?  Or bishops wait for the conference?]

"And if they carry it out, not only can they not be reproached for that, but they should be praised for confronting this situation."

Fr. Z is the guy who runs this blog. o{]:¬)
View all posts by Fr. John Zuhlsdorf →
This entry was posted in The future and our choices. Bookmark the permalink.