What is going on in Brazil with Masons and Catholics?

Rorate has this, but I want to bring it to the attention of as many people as possible… lest nothing be done about it.

Keep in mind that Catholics cannot be Masons.  Period.  Masonry and Christianity are not compatible.  As a matter of fact, they are antithetical.  The CDF has made it clear that Catholics cannot be Masons.  The 1983 CIC does not specifically mention Masons but says that membership in organizations that “plot against the Church”, is prohibited and can be punished with a censure:

That said, how to interpret this?

In the Diocese of Pesqueira (state of Pernambuco, Brazil), on 20 August 2012 Father Geraldo de Magela Silva, celebrated a “Day of the Freemason” Mass.  Photos were  posted on the Facebook page of a Masonic organization.  Rorate has a  few.  Here is one. 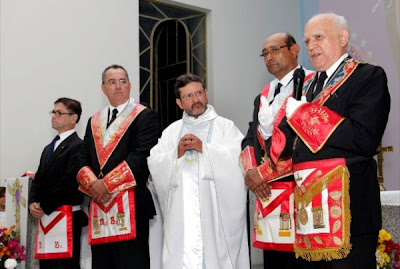 I am not 100% certain, but in the following photo it looks as if the priest is giving Communion to a man dressed in Masonic gear. 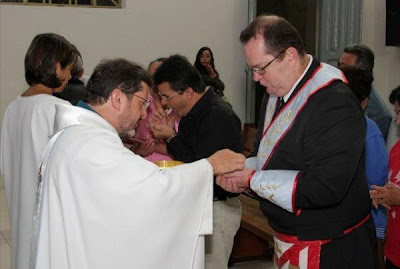 What is going on in Brazil?   Rorate, in another post, looked at what a Brazilian bishop did some time back. Luiz Demétrio Valentini, Bishop of the Diocese of Jales (Brazil) on 10 April went to a Masonic Lodge in Jales in honor of its 53rd anniversary. He was received with honor.  A photo: 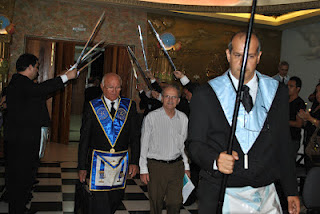 The bishop is, I believe, the one not dressed in Masonic gear, though the Masons are certainly dressed with greater class.

If you are a Catholic involved in some Masonic group… GET OUT NOW.