WDTPRS: Christ the King (2002MR): the elements will be dissolved with fire, the earth will be burned up We have come back to the last Sunday of the liturgical year.  In the post-Conciliar calendar of the Roman Church this is the Solemnity of Christ the King.  In the older calendar, this is celebrated (with a rather different meaning!) at the end of October.

Today’s Solemnity is an anticipation of the season of Advent, which  focuses on the different ways in which the Lord comes to us, especially in the Second Coming. 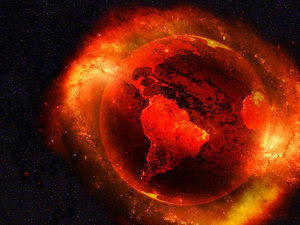 While this Collect is of new composition for the Novus Ordo, it is similar to what was in the 1962 Missale Romanum for this feast with variations in the second part: Omnipotens sempiterne Deus, qui dilecto Filio tuo universorum Rege, omnia instaurare voluisti: concede propitius; ut cunctae familiae gentium, peccati vulnere disgregatae, eius suavissimo subdantur imperio… “so that all the families of peoples, torn apart by the wound of sin, may be subject to His most gentle rule.”  That’s a different message by far.  Today’s Collect demonstrates the theological shift in many of the Latin prayers in the Novus Ordo.  But that is the stuff of other posts.

The phrase, “renew/reinstate all things in Christ” points to the Kingship of Jesus.  In everything that Jesus said or did in His earthly life, He was actively drawing all things and peoples to Himself.  In the time to come, when His Majesty the King returns in gloria and maiestas this act of drawing-to-Himself (cf. John 12:32) will culminate in the exaltation of all creation in a perfect unending paean of praise.  In the meantime, by virtue of baptism and our integration into Christus Venturus (Christ About-To-Come), we all share in His three-fold office of priest, prophet, and also king.  We have the duty to proclaim His Kingship by all that we say and do.  We are to offer all our good works back to Him for the sake of His glory and the expectation of His Coming.  This glorious restoration (instaurare) is possible only through the Lord’s Cross (Greek stauros).  The Cross is found subtly in the midst of this Collect, where it is revealed as the pivot point of all creation (creatura).

When we come into His presence, even in the contact we have with Him through the Church’s sacred mysteries, His divine attribute of splendor or glory or majesty, whatever you will, has the power to transform us.  His majestic glory changes us.  This MYSTERY changes us.  So, it is right to translate these lofty sounding attributions for God when we raise our voices in the Church’s official cult.

Fr. Z is the guy who runs this blog. o{]:¬)
View all posts by Fr. John Zuhlsdorf →
This entry was posted in Liturgy Science Theatre 3000, WDTPRS and tagged Christ the King, solemnity. Bookmark the permalink.

14 Responses to WDTPRS: Christ the King (2002MR): the elements will be dissolved with fire, the earth will be burned up