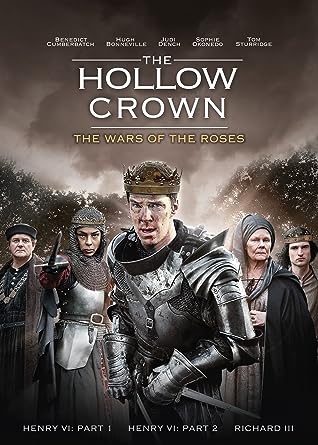 Last night I watched a segment of The Hollow Crown.  Series 1 (Richard II, Henry IV Part 1, Henry IV Part 2, Henry V) US HERE – Series 1 UK HERE – Series 2 (Henry VI Part 1, Henry VI Part 2, Richard III) US HERE – Series 2 UK HERE.  These are a mini-series which connect history plays of Shakespeare with actor continuity with the roles.  So, Tom Hiddleston is Hal/Prince Harry/Henry V all the way through, Benedict Cumberbatch is Richard of Glouschester/Richard III, etc.  The acting is great, the sets and filming are marvelous.  The language is Shakespeare.  What’s not to like?

In any event, last night I watched Henry VI Part I, during which Joan of Arc is burned at the stake.  Did you, dear reader, know that St. Joan of Arc is depicted in a play by William Shakespeare?   Well, she is.  In The Hollow Crown series, she got a fairly decent treatment.  She was rather wild-eyed, but, hey, why not.  I had a sense that she was being mistreated – the whole burning at the stake being part of that, of course.

Turning the page, The Great Roman Fabrizio reminded me and my Roman SMS group that today is the anniversary of Giordano Bruno’s own meeting with the stake in the Campo de’ Fiori.  Anti-Catholics and masons put up a gloomy, ugly huge statue of him, the base decorated with plaques of famous heretics and Church haters.

Giordano Bruno was a seriously weird cat and a heretic.  He would find himself welcomed and right at home at the Fishwrap (aka National Schismatic Reporter).

A few years ago, The History Blog had a longish piece about the heretic.  It included a screen shot of a smart phone app which would let you burn Giordano at the stake.  Here is a shot: So, it’s a little grisly.  Heresy is a serious matter, after all.

Don’t be a heretic!

On that note, please consider buying some well-roasted …

When your’re facing a hard day battling theological error and the miscreants who teach it, start out with a blazing hot Fr. Z swag mug of MYSTIC MONK Coffee!  It’s just what you need to get fired up to face that To Do List.  I like the dark roast.

The Wyoming Carmelites offer Mystic Monk TEA as well, if tea is your thing.  They also have lots of gear. And don’t be stingy with your MYSTIC MONK COFFEE!  Buy lots of it and give it as gifts.  Talk your office manager into getting MYSTIC MONK coffee (using my link, of course… always use my link) for everyone!

Fr. Z is the guy who runs this blog. o{]:¬)
View all posts by Fr. John Zuhlsdorf →
This entry was posted in Events, Lighter fare and tagged Giordano Bruno, William Shakespeare. Bookmark the permalink.