Over the last few days it feels like the news is coming in at firehose volume and force.

And, from the onset, I’ll just say now that the moderation queue is ON.

A lot of the firehose sensation has to do with fallout following the malicious anti-American, anti-conservative attack piece in the Vatican sponsored and reviewed Inciviltà cattolica by Jesuit Antonio “2+2=5″Spadaro, who is so focused on the life and works of Italian homosexual writer Pier Vittorio Tondelli that he created his own website about him (HERE), and Marcelo Figueroa, an Argentinian Presbyterian.

Of recent note is Rusty Reno’s scathing review of the Spadaro attack article.  Reno is editor of First Things, though this appears in the National Catholic Register.  Spadaro smeared the late Fr. Richard John Neuhaus, the founder of First Things, with the tarry brush of hate-filled integralist ecumenism.

Prof. Chad Pecknold, in a Tweet, made a wry observation about the Fishwrap’s Michael Sean Winters, the Wile E. Coyote of the catholic Left.  This gets convoluted, but Wile E. Winters rose from his fainting couch to issue a full-throated endorsement of “2+2=5” Spadaro with celebratory chicken dance.  Fr. Raymond de Souza wrote a critique of the Spadaro Attack.  In a spectacular 1830 word display of lefty logorrhea the Coyote barked back at Fr. de Souza.  Pecknold, reading Coyote v de Souza, opined: “Michael Sean Winters condemns @ewtn and the @NCRegister as [being] opposed to the pope. I mean, come on. Is this satire? https://t.co/JFc5Wcctdv”  Once upon a time, Fr. Neuhaus quipped that the Anglican Church existed to make irony redundant.  The Anglicans need to move over.

Fr. de Souza writes regularly for one of the journals, the National Catholic Register, that advances the conservative Catholic and evangelical alliance rooted in the politics of abortion and gay marriage among other items. I just went to their website yesterday and there are four articles hostile to the LGBT community on the homepage, three of them attacking Jesuit Fr. Jim Martin, for daring to suggest that Catholics should reach out to the LGBT community.

First, [Chaput] is wrong on the facts. Does the archbishop not recall Anita Bryant and her crusade against efforts to bar discrimination against gays? Does he not recall Proposition 6 in California, the 1978 ballot referendum that would have barred gay men and women from teaching, a form of bigotry so obvious that Ronald Reagan opposed it? Second, see how he immediately sees this, and seemingly every issue, as us versus them, the Christians versus the lions.

One this is clear from this ongoing skirmish. 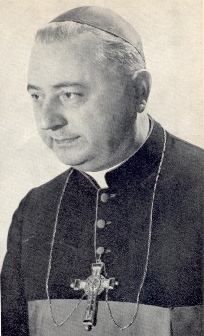 Spadaro et al., in a few strategic slashes, have done more to promote division and animosity in the Church than anyone else I can think of over the years since… since…  Annibale Bugnini?

Meanwhile, yesterday I posted about a glaring, and telling, strategic omission by Spadaro: he didn’t accuse Ronald Reagan of the “Manichaenism” which he leveled at George Bush and President Trump.  HERE

In a similar vein, Fr. Martin Fox, at his blog Bonfire of the Vanities, notes another omission: the Knights of Columbus.  Fr. Fox observes that the former editor of the ultra-liberal The Tablet, Austen Ivereigh compared the KC’s to ISIS.  Yes… really.

“Frankly, it’s a narrative that’s very close to that of ISIS.”

Get that? When you and I seek to oppose the secular push to remake society, to impose a new vision of human nature (which is what the redefinition of marriage and “gender theory” is all about), we are “very close to…ISIS” — ISIS being those folks who throw gay people off the tops of buildings and give 30 lashes to schoolboys for playing soccer and sell girls into slavery.

Fr. Fox also observes that Spadaro doesn’t openly attack the KofC’s because the KofC’s pay a lot of the Vatican’s bills.

Spadaro, et al., aren’t really interested in truth.  They have an agenda.

We know for whom Soros is carrying water.

For whom are Spadaro, et al., really working?