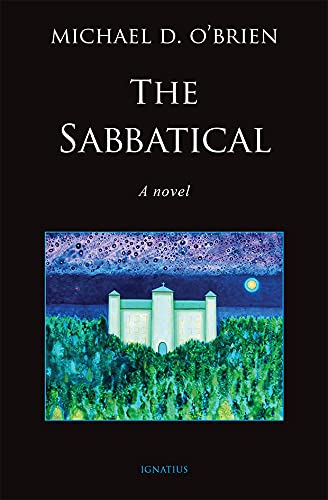 I have just received a Kindle edition of the mystical Catholic writer Michael D. O’Brien’s new novel, The Sabbatical.  US HERE – UK HERE

This is a sequel to The Father’s Tale.

I am excited to get to this soon.

The Father’s Tale – US HERE – UK HERE – was the story of a man who leaves his normal, comfortable life to go in search of his son who has fallen into a cult.   It is a
“prodigal son” story with twists and tendrils into Eliot and Hopkins and Russian writers.  That’s a massive reduction for such a massive work, over 1000 pages.    While I have often thought that O’Brien could have listened to his editor a little more often, each page turn remains oddly compelling.  Surely this is because O’Brien writes from depth and a rooting in a strong prayer life.  Look at his artwork sometime.  HERE

The Sabbatical is about one third the length of The Father’s Tale.

Sticking with O’Brien, some of you are in for a treat.  You get to discover his books.

I recommend the following.

and then the series that hooks back into Father Elijah beginning with:

Outside that series is his extremely successful venture into SciFi:

I believe his most recently released work was, brief and charming.

I really liked that one.

In effect, you can choose where to dive in.

Fr. Z is the guy who runs this blog. o{]:¬)
View all posts by Fr. John Zuhlsdorf →
This entry was posted in The Campus Telephone Pole and tagged Michael D. O'Brien. Bookmark the permalink.