WDTPRS – 24th and Last Sunday after Pentecost: Like lightning in the East This is the Last Sunday of the liturgical year.

The last part of the liturgical year thematically dovetails with the first part of the new liturgical year.  Advent was once longer, so the overlap of reflection on the End Times across this whole period goes way back into our long history as a pilgrim people, soldiering on toward our meeting with the Lord.

In the traditional Roman calendar, we use the texts from the 24th Sunday, which is always the Last Sunday of the liturgical year … even when it isn’t.

It is a little odd that the last Sunday of the year doesn’t have a special formulary.  Again, this is probably because Advent was once longer than it is now, and this time of the year dovetails with Advent.

We also call today “Stir Up” Sunday, because of the first words of the Collect.  This is the day when families in England would stir up the ingredients for the Christmas Pudding, so that it could season a while against the day of its own coming.

This is an ancient prayer, occurring in the Liber sacramentorum Augustodunensis, a 9th century manuscript variation of the Gelasian Sacramentary. This prayer survived in the tender ministrations of Bugnini’s Consilium as the Collect for the 34th Week of Ordinary Time, in the Novus Ordo, used during the week after the Sunday celebration of the Solemnity of Christ the King.  Thus, it stays in the same place in the liturgical year that it occupied before the changes.

Our rousing Lewis & Short Dictionary says excito means “to raise up, comfort; to arouse, awaken, excite, incite, stimulate, enliven”.   Propensius is a comparative adverb of propendeo, which thus means “more willingly, readily, with inclination”.  As we have seen many times before, pietas when attributed to God is less “piety, duty” than it is “mercy”.  Exsequor is “to follow to the end, to pursue, follow; to execute, accomplish, fulfill”.  Percipio is “to get, obtain, and receive”.

The two comparatives, propensius and maiora, set up a proportional relation between the grace-filled pursuit, on our part, and the extent of the effects of the remedy.  The greater our earnestness, which is itself prompted by God’s work in us, the more will we receive His mercy.

Rouse up, we beseech You, O Lord, the wills of Your faithful, that they, pursuing more earnestly the fruit of the divine work, may obtain the more greatly the remedies of Your mercy.

Stir up the will of your faithful, we pray, O Lord, that, seeking more eagerly the fruit of your divine work, they may find in greater measure the healing effects of your mercy.

Lord,
increase our eagerness to do your will
and help us to know the saving power of your love.

Noooo… I didn’t make that up or get the wrong day.  That’s really what we heard all those years. No wonder Catholic identity is in such a mess.  It’s as if they wanted to make everyone as stupid as possible.

Stir up the will of your faithful, we pray, O Lord, that, striving more eagerly to bring your divine work to fruitful completion, they may receive in greater measure the healing remedies your kindness bestows.

You can see from this the difference between a formal equivalence approach and a dynamic equivalence.   Which do you prefer?  I hear that some in high places want to go back to “dynamic equivalence”.  In effect, Liturgiam authenticam is dead in most countries.

Keep in mind that this is for the last Sunday of the liturgical year.

This is a threshold for crossing into a new Advent.

Advent is more than a preparation for the coming of the Christ Child at Bethlehem.

Advent really points to the Second Coming of the Lord at the end of the world, when all will be laid bare and the cosmos will be unmade in fire.

In the Epistle for this Mass Paul tells the Colossians to persevere in every fruitful good work (in omni opera bono fructificantes).

In the Gospel from Matthew 24, Jesus describes the “abomination of desolation” from Daniel and the antichrists and the end times, the hour of which we do not know.  This is the pericope in which Christ says He will appear like lightening in the East. The Lord talks about the “signs of the times” in Matthew 24.  He includes this in v. 15: “When therefore you shall see the abomination of desolation, which was spoken of by Daniel the prophet, standing in the holy place: he that readeth let him understand.”  In Daniel 9:27, 11:31, 12:11 we read of  ha-shikkuts meshomem, one who makes desolate and a desolator and an abomination that makes desolate.   Some thought that this referred to the desecration of the Temple by Antiochus, or the coming of the Romans, or the building of the Mosque.   It seems they were wrong.   Each generation has a feeling that they were in the “end times”.  Indeed, the End Times began when the Lord Ascended.  However, signs of our times suggest an acceleration toward things abominable, abominations that do cause desolation.  Motus in finem velocior.

Do I have to mention pagan rites in the Vatican gardens and the placing of a demon idol worship bowl on the very altar of St. Peter’s?  The highest point of worship over the grave of the Apostle Peter?  What that damn thing was, it wasn’t and isn’t good.

Let’s not dismiss the fact that the one who ordered that demonic idol bowl to be placed on the altar was the one who issued Traditionis custodes.   He sat in the Vatican Gardens and watched people worship a pagan idol.  He stood at watched an Imam recite a passage from the Koran which claims the Vatican for Allah.

Other than that… not a big deal.

The Secret asks God to free us from earthly desires (cupiditates) and the Postcommunion asks for healing of whatever is directed to vices (medicatio).  This is a fitting theme for the end of the year and the threshold of the new.

Making connections within the texts for Mass helps me drill into a possible source for this prayer’s imagery. 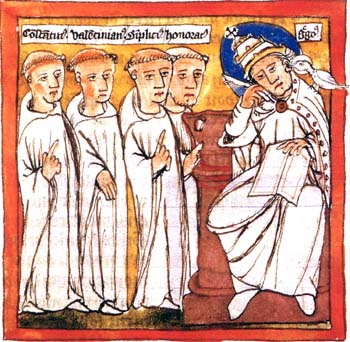 There is a sermon of Pope St. Gregory I “the Great” (+604) on Matthew 20:1-16 about the man who hires day-laborers at different hours of the day.  Gregory uses an allegorical key to interpret the different hours the man came to hire workers as being the ages of a man’s life.  The parable of the Lord is also eschatological. It describes the reward the Lord gives for doing His work, regardless of the moment of the calling in history.  The work to be done is more than likely harvest work, bringing in the fruits of the growing season.

This parable applies to the late-coming Gentiles as well as the early-coming Jews, just as it is meant for individuals who experience conversion even late in life.

In the parable Jesus has a man identify those sitting idle without work: they will obviously receive no good wage at the end of the day.  Without work, they will be poor, in straights.  In the sermon there is a phrase which is echoed in the Collect:

“For whoever lives for himself and is sated by his own pleasures of the flesh, is rightly called ‘idle’ (otiosus), because he is not pursuing the fruit of the divine work (quia fructum diuini operis non sectatur).” (Hom. XL in Evangelia, I, 19, 2)

The verb sector is “to follow continually or eagerly”. In the Collect the priest prays that we will with God’s help be the opposite of “idle”, namely, that we will be not merely earnest or intent, but even more eager (propensius).   The references to “fruits” and “work” in the Mass texts and the parallel of concepts in the sermon with those of the Collect, suggest to me a connection. We know that many of our ancient Latin prayers were authored at the time of Pope Gregory and before.

We are in need of healing and actual graces.

Baptism gives us an initial healing and justification, but wounds of Original Sin remain in our body, mind and will.

God gives us grace to move and strengthens us to do His will, which has healing and saving consequences.

To the extent that God gives us grace and to the extent we cooperate with His guidance and helps, the greater will be our present healing and consolation and our reward when the Lord comes like lightening from the East.

Beg His help.  Beg His mercy.  Praise Him for His gifts.

Fr. Z is the guy who runs this blog. o{]:¬)
View all posts by Fr. John Zuhlsdorf →
This entry was posted in Four Last Things, Liturgy Science Theatre 3000 and tagged Four Last Things. Bookmark the permalink.