In The Light of the Message: a response (positive) to Dr. Peters

Over at the excellent blog In The Light Of The Law, Dr. Peter’s made the following observation:

Of those matters we know anything about (an important qualification when discussing papal activities), Benedict XVI’s letter to the Congregation for the Causes of Saints seems to me to be one of the most important things he’s done to date. It certainly shows the clearest difference between him and John Paul II to emerge so far. Benedict XVI could have communicated his concerns about the beatification and canonization process in a simple telephone call; instead he wrote a short treatise on the topic. The world was meant to take notice.

I cannot in the least quibble with the fact that when a Pope addresses a plenary of a curial dicastery, he is giving direction and often makes course corrections.  All you need to do is review the late John Paul II’s addresses to the Rota and Signatura to see that.  I also agree that the world was meant to take notice.  Why else would it be published (as they always are)?

His Holiness Pope Benedict hasn’t given something new to the Congregation, as far as their regular work and procedure is concerned.  There is nothing new, for example, in what the Pope said about martyrdom.  I had the privilege of completing the full course, or Studium, given by the Congregation for Causes of Saints.  The Studium trains and certifies postulators for causes for beatification and canonization in both the diocesan and Roman phases as well as other collaborators of the Holy See. The things mentioned by Dr. Peter’s, while very important for a wider audience, were nothing new to the Congregation and its collaborators.  The instructors of the Studium made these very same points, emphatically.

Still, Dr. Peter’s has done a service in making this address known to a wider audience.  Take a few minutes and read it yourselves, if you can.  I think little by little we are seeing Pope Benedict reveal more and more of the way he is taking his pontificate.  Themes are emerging.

Here is what Dr. Peter’s post provoke in me this morning, but first let’s take a step backward.  Go back to what the Holy Father said, for example, in his 1 January Message for the 2006 World Day of Peace (issued also in Arabic, by the way).   In my opinion, that very useful document is actually a lens through which you can read part of what Pope Benedict has in his playbook for his papacy.

In that Message, Benedict describes the forces which violate the rights of men to have the truth.  Truth is a binding theme for Joseph Ratzinger’s theological reflection.  His motto as a bishop and cardinal on his coat of arms was "Cooperatores Veritatis… Coworkers of the Truth" (from 3 John 1:8).  Let’s look at the Message for a moment before reading what I think is the most important part of his address to the plenary of the Congregation for Causes of Saints.

In the 2006 Message for the World Day of Peace, the Holy Father explored among other things the connection between peace and the Truth.  He spoke about the nature of lies and mendacity.  Then he addressed himself to two violations of the Truth which also violate peace and the rights of man: religious fundamentalism and nihilism.  He said:

10. Looked at closely, nihilism and the fundamentalism of which we are speaking share an erroneous relationship to truth: the nihilist denies the very existence of truth, while the fundamentalist claims to be able to impose it by force. Despite their different origins and cultural backgrounds, both show a dangerous contempt for human beings and human life, and ultimately for God himself. Indeed, this shared tragic outcome results from a distortion of the full truth about God: nihilism denies God’s existence and his provident presence in history, while fanatical fundamentalism disfigures his loving and merciful countenance, replacing him with idols made in its own image. In analyzing the causes of the contemporary phenomenon of terrorism, consideration should be given, not only to its political and social causes, but also to its deeper cultural, religious and ideological motivations.

This was clearly a political comment aimed at two kinds of regimes: those dangerous dinosaurs which are still mired in the materialistic system of Communism (such as N. Korea, the PCR, Cuba, etc.) and also the newer serpents of Islamic fundamentalism (leading even today to ongoing genocide in certain hot zones).  In the areas targeted by Pope Benedict, a savage persecution of Christians taking place.   Except in a few cases and places (such as Saudi Arabia) the persecutors will not admit that it is because of the Christian faith that they are oppressing people.  For example, in the People’s Republic of China it is claimed that Christians might give loyalty to a foreign power rather that the people or state, etc.  Benedict’s point was clear in that 2006 Message for the World Day of Peace.  It was also far more pointed than anything I recall from his predecessor.

Now turn back to his address to the Congregation for Causes of Saints and the point Dr. Peter’s was making about martyrdom.  NB: Martyrs are murdered because of hatred of the Christian faith or those Christian virtues which are part and parcel with living the Christian faith.  Their death is a supreme act of charity, in which the other virtues, in that moment, are entirely embraced and exemplified, thus bearing witness to the faith in Christ, the Gospel and the Church.  Benedict said (my translation from the Italian and emphasis):

If the motive that drives one to martyrdom remains invaried, having in Christ the source and the model, on the other hand changed are the cultural contexts of martyrdom and the strategies "ex parte persecutoris" ("on the part of the persecutor), who is always seeking to make evident less and less in an explicit way his aversion to the Christian faith or to a style of life connected with the Christian virtues, but rather feigns different reasons, political or social reasons for example. 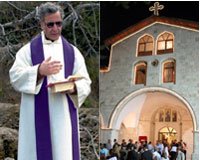 Put another way, the Congregation and those involved in the causes must work diligently to gather the necessary proofs (testomonies, documents, etc.) which can demonstrate that the person killed was really killed because of hatred of the Faith or those things intimately bound to the Faith.  They must discover if the person killed was accepting martyrdom for the love of God, etc.

This is often difficult because today those who persecute Christians are not necessarily shouting their reasons when they kill someone.  To contextualize this a little, the Pope, the Diocese of Rome, indeed all of Italy, was deeply moved by the murder, perhaps martyrdom, of an Italian priest of the Diocese of Rome who was serving in Turkey.  Fr. Andrea Santoro was shot dead by a young man shouting "Allahu Akbar".  However, some are saying that the priest, was actually killed not for religious reasons but rather by local organized crime members because of his work to help women get out of prostitution.  Pro-Islamic press is spinning it one way, others are taking the other view.  This is an example of what Pope Benedict is taking about in his address to the Congregation.

Pope Benedict’s comments are full of insight.  In the prevailing relativistic culture (another of his themes) there is a true hatred for things Christian and those who embrace Christianity, especially the fullness of Christianity which is in the Catholic Christian Faith and Church.

I thank Dr. Peter’s for stimulating my mind today.