Friends who come to Rome and request tours from me know that I am interested in obelisks and, what’s more, I expect them to be also. These pointed monuments are fascinating. Yesterday I posted about catching the shadow cast by the obelisk at St. Peter’s Basilica on the pavement precisely at solar noon, the moment of the summer solstice. A blogger contributed a comment about Pliny on obelisks and… well… now you have me started. I promise I will be brief, but I expect you all to be riveted by these pointed by brief comments.

There are 13 ancient obelisks, 9 Egyptian and 4 Roman fakes. There was one from Ethiopia, which has been returned. There are several modern copies. The grand total of large obelisks in Rome is 19. It is fun to spend a day finding them all!

Staying with the solar and sundial theme, did you know that one of the obelisks brought to Rome by the ancient Roman Emperors functioned as the point of a sundial, or gnomon, for a large time piece made by Augustus Caesar in the Campus Martius? No? Well here is some more about it.

This red granite obelisk was set up by Psammetichus II (say that 5 times fast! ) in Heliopolis in the 7th c. and was brought to Rome by Augustus in 10 B.C. He set it up just a little way from where I live in the Campus Martius (the level ground between the slopes of the Capitoline, the Quirinal, and the Pincian hills, and the Tiber River). It is 21.79 metres in height and is or at least was covered with hieroglyphics. It was still standing during the 8th century but at some point fell over and sank into the gook and was simply built over. This often happened with the obelisks. In any event, this particular gem was rediscovered in 1512 and then extracted from its subterranean hole in 1748. I have a photo of the memorial inscription of the witty and erudite scholar Pope Benedict XIV down below. Eventually it was set up in the Piazza di Montecitorio in 1789 where it stands now not too far away from its original location. It shows many repairs with chunks taken from the Columna Antonini. When you go to the Vatican Museum you will see the perfectly preserved base of the Antonine Column which even shows an image of this very obelisk!

Back in the day, Augustus had dedicated this obelisk to the sun and made it the gnomon of his sundial. Long curvy lines and bronze markers (some of which have been found, see photo below) marked the square around it.

Here is the inscription on the base commemorating how Augustus brought it to Rome and “gave it as a gift to the sun”. Centuries later a better sort of Pontifex Maximus, Benedict XIV, would echo this language.

EMPEROR AUGUSTUS CAESAR, SON OF DIVINE [Julius], (the) HIGH PRIEST, [in the year he had] IMPERIUM (for the) 12th (time), was CONSUL (for the) 11th (time), (and had) TRIBUNITIAN POWER (for the) 14th (time), GAVE (this obelisk), BROUGHT FROM EGYPT (for a sign of the) MIGHT OF THE ROMAN PEOPLE, AS A GIFT TO THE SUN.

The bronze markings were first found in 1484 with mosaic figures for the zodiacal symbols and the winds. Some of this has been elegantly reconstructed in its present (new) position. Bronze markers that were discovered are in a glass case (see below) next to a bar in the Via di Campo Marzio between the Piazza del Parlamento and the Piazza S. Lorenzo in Lucina.

The sundial was probably only useful

l for solar noon, since the area around it, if you do the math (and people have), would have vast indeed. The plaza without “horizon pollution” from buildings would have been the a semi-ellipse with an east-west major axis 436 meters long of which the obelisk would be the midpoint; and a semi-minor axis (northwards only from the obelisk) 50 meters long. The Piazza S. Pietro is an ellipse whose major axis measures “only” 240 meters!

The natural historian Pliny some seven decades after the thing was erected, notes that the shadow was “off”, perhaps because of an earthquake (cf. Nat. Hist. 34,73).

In the last couple years a line for solar noon on the pavement was added to the Piazza Montecitorio. I have a shot of the summer solstice marker of the modern version. Note at the bottom, the precise time of the solar noon, the solstice is 12:11! The sun (historically) passed into Cancer at this moment. Yesterday I noted that the Vatican calendar gave the time as 13:26, which must have been calculated somewhere else. However, I suspect that at the Vatican obelisk, the real noon must be something like 12:12 0r 12:13. Remember, due to the procession of equinoxes when the solstice occurs in June the sun is now in Taurus not Cancer (it used to be in Cancer when the Tropic of Cancer was named).

If you were standing on the Tropic of Cancer at solar noon on the solstice, the longest day of the year, your shadow would be exactly below you, and not stretch out at all. Everywhere else to the north of the Tropic of Cancer, this is the moment when your shadow is the shortest.. To the south, in the southern hemisphere, your shadow is the longest on this day, analogously with the length of our northern winter shadow at the winter solstice, the shortest day of the year.

Here is the inscription of Pope Benedict XIV in front of the Parliament building about where the solar obelisk of Augustus was originally found. 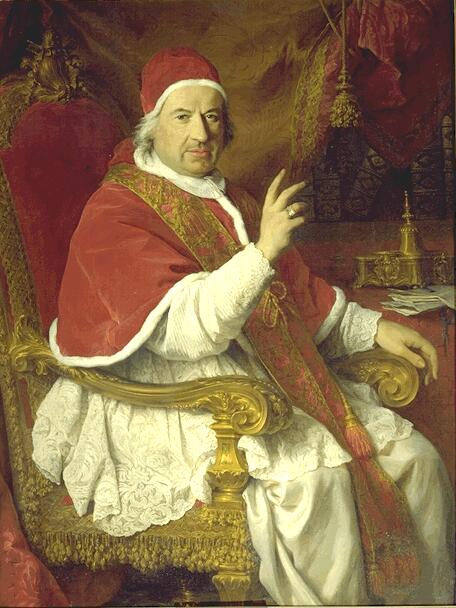 Maybe one of you can take shot at this? It is really baby talk, once you find the subject (at the top) and the verbs ERUIT and TRANSTULIT and JUSSIT and the object OBELISCUM… INSCULPTUM/ADVECTUM/ERECTUM/DICATUM/JACENTEM/OBRUTUM. It’s fun! Take a shot at it! NB: There is lines over some “U”s, which are “M”s.

Here is the glassed in case in the V. di Campo Marzio showing the rediscovered bronze markers of the ancient sundial.

Fr. Z is the guy who runs this blog. o{]:¬)
View all posts by Fr. John Zuhlsdorf →
This entry was posted in Just Too Cool, Look! Up in the sky!, My View, SESSIUNCULA. Bookmark the permalink.