The Pope’s Book: Jesus of Nazareth 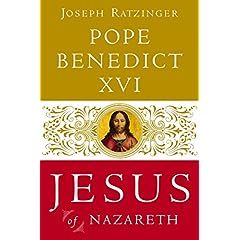 I was at the presentation of the Pope’s book, Jesus of Nazareth in the Aula del Sinodo on Friday 13 April 2007.  Others will write about or post the talks by the presenters.  You can pre-order the book in English, and help WDTPRS, by using the link above or here.

Here are some of my personal notes.  I do not intend to recap the book (impossible) or speakk much about the press conference (a waste of time).  They are intended only to help you read Joseph Ratzinger’s work more fruitfully.

It is not new to receive a book from a Pope.  In the past, they were the fruits of interviews, or they were biographical or poetry.  But this is a work of theology.  That’s new.  Even though it is a work of theology, it is not a contribution to the Magisterium.  That’s new.  This point was heavily stressed in the presser.  This book is a contribution of “Joseph Ratzinger” to all who are interested in Jesus.  The novelty of this book is its context, coming as it does from a Pope.

The book is intended to be “pastoral”.  At the same time it is to be “a rigorous work of theology”.  I am not sure how the pastoral thing is going to work out: the Italian edition has 446 dense pages.   And I mean conceptually dense.  It is truly the work of Joseph Ratzinger.  As a matter of fact, all the editions I saw (Greek, Polish, Italian, English, German, Italian, French, Spanish) print the name “Benedict XVI” much larger than the name “Joseph Ratzinger” on the dust cover, but he signs his preface: “Joseph Ratzinger – Benedict XVI”, as if, for the sake of this book, his being Pope is incidental.   I am not sure that his being Pope will be incidental for sales, however.

He wrote the book duing the last few summers, which astonishes me, given his many cares.  Clearly he gave a lot of thought to it before he wrote it.  Thought and prayer, which turns out to be an important dimension of the book.  Without snuffing out faith in his intellectual examination Pope Ratzinger remains an objective hunter after the Truth.  So, the Pope puts himself into the modern public square, the post-Christian and post-modern areopagus.  He does so as a man of rigorous intellectual discipline but also a man of faith.  Faith not just in abstractions, but in a Person.

Returning to that notion of "pastoral" a couple side comments are in order.  For a very long time now there has been a false dichotomy between “pastoral” and anything intellectually exacting.  I can’t say how many times I hvae heard bishops and priests divorce "pastoral" and all those other bad things like being smart, or being exacting.  Many are therefore baffled by the Pope’s life-long ability to work within both categories.

Another relevant tangent: His Holiness has a global or “organic” vision of theological method.  The same goes for liturgy.  This is a key to understanding one of his motives for a derestriction the older form of Mass.  The older form would influence the newer form, and vice versa, resulting in a tertium quid.  What His Holiness is doing in this book is what he has done in all the fields which interest him.  Whether it has to do with the “source and summit” of Christian life (the Eucharist and It’s celebration), or a vision of Europe which has the indispensable structure of Christendom at its core, philosophy or theology, or explaining the relationship of faith and reason, Ratzinger does not create false divisions.

The Holy Father, as a working theologian, therefore makes use of the modern tools of scientific method, but always with logical priority given to what is known by faith in revelation.  Therefore, he does not destroy the very biblical texts he so closely examines.  This has been a problem of the application of the scientific method of the Scripture scholarship, that is the study that does not reduce the Bible to literature only, for many decades.

You will remember that during his Mass for Holy Thursday the Pope caused a bit of surprise by using modern research on the nature of the Last Supper.  In his book, Benedict makes use of modern research on the figure of St. John the Baptist.  As Pope, he demonstrates that he is willing to move outside the golden cage of pontifical precedents and Patristic glosses.  The Pope doesn’t limit himself to Denziger-Schoenmetzer.

Since Joseph Ratzinger during his long career as a theologian has not fallen into the trap of reducing the object of his contemplation to a formula or abstraction there is a chapter on prayer, in which he explains the “Our Father”, which is the prayer Christ taught us.  The Pope stays very close to the Scriptural texts in every move he makes in this book.  Card. Schoenborn related his personal experience of the Pope as a teacher and then colleague.  He said that the Pope never was without his little Nestle-Aland edition of the New Testament in Greek.

One of the engines driving Pope Ratzinger’s book was his reading a work 15 years ago by a rabbi, Jakob Neusner, A Rabbi Talks With Jesus.  Benedict returns often to his insights.  For example, His Holiness recounts his reading of Neusner’s book, wherein Neusner spends a day with Jesus, following him in an interior dialogue and then returns to his study of Torah with other rabbis.  One rabbi says to the interior Neusner, “613 precepts were given by Moses, 365 negatives ones corresponding to the number of days of the year and 248 positives corresponding to the number of parts of the body.  David comes along and reduces them to 11… Isaiah reduces them down to 2.  Habakkuk distills them to one only, as it is written: ‘The righteous one will live by his faith (Hab 2,4)’.  ‘And so’, a rabbi asks the interior Neusner, ‘is this what Jesus has to say?’,  Neusner responds, ‘ Not quite, but almost.’  The other rabbi: ‘What did he leave out?’  Neusner: ‘Nothing.’  The other rabbi: ‘Then what did he add?’  Neusner: ‘Himself.’  The point being that Neusner will not follow Jesus because of the radical “I” of Jesus’ message.  Neusner cites Matthew 19:21: “If you want to perfect… follow me.”  For Ratzinger, this helps create a conceptual bridge: “The perfection required by the Torah, being holy as God is holy (cf. Lev 19,2; 11,44), now consists in following Jesus.”

This little episode from Pope Benedict’s book is an object lesson in his theological method.  He is always concerned to keep faith and reason in the right perspective, but always in play in their proper roles.  Moreover, Ratzinger has always used interesting non-Christian or non-Catholic, or even errant doctrines as springboards for theological work.  No one who has read enough Ratzinger is surprise that he does this, even though his nimbleness leaves one a bit breathless.  For example, I think it can be argued that Joseph Ratzinger probably knows more about Liberation Theology than anyone.  If might surprise some that he uses points of Liberation Theology in one of his own works on liturgy.  Consider using the image of Christ is “Liberator” when working theologically with liturgical issues.  This is what he did in A New Song for the Lord: Faith in Christ and Liturgy Today.

The Pope sets out like so many, to search for the Historical Jesus.  Someone is always doing this, of course.  Jesus is usually morphed into someone else every thirty years or so, and always at the expense of Jesus Himself.  These these searches wind up emphasizing one dimension of Christ into order to underscore another.  Understanding that there will always be more to say about Jesus, the Pope offers this work, fully expecting that it will be met with resistance and criticism from some circles.

But this book was not really written against modern theological work and socio-historical research, that is, as a polemic.  The Pope recognizes how much modern work as contributed.  He strives to present a more logical and comprehensible figure than what we have found in the last few years of trumpeted “discoveries” about the “historical Jesus”.  For Benedict, the Jesus presented in the Gospels is a believable figure.

As Card. Schoenborn phrased it in the press conference for the book’s presentation, the penchant for seeing Jesus as a Revolutionary or the lover of Mary Magdalene, to name but a couple distortions, can be dumped into the ossuary of history.