There is a very interesting piece from Sandro Magister’s Chiesa on the new discoveries about St. Paul which have recently come to light.

This is one you want to read carefully… especially you seminarians out there. 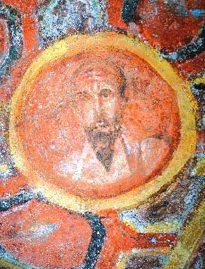 New Discoveries. Why St. Paul Was Given a Philosopher’s Face

The oldest depiction of the apostle has been found just a short distance from his tomb, which is also the object of new investigations. The Church wanted to represent him as the Christian Plato. [interesting] A daring decision. And still extremely relevant, even today

ROME, June 30, 2009 – The year dedicated to St. Paul, two millennia after his birth, has concluded with two important discoveries announced on the same day, the vigil of the saint’s feast.

The first discovery was revealed by Benedict XVI in person, in his homily for vespers on June 28, in the Roman basilica of St. Paul’s Outside the Walls:

"We are gathered at the tomb of the apostle, whose sarcophagus, kept under the papal altar, was recently made the object of a careful scientific analysis. A tiny perforation was made in the sarcophagus, which had not been opened for many centuries, for a special probe that picked up traces of a valuable linen cloth dyed purple, laminated with pure gold and a blue-colored cloth with linen thread. It also detected grains of red incense and of substances containing protein and calcium. Moreover, very tiny fragments of bone, subjected to Carbon-14 dating by experts who were unaware of their origin, were determined to belong to a person who lived between the first and second centuries. This seems to confirm the unanimous and unopposed tradition that these are the mortal remains of the apostle Paul."

So for Paul, too – as also for the apostle Peter, whose tomb has already been identified with certainty beneath the main altar of the basilica of St. Peter at the Vatican – there is important confirmation that he is buried precisely where he has always been venerated: under the main altar of the Roman basilica dedicated to him.  [Time and again, we see how modern science confirms what the ancients said.]

The second discovery was announced by "L’Osservatore Romano" in its June 28 edition.

It is the discovery of the oldest known depiction of the apostle Paul, dating back to the fourth century: the depiction reproduced at the top of this page. This image of Paul emerged last June 19, from the excavations that are underway in a catacomb named after St. Thecla, along the Via Ostiense leading from Rome to the sea, a short distance from the basilica of the apostle.

Using laser beams to clean the vault of a niche, the archaeologists saw a rich fresco decoration reemerge. At the center of the vault appeared the image of the Good Shepherd, surrounded, in four arches, by the figures of Paul – the best preserved of the four – of Peter, and probably of two other apostles.

The archaeologists Fabrizio Bisconti and Barbara Mazzei provided all of the details of the discovery in two extensive accounts in the newspaper of the Holy See. But one element is more striking than all the rest. And it concerns the reasons that led to depicting the apostle Paul as we see him in this fresco, and then in so many others that followed: with the appearance of a pensive philosopher, with the penetrating expression, the high forehead, the incipient baldness, the pointed beard.

In effect, in an art exhibition dedicated to St. Paul and inaugurated a few days ago in a wing of the Vatican Museums, two of the pieces on display are busts made in the Roman era, of two philosophers – one of which is probably Plotinus – who bear a strong resemblance to the ancient depictions of Paul, beginning with the one that has just been discovered.

The same question is posed for the apostle Peter, who is traditionally depicted with short, thick white hair, his face broad and his expression decisive, his beard also short and full. And so on for other characters of sacred history.

Portraiture was very widespread in Greek and Roman art. But in Jewish culture, human images were forbidden, and therefore it was unthinkable that Paul and the others would have themselves depicted. It was only later that the Church accepted the depiction of figures of the Christian faith.

But how? Here is the evocative explanation given by Professor Antonio Paolucci, director of the Vatican Museums and a great art historian, in presenting the exhibition on St. Paul:

"The problem was posed between the third and fourth centuries, when a Church that had become widespread and well structured made the great and brilliant wager that is at the basis of our entire artistic history. [very cool] It accepted and made its own the world of images, and accepted it in the forms in which the Greco-Roman stylistic and iconographic traditions had developed it. It was in this way is that Christ the Good Shepherd took on the appearance of Pheobus Apollo or Orpheus, and that Daniel in the lion’s den had the appearance of Hercules, the victorious nude athlete.

"But how could one represent Peter and Paul, the princes of the apostles, the pillars of the Church, the foundations of the hierarchy and doctrine? Someone got a good idea. He gave the first apostles the appearance of the first philosophers. So Paul, bald, bearded, with the serious and focused air of the intellectual, had the appearance of Plato or perhaps of Plotinus, while that of Aristotle was given to the pragmatic and worldly Peter, who has the task of guiding the professing and militant Church through the snares of the world."

If this is what happened, then the Church in the early centuries had no reservations about attributing to the apostles, and to Paul in particular, the title of philosopher, nor of handing down, studying, and proclaiming in its entirety his thought, which is certainly not easy to understand and accept.

The same can be said of the Fathers of the Church. In a phase of Christianity in expansion, in a phase in which the transmission of the Christian faith to the Gentiles was in full development, the Church never considered watering down or domesticating its own message in order to make it more acceptable to the men of the time.  [Thus the high dependence of many of the Fathers on Platonism in its variious forms.]

The depiction of Paul the philosopher is an eloquent warning to those who today deny relevance to a pope theologian like Benedict XVI, a modern Father of the Church.

Fr. Z is the guy who runs this blog. o{]:¬)
View all posts by Fr. John Zuhlsdorf →
This entry was posted in Just Too Cool, SESSIUNCULA. Bookmark the permalink.