Well… it usually doesn’t wait because I have a routine.

I think this article deserves a little thought.

Before books, people interacted in a different way during the day.

Before electricity, the day had a different rhythm.

Before radio, people interacted in a different in the evening.

Before TV, people interacted in a different way at meals.

Before cellphones, people had a different pace of long distance coms.

Are we losing something critical?  Do we gain something still hard to characterize.

From the NYT with my emphases and comments. 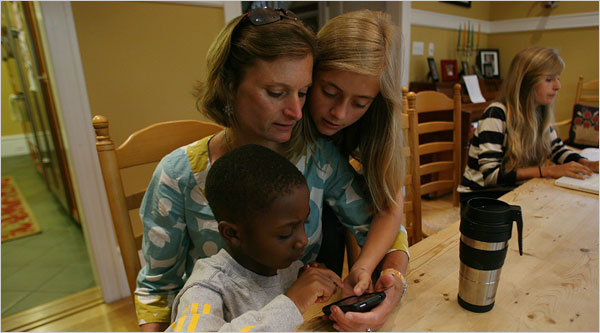 Karl and Dorsey Gude of East Lansing, Mich., can remember simpler mornings, not too long ago. They sat together and chatted as they ate breakfast. They read the newspaper and competed only with the television for the attention of their two teenage sons.

That was so last century. Today, Mr. Gude wakes at around 6 a.m. to check his work e-mail and his Facebook and Twitter accounts. The two boys, Cole and Erik, start each morning with text messages, video games and Facebook.

The new routine quickly became a source of conflict in the family, with Ms. Gude complaining that technology was eating into family time. But ultimately even she partially succumbed, cracking open her laptop after breakfast.

“Things that I thought were unacceptable a few years ago are now commonplace in my house,” she said, “like all four of us starting the day on four computers in four separate rooms.”  [separate rooms… in the same room?  difference?]

Technology has shaken up plenty of life’s routines, but for many people it has completely altered the once predictable rituals at the start of the day.

This is morning in America in the Internet age. After six to eight hours of network deprivation — also known as sleep — [redefining terms… appropriate]  people are increasingly waking up and lunging [great word choice… this is well written] for cellphones and laptops, sometimes even before swinging their legs to the floor and tending to more biologically urgent activities.  [urgent activities are in two categories…. technical and biological.  What about spiritual?  What happens to the morning offering.  QUAERITUR: Do you make a morning offering as the first thing?  I think this can be developed into a habit.  You must condition yourself to this: turn the first thought of the day to God.  The longer I live, the less optimistic I am about death bed conversions in this day and age.  We should foster these habits.]

“It used to be you woke up, went to the bathroom, maybe brushed your teeth and picked up the newspaper,” said Naomi S. Baron, a professor of linguistics at American University, who has written about technology’s push into everyday life. “But what we do first now has changed dramatically. I’ll be the first to admit: the first thing I do is check my e-mail.” [Think about it.  Have you put off going to the bathroom because you needed to hit F-5?  I have done that.  I don’t do that anymore.]

The Gudes’ sons sleep with their phones next to their beds, so they start the day with text messages in place of alarm clocks. Mr. Gude, an instructor at Michigan State University, sends texts to his two sons to wake up.  [Now that is interesting.  In the 19th c. Royal Navy, cots would but cut down with a knife.]

“We use texting as an in-house intercom,” he said. “I could just walk upstairs, but they always answer their texts.”  [For the young, the SMS has immediate impact.] The Gudes recently began shutting their devices down on weekends to account for the decrease in family time.

In other households, the impulse to go online before getting out the door adds an extra layer of chaos to the already discombobulating morning scramble.

Weekday mornings have long been frenetic, disjointed affairs. Now families that used to fight over the shower or the newspaper tussle over access to the lone household computer — or about whether they should be using gadgets at all, instead of communicating with one another.

“They used to have blankies; now they have phones, which even have their own umbilical cord right to the charger,” [Plus ça change… ] said Liz Perle, a mother in San Francisco who laments the early-morning technology immersion of her two teenage children. “If their beds were far from the power outlets, they would probably sleep on the floor.”  […. hmmm… hmmm…. societal…. global… addiction?  Sounds like something from a Dr. Who episode.]

The surge of early risers is reflected in online and wireless traffic patterns. Internet companies that used to watch traffic levels rise only when people booted up at work now see the uptick much earlier.

Arbor Networks, a Boston company that analyzes Internet use, says that Web traffic in the United States gradually declines from midnight to around 6 a.m. on the East Coast and then gets a huge morning caffeine jolt. “It’s a rocket ship that takes off at 7 a.m,” said Craig Labovitz, Arbor’s chief scientist.

Akamai, which helps sites like Facebook and Amazon keep up with visitor demand, says traffic takes off even earlier, at around 6 a.m. on the East Coast. Verizon Wireless reported the number of text messages sent between 7 and 10 a.m. jumped by 50 percent in July, compared with a year earlier.  [Cf. WDTPRS.]

Both adults and children have good reasons to wake up and log on.  [They are …. Catholic?] Mom and Dad might need to catch up on e-mail from colleagues in different time zones.  [Oh, how I can identify!] Children check text messages and Facebook posts from friends with different bedtimes — [Remember: I can go anywhere and call for a blognic and 30 people show up.  This is not a surprise.  We are interconnected in new ways.] and sometime forget their chores in the process.  [A parental problem.]

In May, Gabrielle Glaser of Montclair, N.J., bought her 14-year-old daughter, Moriah, an Apple laptop for her birthday. In the weeks after, Moriah missed the school bus three times and went from walking the family Labradoodle for 20 minutes each morning to only briefly letting the dog outside.  [Addiction?  Parental issue?]

Moriah concedes that she neglected the bus and dog, and blames Facebook, where the possibility that crucial updates from friends might be waiting  [OMG! OMG! There might, like… OMG… be like a like update to WDTPRS!] draws her online as soon as she wakes. “I have some friends that are up early and chatting,” she said. “There is definitely a pull to check it.”

Some families have tried to set limits on Internet use in the mornings. James Steyer, founder of Common Sense Media, a nonprofit that deals with children and entertainment, wakes every morning at 6 and spends the next hour on his BlackBerry, managing e-mail from contacts in different parts of the world.  [Yah… I get a LOT of e-mail.]

But when he meets his wife, Liz, and their four children, ages 5 to 16, at the breakfast table, no laptops or phones are allowed.  [Do I hear an "Amen!"?]

Mr. Steyer says he and his sons feel the temptation of technology early. Kirk, 14, often runs through much of his daily one-hour allotment of video-game time in the morning.  [So… some values clarification needs to take place.  You should much rather spend that time checking your social networking pages!]

Even Jesse, 5, has started asking each morning if he can play games on his father’s iPhone. [Yah.  Because size matters.  There is a charm, isn’t there, to playing on a phone.  I am up to level 31 on Bejewelled just from sitting in airports.]  And Mr. Steyer said he constantly feels the tug of waiting messages on his BlackBerry, even during morning hours that are reserved for family time.

“You have to resist the impulse. You have to switch from work mode to parenting mode,” Mr. Steyer said. “But meeting my own standard is tough.”

Fr. Z is the guy who runs this blog. o{]:¬)
View all posts by Fr. John Zuhlsdorf →
This entry was posted in Global Killer Asteroid Questions, SESSIUNCULA, The future and our choices. Bookmark the permalink.