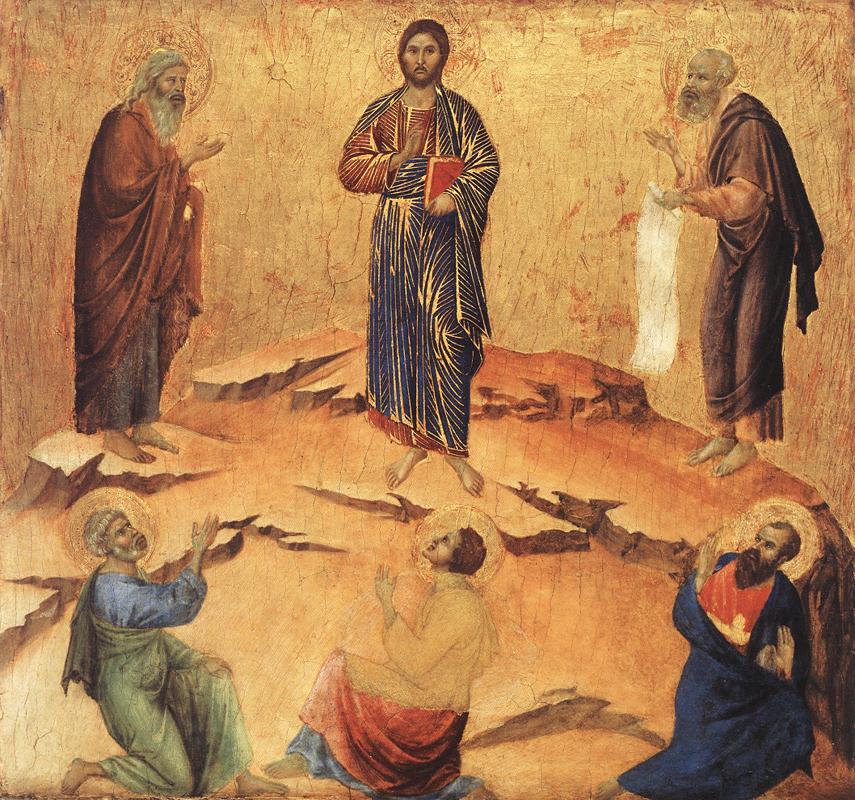 The Mystery of the Transfiguration was a matter of intense reflection on the part of the Fathers.

Remember that this takes place some eight days after the Lord confers the keys on Peter by the Jordan at Caesarea Philippi.  The Fathers thought everything in Scripture was significant and they attached great meaning to numbers.  Let us see what the mighty Ambrose of Milan (+397) has to say about the timing of the Transfiguration in relation to the events at Caesarea Philippi:

You may know that Peter, James and John did not taste death and were worthy to see the glory of the resurrection.  It says, "about eight days after these words, He took those three alone and led them onto the mountain." Why is it that he says, "eight days after these words"?  He that hears the words of Christ and believes will see the glory of Christ at the time of the resurrection.  The resurrection happened on the eight day, and most of the psalms were written "For the eighth".  (cf. e.g., Ps 6:1; 12:1 LXX and Vulgate)  It shows us that He said that he who because of the Word of God shall lose his own soul will save it, (Luke 9:24) since he renews his promises at the resurrection.  (Matthew 16:25-27)  But Matthew and Mark say that they were taken after six days.  (Cf. Matthew 17:1; Mark 9:2)  We may say that they were taken after six thousand years, because a thousand years in God’s sight are as one day.  (Ps 89:4 LXX)  We counted more than six thousand years.  We prefer to understand six days as a symbol, because God created the works of the world in six days (Gen 2:1), so that we understand works through the time and the world through the works.  [Exposition of the Gospel of Luke 7.6-7]

St. Augustine (+430) also gets into this issue of six days, as recounted in Matthew and Mark, and eight days (as in Luke) in a discussion of the resurrection three days after the Passion and death of the Lord.  He is trying to make sense of the numbers.  In other places I have explained how the ancients numbered their periods of days, that is, inclusively.

St. Cyril of Alexandria (+444) wrote of the Transfiguration in terms of the connection between suffering and glory, between the Law and the Prophets, between the foreshadowings of the past and their fulfillment.

"I say to you, there are some of those standing here who shall not taste of death until they have seen the kingdom of God." … By the "kingdom of God" He means the sight of the glory in which He will appear at His revelation to the inhabitants of earth.  He will come in the glory of God the Father and not in a humble condition like ours.  How did He make those who received the promise spectators of a thing so wonderful?  He goes up into the mountain taking three chosen disciples with Him.  He is transformed to such a surpassing and godlike brightness that His garments even glittered with rays of fire and seemed to flash like lightning.  Besides, Moses and Elijah stood at Jesus’ side and spoke with one another about His departure that He was about, it says, to accomplish at Jerusalem.  This meant the mystery of the dispensation in the flesh and of His precious suffering upon the Cross.  It is also true that the law of Moses and the word of the holy prophets foreshadowed the mystery of Christ.  the law of Moses foreshadowed it by types and shadows, painting it as in a picture.  The holy prophets in different ways declared before hand that in due time He would appear in our likeness and for the salvation and life of us all, agree to suffer death on the tree.  Moses and Elijah standing before Him and talking with one another was a sort of representation.  It excellently displayed our Lord Jesus Christ as having the law and the prophets for His bodyguard.  It displayed Christ as being the Lord of the Law and the Prophets, as foretold in them by those things that they proclaimed in mutual agreement beforehand.  The words of the prophets are not different from the teachings of the law.  I imagine this was what the most priestly Moses and the most distinguished of the prophets Elijah were talking about with one another.  [Commentary on Luke, Homily 51]

The last line here is interesting.  It makes me call to mind what one finds in studying ancient historiography, such as Herodotus and Thucydides.  When reporting the speeches great figures made, about which they might at the very best have some distant report from someone who heard about the content of the speech, such as Pericles’s great oration, from a generation or more removed, Thucydides would record what the great man ought to have said in that momentous occasion.  This sounds much like what Cyril is doing.

Have you ever wondered why some get some graces and others do not?  St. Maximus Confessor (+682) gives an interesting insight while he comments on the Transfiguration:

The Lord does not always appear in glory to all who stand before Him. To beginners He appears in the form of a servant (Phil 2:7); to those able to follow Him as He climbs the high mountain of His Transfiguration He appears in the form of God, the form in which He existed before the world came to be (John 17:5). It is therefore possible for the same Lord not to appear in the same way to all who stand before Him, but to appear to some in one way and to others in another way, according to the measure of each person’s faith. When the Logos of God becomes manifest and radiant in us, and His face shines like the sun, then His clothes will also look white. That is to say, the words of the Gospel will then be clear and distinct, with nothing concealed. And Moses and Elijah – the more spiritual principles of the Law and the Prophets – will also be present with Him.

"Now after six days Jesus took Peter, James and John his brother, led them up on a high mountain by themselves;" (Matt. 17:1) …Note, I pray you, the severe goodness of Matthew, not concealing those who were preferred to himself. Also, John often does this (in his Gospel), recording the peculiar praises of Peter with great sincerity. For the choir of these holy men (disciples) was everywhere pure from envy and vainglory. Having taken, therefore, the leaders, "He was transfigured before them. His face shone like the sun, and His clothes became as white as the light. And behold, Moses and Elijah appeared to them, talking with Him." (Matt. 17:2,3) Why does Jesus take with Him these three only? Because these were superior to the rest. And, Peter indeed showed his superiority by exceedingly loving Him; John; by being exceedingly loved by Him; and James again by his answer which he gave with his brother, saying "We are able (to drink this cup);" (Matt. 20:22) but not by this answer only, but also by his works …For so earnest was he (James), and so grievous to the Jews, that Herod himself supposed that he found favor with the Jews by slaying him (James)."  [St. John Chrysostom, Homily 56]

I suppose we ought to be careful what we ask for.  Our earthly fate notwithstanding, we are always able to have a moment of Transfiguration in the proper reception of Holy Communion, which is far more than a mere vision of something of Christ’s divine shining through our humanity.  The Eucharist is not only the Body, Blood, Soul and Divinity of Christ, it is for us a "pledge of future glory, containing in Itself all delight", as St. Thomas Aquinas (+1274) wrote for the feast of Corpus Christi, and which we all sing whenever there is Benediction of the Blessed Sacrament.  A good reception of Communion is an even greater encounter with the Lord, than a Transfiguration.  It opens up the way to a bright future for us.  On that note, Gregory of Nazianzus (+389) ties us all into the mystery of the Transfiguration, saying:

He was bright as the lightning on the mountain and became more luminous than the sun, initiating us into the mystery of the future.  [Oration 3.19, On the Son]

Fr. Z is the guy who runs this blog. o{]:¬)
View all posts by Fr. John Zuhlsdorf →
This entry was posted in Classic Posts, Linking Back, Patristic Rosary Project. Bookmark the permalink.