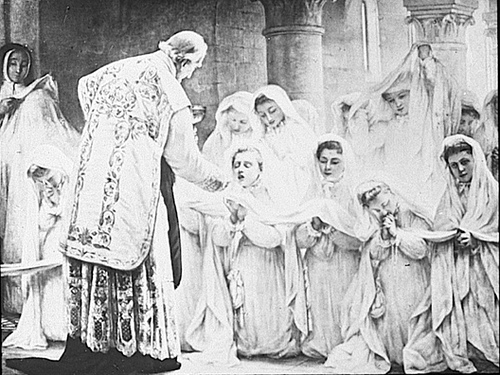 A reader sent the following about Q&A in The Catholic Times, the official newspaper of the Diocese of Springfield in Illinois.  Father John Dietzen writes his column for Catholic News Service from his home in Peoria.

So, I assume this column gets picked up by numerous diocesan newspapers, and not merely the aforementioned Catholic Times.

Q A few weeks ago, near our daughter’s home, we attended a church with a Communion rail, the first one I’ve seen in many years. With people receiving Communion almost all the time standing, the rails are obviously no longer necessary. But we wondered, when did the rule that Catholic churches need a Communion rail cease? Why would this church have one? (Florida)

A There was never a rule or even an official suggestion that churches have Communion rails. They became common, in fact, only a few hundred years ago.

In his scholarly book From Age to Age: How Christians Have Celebrated the Eucharist (Liturgical Press), Capuchin Father Edward Foley traces the widespread use of Communion rails to the trend toward uniformity of Catholic liturgy, doctrine and architecture after the Council of Trent (1545-1563).

For example, until this time, tabernacles were liturgical vessels much like chalices, even sometimes hanging from the ceiling or wall. Cardinal Charles Borromeo, archbishop of Milan, a significant figure at that council, preferred the tabernacle to be placed on the altar where the Eucharist was celebrated. For centuries, his influence solidified both that custom and later law in parishes around the world.

Something similar happened with the Communion rail, when the faithful began to kneel to receive Communion. As Foley describes it: “According to Jungmann (Josef Jungmann, whose Mass of the Roman Rite is a classic on the history of the celebration of the Eucharist), these (Communion rails) seem to have developed from the practice of spreading a cloth for communicants kneeling at the altar; eventually these cloths … evolved into the Communion rail.”

As you indicate, new and remodeled Catholic church spaces today are more open, rarely with Communion rails separating the priest and the altar from the people. Perhaps the priest in the church you visited just feels for some reason there ought to be one.

I will have to differ in some respects from what Fr. Dietzen has offered.

The development of the communion or altar rail seems to be more complicated than that.

If probably developed from chancel screens which would screen the view of the sanctuary and also the wall dividing the choir area in basilicas from the rest of the nave.   These barriers go back to the earliest times of the Church.  They were intended to separate the space of the clergy from that of the laity, to mark better the place of the most holy part of the action and, as a practical issue, probably help to to keep critters (not just the congregation) from wandering into the sanctuary at the wrong time.

For example, in 5th c. N. Africa St. Augustine speaks in a sermon about a railing or barrier in a church in Carthage.  Read s. 359B. Perhaps I should do a PODCAzT on that.  It is a real kick to get a snapshot of a day in ancient Carthage.  The 5th c. historian Theodoret in his Ecclesiastical History describes how St. Ambrose forbade the Emperor Theodosius form entering the sanctuary past the rail.

The barrier which fittingly – and with deep symbolic meaning – separates the sanctuary (the place of the priests and of sacrifice) and the nave (the place of the congregation) would come together under the weight of that greater understanding of the nature of the Eucharist which lead to more careful and reverent reception of Holy Communion.  It is both practical and symbolic.

The altar or communion rail was not merely to facilitate the reception of Holy Communion to keeling communicants (which is a practice devoutly to be wished and, please God, will return), but it has the symbolic meaning.  I think most if not all people who are against altar rails, if they are not just ignorant, are really just no very clear about the different roles of clergy and laity in the liturgical action.

I am not sure if there was ever a decree of, for example, the Sacred Congregation for Rites which required in churches the construction of altar rails.  That said, it strikes me as significant that virtually ever Roman Catholic church built everywhere for centuries had altar rails.  Is that by coincidence and custom merely or was their also legislation?

Given the fact that Communion on the tongue of a kneeling communicant is returning to greater prevalence – and I think will become more and more prevalent, it strikes me as highly imprudent and divisive to remove existing altar rails.  If I heard that a priest intended to remove an existing rail these days, I would want to know more – as a start  -about what he thinks of Pope Benedict.

Fr. Z is the guy who runs this blog. o{]:¬)
View all posts by Fr. John Zuhlsdorf →
This entry was posted in SESSIUNCULA and tagged altar rails, communion rails. Bookmark the permalink.