Today is the final “peak” arising from the liturgical cycle of Advent/Christmas/Epiphany.  Today, called in the traditional way and according to the older Roman calendar the Feast of the Purification of the Blessed Virgin Mary, Holy Church would cease to sing the Marian antiphon associated with Christmas,

It is forty days since Christmas.

In the physical world, we in the Northern hemisphere are beginning to notice more and more the growing of the light of day.  The seemingly endless darkness of the short days has finally in a noticeable way been attenuated. Today’s feast is also about light, in the broader symbolic sense.

This feast has its name from the Blessed Virgin, because the Law in Leviticus required her to go to the temple for purification after giving birth.  The Lord did not need to be baptized by John in the river, for He had nothing to repent.  Mary did not need purification, for she was spotless.  But they desired to fulfill the Law.  This feast also reminds us of the beautiful tradition of the “Churching” of women after childbirth, a special blessing given by the Church, which has alas fallen into desuetude.  “Churching” was done in honor also of this moment in the life Christ’s Mother.

This is, however, really a feast in honor of the Lord: He is being offered to the Father in a foreshadowing of His greater Sacrifice for our salvation.  The theme of offering, of sacrifice draws our eyes away from looking back at Christmas and Epiphany forward to the Passion and Easter. 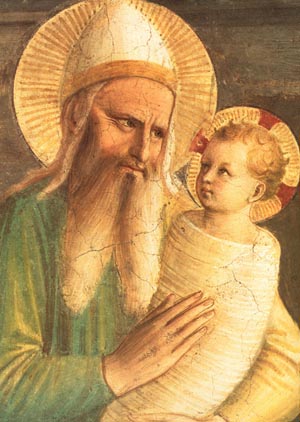 You remember the story from the Gospel, in Luke 2.  Mary and Joseph come to the temple in Jerusalem to fulfill the Law.  Firstborn males had to be dedicated to the Lord. The old woman Anna and the old man Simeon had the special grace from the Lord to have their dearest desires fulfilled before they died: to see the Messiah. It is in this moment that Simeon makes the prophecy about the sacrificial sufferings Mary will endure and he speaks his great Nunc dimittis, which Holy Church sings in the darkness at the end of the day for Compline.

In the traditional Roman liturgy today in larger churches there would be a special blessing of candles and a procession before Mass would begin.  The chants sung for the rite contain many references to light.  Also, a lighted candle is to be held during the reading of the Gospel and during the Roman Canon.  The candle brings to mind also our baptism.

In a way, the faithful really ought to have candles at all Masses.  But now, in High Masses, the “touchbearers” fulfill this role for the congregation.  Remember that the next time you see the candles come in: that’s you up there.

Remember: Holy Church gives us candles so that we will use them.  When I baptize, I suggest to people that they save the candle, with a label indicting what it is and who was there, the name of the priest, etc.  Perhaps then they could save that candle against the day when, perhaps, it might be used as one of the candles on the altar for their wedding, or with a home Communion set, for when they need Last Rites.  The candle you receive on other days of the year, the Vigil of Easter for example, or for Eucharist processions, could be burned in times of trial or danger, as when storms are coming or there is social upheaval.  These candles remind us that we too out to be filled with light for others, in their darkness and difficulties, to see and be guided by.

Candles are beautiful symbols of our sacrifices.  They are like living things.  They eat and drink the wax from the bees, made collectively in association with sweetness.  They breath air.  They move in their flames as they flicker.  They communicate to our eyes a beautiful light and give contrast to their surroundings by illumination.  They burn out at the end of their span.  So do we.  They are consumed for the Lord in the liturgy.  So should we be.  We do all these things.   And so, using candles in important times is a very wholesome and Catholic practice.  Leaving one of these little candles in a Church, as a symbolic sacrifice of your prayers and petitions is entirely natural. 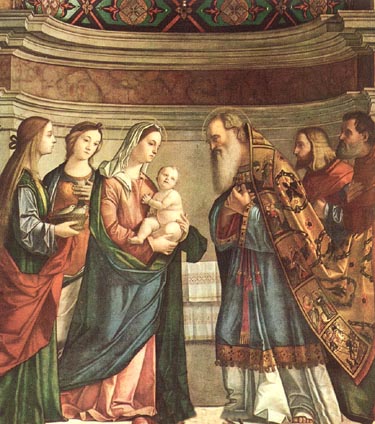 For Holy Mass on Candlemas we hear some splendid prayers.  Let’s look at a couple.

Here is the third of several prayers recited by the priest for the blessing of the candles.  In older days, the priest would be wearing a purple cope and would switch to white for Mass.  By the time of the 1962 Missale Romanum all the rites are in white.

O Lord Jesus Christ, the true Light who enlightenest every man that cometh into this world: pour forth Thy blessing + upon these candles, and sanctify + them with the light of Thy grace, and mercifully grant, that as these lights enkindled with visible fire dispel the darkness of night, so our hearts illumined by invisible fire, that is, by the splendor of the Holy Spirit, may be free from the blindness of all vice, that the eye of our mind being cleansed, we may be able to discern what is pleasing to Thee and profitable to our salvation; so that after the perilous darkness of this life we may deserve to attain to neverfailing light: through Thee, O Christ Jesus, Savior of the world, who in the perfect Trinity, livest and reignest, God, world without end. There is an adage that sin makes you stupid. Note the connection between vice and blindness and darkness.  The visible fire is not just a symbol of the indwelling of the Holy Spirit.  It also signifies life properly lived, a fact seen by others.

At the beginning of the procession an wonderful antiphon is sung.  Remember the Gospel.  Mary would have been brought within, carrying the Lord, the Light of the World, and led to a place of sacrifice, the offering of her Firstborn.  In the Churching of woman after child birth, they are met a the entrance to the church and then led forward.

Adorn thy bridal-chamber, O Sion, and welcome Christ the King: with loving embrace greet Mary who is the very gate of heaven; for she bringeth to thee the glorious King of the new light: remaining ever a Virgin yet she bearest in her arms the Son begotten before the day-star: even the Child, whom Simeon taking into his arms, declared to the peoples to be the Lord of life and death, and the Savior of the world.

At Christmas we receive the Lord.  At Candlemas we offer Him.

In addition to the theme of light functioning throughout the rite there is also another echo of Christmas and Epiphany.  God meets man.  God comes to us, and we go to Him.  Today there is another meeting of God and man, expectant man, symbolized by Anna and Simeon.  The hymn sung in the procession frames our meeting, our Encounter as the liturgy of the Greek East calls this say, in nuptial terms.

In the Mass itself, we have the This is an ancient prayer, going back at least to the 9th c. and is found Liber sacramentorum Romanae ecclesiae ordine excarpsus.

You will see what is happening quickly, if you are a student of Latin, by taking careful note of the ut in the second part, which leads to a subjunctive down the line.  Also, there is a typical sicut…ita constuction, the ita part having the subjunctive result of the ut.  There is a nice turn of phrase at the end, using a trop hyperbaton, whereby that tibi separates the two elements of the ablative absolute purificatis … mentibus.  I also like that use of praesentatus… praesentari, a trope called, if memory serves, polyptoton.

The word maiestas is associated with gloria, a divine characteristic which transforms us who encounter it.  Thinks of the transformation of Moses’ face after he met with the Lord in the tent or on the mount: he had to wear a veil because his face was too bright to look at.  Also, Romans liked addressing people in indirect ways.  We still do this in some formal discourse and letters.  It is courtly, courteous.  Here maiestas can be heard as a form of address: Your Majesty.  So, maiestas has layers on layers of meaning.

Note the philosophical language of substantia.  Some times people will argue that the switch from Greek to Latin, the spoken language in ancient Rome, is justification for using the “vernacular” today.  The problem with that argument is that the Latin used in the Church for prayer, was not the language spoken by the people. It had technical vocabuary (e.g., maiestas, substantia) and turns of phrase nothing like everyday speech (e.g., hyberbaton, polyptoton).

See what happens?  It all seems straight forward.  Then you start to drill.

Candlemas is a beautiful feast full of meaning and symbols.

Holy Church puts candles in your hands today, to remind you of your gifts and your duties.

Fr. Z is the guy who runs this blog. o{]:¬)
View all posts by Fr. John Zuhlsdorf →
This entry was posted in Liturgy Science Theatre 3000, Our Catholic Identity and tagged 40, Candlemass, candles, churching, Nunc dimittis, Presentation of the Lord, purification, Simeon. Bookmark the permalink.