Once upon a time, there was this Pope who was “corrected”…. 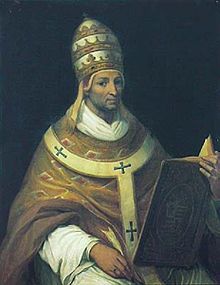 In the wake of the confused and confusing elements in Chapter 8 of Amoris laetitia and in light of the Five Dubia submitted by the Four Cardinals, and in view of the remarks made by Card. Burke about what would possibly need to be done were no responses given or further confused and confusing points be issued, some people have wondered what it takes to “correct” a Pope, or if “correction” is even possible.

How would such a thing happen, given the fact that the Pope has as his superior only Christ, whose vicar he is, and … the People of God, whose servant he is.

I saw a really interesting piece at EWTN (UK) about correction of an erring Pope.  It gets into an historical incident.  I hadn’t read about this for quite some time, so it was interesting to refresh my memory. Let’s see some of it with my emphases and comments:

The Church corrected the serious error of Pope John XXII [An “Avignon Pope” who died in 1334.]

Pope John XXII’s serious error was in the area of eschatology, not moral theology, [Amoris laetitia concerns, mainly, moral theology] and in particular he proposed his own idea that after death the righteous soul did not immediately enjoy the reward of the Beatific Vision. Instead, he favoured the novel idea that the soul waited until the resurrection of the body, and the final, universal judgement to enjoy the beatific vision of God.  [Novel ideas are, generally, bad ideas.] Pope John XXII’s speculative proposition is against the established and continuous teaching of the Church, as now expressed in the Catechism of the Church as follows:

Each man receives his eternal retribution in his immortal soul at the very moment of his death, in a particular judgment that refers his life to Christ: either entrance into the blessedness of heaven — through a purification or immediately, or immediate and everlasting damnation. (CCC 1022).

Eight years into his pontificate, disturbing rumours began to circulate in Europe’s universities and throughout the Church that Pope John XXII was ‘favouring’ a serious error contrary to the teaching of the Church. By November 1331 these rumours transformed into alarm following John XXII’s delivery of three homilies proposing that his new teaching was supported by a ‘reading’ of Scripture and the Church Fathers.  [It’s one thing to have ideas.  It’s another thing to diffuse them.] The Catholic world outside of the papal court of Avignon was profoundly and deeply disturbed by the news that the Head of the Church was proposing a teaching contrary to magisterial teaching. However, the pope’s novel ideas found favour among some within his court who sought the Holy Father’s patronage and preferment.  [Say it ain’t so!  Surely no one in a Pope’s close circle would ever seek to curry favor by nodding and bobbing over everything.  Such ambition would be wicked.]

Faced with growing protests from clergy throughout Christendom Pope John XXII sought to defend his innovation in two ways: he claimed it was not his own teaching but the teaching of scripture and the Church Fathers and he asserted that it was only his private opinion as a theologian, and not taught in his role as Head of the Church. The pope further claimed that the question was open to discussion and every clergyman was free to accept or reject whichever side of the controversy he judged as true.

However, the Holy Father’s actions belied his words. Pope John XXII’s treatment of supporters and opponents showed his preference for those who upheld his “new” teaching. Supporters received honours and preferment, while those who opposed Pope John XXII, either informally or formally, experienced papal disfavour, and even punishment. He also sought to disseminate his erroneous teaching by commanding that copies of his sermons were distributed to his supporters.  [So, those who resisted, were punished and John continued to diffuse his idea.]

But the more Pope John XXII and his supporters sought to promulgate his error, the greater the uproar and resistance from the Church beyond the papal court. [NB: This was loooong before the age of social communication, whihc makes information now rocket around the globe to a far larger percentage of the population that would have been involved in the 14 c.  That said, in the ancient Church, there were riots when people heard a version of Scripture that was unfamiliar.  People argued about homoousios and homoiousios in the market places and streets.  Maybe a larger percentage were involved because they took their faith seriously.] King Phillip VI of  France and the Dominican faculty of the university of Paris were Pope John XXII’s most implacable opponents, despite the Holy Father’s personal rebukes and imposition of ‘yes’ men. As Fr. Victor Francis O’Daniel, O.P. put it, “Neither fear of feeling the weight of papal displeasure, nor hope of reward, had any influence… when there was question of an error against Catholic faith.”

Determined to meet the challenge of Pope John XXII’s error head on, King Philip VI called a meeting of the theological faculty of the University of Paris. [The “state” was involved, because these matters had civic repercussions.] On December 19, 1333 a commission of 23 masters of theology assembled under the presidency of the Dominican patriarch of Jerusalem, Peter de la Palud, and in the presence of the kings of France and Navarre, and many bishops, priests, and lay faithful. They unanimously declared their firm belief in established and continual Catholic teaching on the righteous soul’s immediate reward of the Beatific Vision on death and individual judgement. [They also diplomatically stated their submission to the Roman Pontiff and they declared that John had not formally taught the error which he had been diffusing.]

The commission drew up a profession of faith which they signed, and submitted to Pope John XXII. The profession of faith was accompanied with a letter to the Holy Father which was polite and respectful, but also expressed clearly and firmly the result of their deliberations. They reminded Pope John XXII that he had declared that he had spoken as an individual theologian, not as Head of the Church infallibly defining a doctrine. They also expressed the hope that the Holy Father would give his apostolic sanction to their decision.

Following his receipt of the signed profession of faith and letter Pope John XXII immediately convoked a consistory in January 1334 during which he displayed openness and tolerance towards those who opposed him, and repeated his assertion that he had never intended to dogmatically settle the question, but rather that he had sought an open discussion. [Thus saving everyone’s face.] He also sent letters admonishing those supporters that the King of France judged had overstepped the mark in their zeal to promote his “new” teaching, and he released from prison those opponents investigated by the Inquisition. [Today, there are all sorts of “prisons”.  Some even have bars on the doors.] Later in the year, sensing his death was imminent, John XXII retracted the serious error he had preached or had caused others to preach or teach that was not “in perfect conformity with Catholic belief.”

Blessed Cardinal Schuster OSB (Cardinal and Archbishop of Milan, d. 1954) wrote the following assessment of this formal correction of the serious error of Pope John XXII:

John XXII has the gravest responsibilities before the tribunal of history… since he offered the entire Church, the humiliating spectacle of the princes, clergy and universities steering the Pontiff onto the right path of Catholic theological tradition, and placing him in the very difficult situation of having to contradict himself.

It took a good deal of humility for John XXII to check and adjust his course.

What is especially of note is how human nature doesn’t change.

An interesting episode from our fascinating, messy family history!

Fr. Z is the guy who runs this blog. o{]:¬)
View all posts by Fr. John Zuhlsdorf →
This entry was posted in "How To..." - Practical Notes, Just Too Cool, Our Catholic Identity, The Drill and tagged John XXII. Bookmark the permalink.