The 21 Nov. 2017 editions of Rorate Caeli and Eponymous Flower both posted that Fr. Minutella is facing Double Excommunication by the Vatican. He is in a dispute over Amoris Laettia.

If you have time, can you explain what Double Excommunication is?

The priest in question, Fr. Alessandro Minutella belongs to the Archdiocese of Palermo in Sicily.  He has been the subject of negative TV coverage in Italy.  I watched a video he made and posted on YouTube.  He described with great passion his situation from his point of view.  [HERE – in Italian – I’ve seen a couple other videos, too.  He doesn’t mince words.]  However, that’s one side of a story which I am sure is very complicated.  I’m not saying I don’t believe what he said.  I simply don’t understand all the details well enough to say much more than … 2+2=4… not 5.

Fr. Minutella is really jammed up, and I’m pretty concerned for him.  I’m sure he could use lots of prayers.

That said… to the question:

There is no such thing as “double excommunication” as a technical term.  What this means is that two excommunications, for separate issues, would be declared.

However, all excommunications depend on certain conditions.

First, the offense committed must involve grave matter, must be a mortal sin, and it must be punishable by the censure of excommunication. There are not many of those offenses.

There is the possibility that some bad behavior not described in the few specific cases in Canon Law could be punishable by a “just penalty”, which could include even excommunication.  In those cases less severe censures are usually imposed first, with the hope that that will be enough to affect a change.  Such a case of a “just penalty” might include causing serious scandal or confusion by using social media or means of mass communication.  (Think pro-abortion politicians, etc.)

Again, there is a lot that I don’t know about the case of the priest in question, but it seems  that his case is discussed all over Italy, and not just in his diocese.  Thus, he has been told by the Congregation for Clergy and his archbishop, that he had to make some public, precise statements of fidelity and post them on social media and that if he didn’t he would incur two excommunications.  Fr. Minutella said he already did make declarations of fidelity in writing and that he wouldn’t do it again in the way they demanded.  I suspect that the censures were declared.

I don’t know what Fr. Minutella’s situation is right now.  The video that I saw was from a couple weeks ago.

Anyone who is excommunicated has the right to appeal.   If an excommunicated person makes an appeal to a higher authority (than the one who imposed the censure), then the excommunication is suspended while the process of the appeal is going on.

I hope that those involved can work this out justly and charitably, for the good of souls.

Please, Mary, Mother of the Church, Queen of the Clergy, intercede for all involved!

If you want to learn more about excommunication – one of the least understood points of the Church’s life – Ed Peters’ book is really helpful. 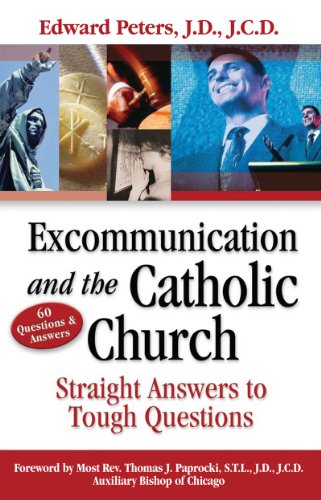 Fr. Z is the guy who runs this blog. o{]:¬)
View all posts by Fr. John Zuhlsdorf →
This entry was posted in "How To..." - Practical Notes, ASK FATHER Question Box, Canon Law, Hard-Identity Catholicism and tagged 2+2=5, Amoris Laetitia, excommunication, Fr. Alessandro Minutella, Our Lady of the Clergy. Bookmark the permalink.