I was, I believe, on Prince Edward Island when the news that Mother Theresa had died. When I heard of that the Princess of Wales had died I was in bar having something to eat in, I believe, Glace Bay of Cape Breton Island.  Little did I know that I would be involved with Ham Radio 20 years later.

In 1997 I helped to move a large boat from Halifax to Lake Superior, going around Cape Breton, to PEI, around the Gaspé Peninsula and down the St. Lawrence Seaway.  Of the group, I spoke some French so there were a couple times when, putting in for the night somewhere along those rugged coasts I bargained with some fisherman for fresh catches or we found the places that handled incoming sea critters, and we had great meals on the boat.   A couple times I shocked priests but stopping at their rectories and asking to say Mass.  They looked at me, bemused, as if I had three heads. There was one day of particularly dangerous water and wind and we had to find a cove or bay fast.  I learned additional respect for those who work on those waters.  For more than one reason, has Eternal Father Strong To Save long been one of those hymns that closes my throat. 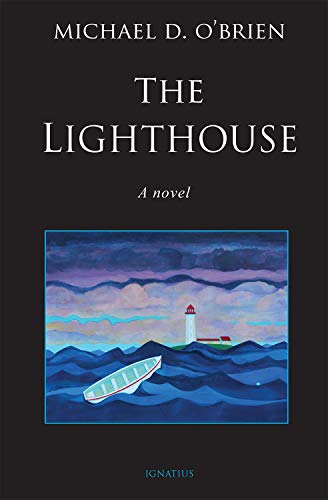 Once again, O’Brien explores the theme of fathers and sons, in our contemporary time of fragmented families.  The main character comes from a broken family and, due to the timely influence of a few good men in his childhood, manages to make it into adulthood as a good, upright man.  By fate he winds up working at a lighthouse off the coast of Cape Breton for the old keeper, whom he eventually replaces, thus beginning physically a his interiorly solitary life.

The theme of solitude, and the eventual opening up of his world through seemingly random contacts with people who come to his tiny rock island, is especially poignant right now, in this time of COVID-1984.  O’Brien has a mystical streak.  Perhaps he sensed it coming and wrote a book to help people with their isolation.

O’Brien’s books are profoundly Catholic, though Catholic stuff is often not obviously at play.  There are constant leitmotifs of grace, sacrifice, and redemption throughout, taking more or less subtle turns.  In The Lighthouse you sense early on the inexorable end, but he also throws you some curves.

Also, I sense that O’Brien may have found an editor!  Some of his earlier works were really long, very much in need of trimming.  This work was compact, selective, without being hasty.  O’Brien carefully tied up all his loose ends by the time we arrive at the finish. Even seemingly minor characters are revealed to have played part that loom with significance before the last page is turned.

I read it in one go.  I didn’t want to stop.  And I was content at the conclusion, as the main character would be content with the ending of a season, or the carving of a wood figure, and the beginning of something else.

This is a peaceful book even though it works through inner turmoils.

Reading The Lighthouse drove me to look at some maps online, and photos, of Cape Breton.  I tried to spot some things from that excursion in 1997.  I found a few.  O’Brien says that his lighthouse and the nearby port are fictional.  I wonder, however, if perhaps he wasn’t a little influenced by the fact of Les Îles-de-la-Madeleine with its tiny town of Fatima.

Oh yes… my Kindle died in the last chapter.

Fr. Z is the guy who runs this blog. o{]:¬)
View all posts by Fr. John Zuhlsdorf →
This entry was posted in REVIEWS and tagged Michael D. O'Brien. Bookmark the permalink.