8 November is the second of the double transits of Mercury across the face of the Sun. 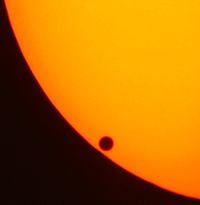 Here is a map for visibility. Try to find some way to see it.

This is a very cool event. After the last pair of transits, in 1882, the great bandmaster John Philip Sousa wrote a march in honor of occurence aptly, if not creativly, entitled "The Transit of Mercury". Listen to it here! It is quite jaunty.

The last time it happened it was visible in Rome in May of 2003. I was coming out of the Holy See Press Office and ran into various folks with their telescopes set up just outside. The police had driven them from St. Peter’s Square because tripods are not allowed. Anyway, they were letting anyone who walked by look through their telescopes as Mercury passed across the face of the Sun. The cops were there too, all too delighted to look, but just not from the square.

Among the group were a couple of Irish high school student at a Jesuit school who had the expensive hobby of eclipse chasing. Sunny Italy was considered a better bet than Ireland at that time of year, so they hopped on Ryan Air. They had a very nice set up and a big sign so people knew they could have a gander at the celestial event. I was amazed at the videos they showed me on a laptop of various eclipses they had seen including one over Antarctica from an airplane.

The Fathers and other great writers believed that God placed the heavenly spheres in the charge of angels to guide their movements. Since angels knew God’s will, some thought that by watching the heavens we too could decipher something of God’s will.

Anyway, the transits are very cool.  Sometimes they also coincide with other transits, with Venus, for example, but they are pretty rare.  Mercury and Venus will not transit at the same time until the year 69163 and then again in 224508.  As I said, pretty rare.  I don’t know what God has planned, but perhaps He’ll have a different setup for us by then.  The coincidence of a occurrence of a solar eclipse and a transit of Mercury will be on 5 July 6757.  Book your flight to Eastern Siberia, because that’s where it will be visible.

May we never tire of watching the signs of the times.