By all accounts there were over 1 million people at St. John Lateran for the traditional values "Family Day" gathering.  Some say as many as 1.7 million arrived, though it is nearly impossible to number an amorphous crowd which stretched far down the side streets.  On the other hand, the press did its best to prop up the tired lefties in their protest rally at the P.za Navona, puffing their numbers from the few hundreds I saw with my own eyes to tens of thousands.

The massive success of "Family Day" at the Lateran shows that traditional Catholic values still reign in Italy.  An informal poll in a rather lefty paper showed support of "Family Day" by 72%.

"Family Day"’s success goes way beyond the issue of family value versus same-sex unions.  It demonstrates that Catholic and conservative laity can organize and mobilize far greater numbers of just plain folks than the intelligentia and press would have us believe.

Across town I listened to one speaker after another hysterically shriek that Italian TV was unfairly giving more coverage to "Family Day" than to them.

The success of "Family Day" also highlights a now deeply entrenched trend not only in Italy, but in the West: the marginalization of the Church from the public square.  Nearly everywhere the Church is being denied its right to speak freely.  Committed Catholic and other religious politicians and public figures are pressured never to make reference to their religious convictions.  The constant mantra is that religion should be a purely private matter that has no influence on public policy.  Be religious, fine.  But you may never act outwardly on your interior opinions.

In Rome the public v. private conflict was visible in the conflicting remarks of former P.M. Silvio Berlusconi and those of the present P.M. Romano Prodi over "Family Day".

Berlusconi, was not originally going to come to the pro-family demonstration.  He is sometimes the target of criticism about "coherence" since his marriage situation is not in plumb with the Church’s law.  He says that when he saw an anti-Catholic cartoon about "Family Day" in the Communist Il Manifesto, he changed his mind.  Berlusconi spoke "papale papale" as the Romans say (my translation):

"Left-wing Catholics are a insurmountable contradiction.  You cannot be at the same time Catholics – and as such considerate of the doctrine of the Church and its teachings on various questions – and then stand with those who cheek by jowl on the other side." 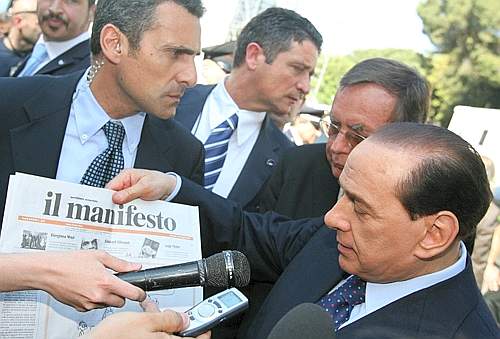 He went on, "In these recent times there is an attack on the freedom of the Church to express its own convictions.  There comes to my mind what happened in the Communist countries, the Church of silence that could speak only within the ambit of its own buildings."

The present P.M., Romano Prodi, who had found another appointment yesterday, in Stuttgart, Germany, responded to Berlusconi’s remarks.  He took the usual tack of Catholic pols who have been pressured into the separation of private faith from the public square: he waffled.

"Being Catholic or not is a serious thing and involves a personal decision and interpretation of society; speeches of this sort are entirely foreign to the Catholic spirit.  Completely foreign."  He told Radio24, "The family is an topic of great importance like, of course, that of religion, which I have lived always and I live now in a strictly reserved way".  He even quoted the lapidary speech JFK made in Dallas during the electoral campaign when he caved in on his faith.  The real importance of that speech lay not in whether or not a politician could be both Catholic and a faithful defender of the Constitution.  The real impact was that it provided a model for Catholic politicians to bury their faith so deeply in the "private" sphere, that it had virtually no impact on their actions as politicians.

And so it has been ever after.

Prodi is now trying to paint the groups involved in the public debate over traditional family values as if they were the Guelphs and Ghibellines who tore Italy apart for hundreds of years.

Meanwhile, Berlusconi is not the only one speaking "papale papale" about what it is to belong to be Catholic.

In Brazil the Holy Father made a powerful case for membership in the Church:

The Pope therefore wants to say to all of you: The Church is our home! This is our home! In the Catholic Church we find all that is good, all that gives grounds for security and consolation! Anyone who accepts Christ, "the way, the truth and the life" in his totality, is assured of peace and happiness, in this life and in the next! For this reason, the Pope has come here to pray and to bear witness with you all: It is worth being faithful, it is worth persevering in our faith!  The coherence of the faith also requires, however, a solid doctrinal and spiritual formation, which thus contributes to building a more just, humane and Christian society.