Today was "Family Day" in Rome and it was a huge, vast, mind-blowing success.  It was lay organized and attended.

It would have been a success, according to the organizers, had over 100,000 people come to St. John Lateran for the event.

The last report I heard was that over 1.7 MILLION people showed up.

The importance of this event is not merely that when left to their own devices the Italian people will support traditional values in great numbers, giving the lie to the script presented by the intellectuals in the press.  It also means in concrete terms that the traditional values laity can organize and achieve results.

On the other hand, at P.za Navona was the "counter-demonstration" manifestly in favor of same sex marriages and civil unions etc.  What it really was about was hatred of the Catholic Church.

NB: The Italian bishops said that this "Family Day" was to be entirely lay run and attended, though priests were not forbidden to go.

I went down to the P.za Navona to see what the enemy was doing.  It is nearly under my window, so I don’t have to leave my room to hear what they were whining about.

I mean whine too. 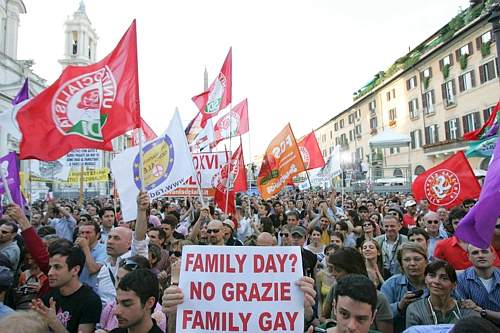 There were maybe, maybe a thousand people there. squeezed into about 1/4 of the piazza, in front of a huge stage where someone is perpetually literally screaming into a microphone.  When I arrived they were whining that RAI 1 and 2 (Italian television) were not giving their demonstration as much air time.

All around were "the element" sporting new USSR shirts and images of things no one should have to see.  Many of them looked like they needed detox… and lots of hospital care.  I think I don’t need to go into detail.

The Italian press says some 20,000 showed at P.za Navona.  B as is B! S as in S!!!!  Folks reporting back to me all day said they thought there were maybe hundreds, maybe a thousand, maybe two, depending on the time of day.  If all day they had 20k go through turnstiles I would be surprised.

In any event these xxxxx xxxxxxxx are going to be below my window till midnight.

On the other side of town however….