Catholic Herald: Alcuin Reid on what the Pope is doing with ad orientem worship

The Catholic Herald has been busy.  In addition to their piece on a new generation of solid and clear Catholics and liturgical reform and another item on Summorum Pontificum there is also an op-ed by Alcuin Reid, a very sensible fellow, about ad orientem worship.

Benedict XVI leads the faithful in ‘looking together at the Lord’

"What matters is looking together at the Lord." These words, written eight years ago by Joseph Cardinal Ratzinger, explain a subtle but decisive liturgical reform being enacted through the personal example of Pope Benedict XVI.  [The premise here is that Benedict is actually carrying out a reform, which is no doubt correct.  Also, the very idea and the word "decisive" means he has a plan.  As I have written elsewhere, the most important dimension of Pope Benedict’s vision, his "Marshall Plan" for reinvigorating the Church from within and ad extra is liturgy.  Liturgy is the tip of the spear.]

The latest and perhaps most striking step in this reform took place on the Feast of the Baptism of the Lord when, as has become customary, the Pope celebrated Mass in the Sistine Chapel and baptised newborn infants. As papal ceremonial goes, this is not usually a grand liturgical occasion: the Mass is in the vernacular and is largely said, not sung.

Yet it was precisely there – in perhaps as close to a parish setting as papal ceremonies often get [Ah, well done Alcuin.  I missed that point and it is very good.  The intimacy of the Sistine, and the occasion (baptizing babies of Vatican employees) was almost like a "parish" event.  Just as the Holy Father uses the Basilica to teach bishops how it is to be done, he used the chapel to teach parish priests?  An intriguing idea.  Well done.]– that the Holy Father chose to make a significant liturgical adjustment. Instead of celebrating the liturgy of the Eucharist at a temporary altar-table set up for the occasion that would have had him "facing the people" (as has often been done in recent years), at the preparation of the gifts Pope Benedict went up to the original altar of the Sistine chapel (which stands against the wall on which Michelangelo painted his Last Judgement) and celebrated "facing East" or "towards the Lord" as it were. The Pope faced in the same direction as all those present – towards the liturgical "East", towards the cross – in continuity with popes (including Pope John Paul II) and generations of the faithful before him.  [You all might have read the CNS article about ad orientem worship in which long time assistant MC Msgr. Vigano opined that the point was not that the Pope was at the main altar, and therefore everyone was facing the same direction, but that everyone was facing the Cross together.  So, one concludes after listening to Vigano, it would be better to for priest and people to be facing the Cross together, but with the Cross between them.  Ratzinger allowed for this option as clearly better than simple versus populum worship, but only as a stop gap, or transition to something better, true ad orientem worship toward the liturgical East where the Cross is.]

Let us be clear, this has nothing at all to do with the Pope’s decision that the more ancient rite of the Mass (in Latin) be

available to those who wish it. No, this Mass was according to the modern Missal of Paul VI, in Italian. [I not sure this has "nothing" to do with the older Mass being derestricted.  I think they are all of a piece.  But I will stipulate.]  And that is why this occasion was so important. For in this silent gesture Pope Benedict stated once and for all that there is nothing at all wrong with using the older altars in our churches. For as he wrote in his preface to Fr Michael Lang’s book Turning Towards the Lord: "there is nothing in the [Second Vatican] Council text about turning altars towards the people."

The Holy Father’s example is not an isolated one. In his book The Spirit of the Liturgy Cardinal Ratzinger wrote "facing toward the East…was linked with the "sign of the Son of Man", with the Cross, which announces Our Lord’s Second Coming. That is why, very early on, the East was linked with the sign of the cross." And, recognising that in many places, altars "facing the people" have been set up (sometimes as the result of costly and unnecessary reordering) that make a return to celebrating the liturgy of the Eucharist facing East difficult. "Where a direct common turning toward the East is not possible, [IS NOT POSSIBLE…  This is my point, above.  Reid has quoted exactly the correct text.] the cross can serve as the interior ‘East’ of faith. It should stand in the middle of the altar and be the common point of focus for both priest and praying community."

This is what Pope Benedict has done: the cross is now at the centre of the papal altar in St Peter’s Basilica (which faces East in any case), as well as at the freestanding modern altar behind it that replaced the old altar of the Chair. [Where the Pope has also been showing Bishops what to do.] He has even adopted this rule when celebrating outside the Vatican – as seen in his Advent Mass in the thoroughly modern chapel at the Knights of Malta hospital in Rome .

Here in England those few priests with the courage to take Cardinal Ratzinger’s words seriously and return to the use of what we call "the high altar" in their churches have been misunderstood or even ridiculed by clergy and laity. Some have been upbraided for doing so by their superiors.  [I have personal experience of this.  I had the temerity once to use the altar in the correct direction at a place I was, and the price was costly.  The church had been built at the time of the liturgical reforms, so it was still liturgically correct insofar as the altar was concerned.  It was a free standing table altar, but the altar stone was embedded on the congregation’s side, not the side below the massive and beautiful Crucifix (above the tabernacle in the center) which dominated the Sanctuary.  Clearly one could physically use that altar from either side, but it was intended to be used ad orientem, toward the Crufifix and the tabernacle.  Most people loved it, many barely cared, and a few aging hippies freaked out and cause me enduring pain as a result.  But I digress…]

This is undoubtedly due to the erroneous impression that "facing the people" is a mandatory part of the modern liturgy. [But that is fading, I believe.] Well, now the Holy Father – in his customarily humble way – has definitively shown us that it is not. Indeed, he has shown us that facing East where that is all that is possible, or indeed facing the cross – which is possible everywhere, [Well said.] can and ought to be very much a part of the modern liturgy, for "a common turning to the East during the Eucharistic Prayer remains essential. This is not a case of accidentals, but of essentials. Looking at the priest has no importance. [Amen.] What matters is looking together at the Lord."

Well done, Alcuin.  I hope to see you somewhere in the UK in February.

And here is a plug for your book. 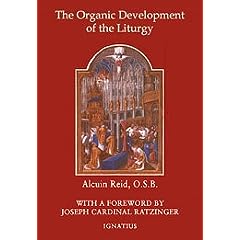