Here is an excerpt of the article I wrote for the print version of WDTPRS about Laetare Sunday.   This year, in the print version, we are focusing on the Extraordinary Form of Mass rather than the Novus Ordo as we have for the last 7 years: Today is known by the first word of the first chant of Mass, the Introit, in this case, “Laetare … Rejoice”!  This is one of two days of the year we use rose (rosacea) colored vestments and the only day during Lent when we can use instrumental music.  On Laetare Sunday we momentarily relax the penitential character of Lenten Sundays.  Traditionally during Lent, and still by the Novus Ordo rubrics, there should be no flowers, decorations, or instrumental music (organ should be used only to support congregational singing).  Today this can be relaxed.  The tradition of rosacea vestments grows from the history of the Roman Stations.   The Station church today is the Basilica of the Holy Cross of Jerusalem, where the Emperor Constantine’s mother St. Helena placed relics of Cross and Passion brought back to Rome from Jerusalem.  At this basilica on this day, Popes blessed roses made of gold to be sent to Catholic monarchs and distinguished sons and daughters of Holy Mother Church.  Therefore Laetare was also nicknamed Dominica de rosa…. Sunday of the Rose.  This is how rose-colored vestments developed for that church on this Sunday.  The color spread to the rest of Rome, and then spilled over to the corresponding Sunday in Advent, Gaudete.  Rosacea was diffused to the whole world with the promulgation of the Missale Romanum by St. Pope Pius V in 1570.

Pope Innocent III (+1216) wrote about the significance of the rose and Laetare Sunday: “As Laetare Sunday, the day set apart for the function, represents love after hate, joy after sorrow, and fullness after hunger, so does the rose designate by its color, odor, and taste, love, joy, and satiety respectively.”  Innocent says the rose is the flower spoken of in Isaiah 11:1: “there shall come forth a rod out of the root of Jesse, and a flower shall rise up out of his root”.  Pope Leo XIII (+1903) wrote that the beautiful golden flower signifies Christ in His majesty, spoken of by the prophet as “the flower of the field and the lily of the valleys”; the flower’s fragrance shows the sweet odor of Christ which should be diffused through the whole world by His faithful followers. The thorns and red color symbolize 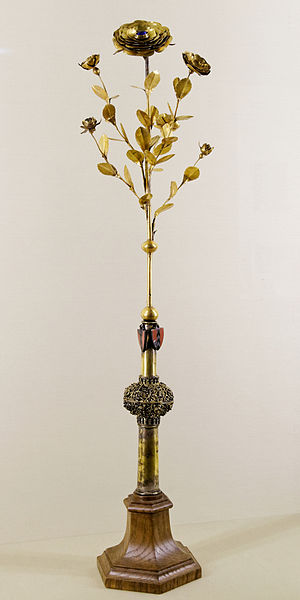 His Passion, harkening to both the real event of the Crucifixion and its foretelling by the prophet Isaiah 43:2: “Why then is thy apparel red, and thy garments like theirs that tread in the winepress?”

These themes are in the prayer the Popes used to bless the golden roses. The rose, then, connects not only the penance we do in honor of the Passion (Lent) but also the joy of the resurrection (Easter). It points to Christ who reigns as King, but from a wooden Cross.

Rosacea vestments are making a comeback.  It was once impossible, for example, to buy new rose vestments.  Now, church supply stores around the world have good selections.  Changes in attitudes about our beautiful Roman liturgical tradition are unerringly reflected in the marketplace: demand calls forth supply.

Today’s prayers and antiphons focus on Jerusalem and on joy.  Psalm 121 (122), one of the “gradual canticles”, songs of pilgrimage to Jerusalem, dominates the Mass: “I rejoiced (laetatus sum) at the things that were said to me: we shall go into the house of the Lord”.  Keep before your eyes the image of catechumens preparing for baptism at the Vigil of Easter.  They have experienced the scrutinies, the toughest of which would have been during this last week.  They were exorcized last Sunday the Basilica of St. Lawrence. They are now drawing close to entering the safe-haven, the Jerusalem which is Holy Church. Today’s Station, the Basilica of the Holy Cross in Jerusalem, with its relics of the Passion, was symbolically Jerusalem for the Romans, and therefore a symbol of the heavenly Jerusalem for which we all long.

According to very ancient Roman tradition, serious penance and fasting did not begin until Monday of the third week before Easter (the day after this Sunday).  Thus, Laetare was the last day before the period of strict discipline. It was not until later that Lent was lengthened to forty days, making a Tuesday into “Mardi Gras” literally in French “Fat Tuesday”, the day people had to use up the animal fats in their houses.  Laetare is therefore a refreshment stop on the pilgrimage toward Easter: think of water-stations along the route of a Marathon race.  Together with the joy of approaching Easter, this Sunday is about the heavenly Jerusalem we long for, which is anticipated in the Church and the Most Holy Eucharist.  Moses is also an important figure in today’s Mass.  He obtained manna from God for the People in the wilderness on their journey to the Promised Land.  Eucharist and journey. Joy and Jerusalem.

Let’s move now to the prayers for the 4th Sunday of Lent.

The splendiferous Lewis & Short Dictionary says, under the lemma mereo, that meritum is a noun for “that by which one deserves any thing of another”, which can thus mean, negatively, “demerit, blame, fault”.  Respiro is “to fetch one’s breath again, to recover breath; to recover, revive, be relieved or refreshed  after any thing difficult”.

LITERAL VERSION:
Grant, we beseech You, almighty God:
that we who are being afflicted because of the blamefulness of our acting,
may revive by consolation of Your grace.

Ancient Roman prayers are courtly, elegant.  They turn divine characteristics, such as glory and grace, into forms of address, like “tua gratia”.  In England people address Cardinals as “Your Grace”.   Latin gratia concerns “favor”, the kindness extended to us or the thanks we return (gratias agere).   Conceptually it also has, like meritum, an undertone of recompense.   “Grace” in the Christian view is something God is in no way compelled to give: it is free gift.

Look also at actio (from ago, agere) which is “a doing, an acting” and especially, “public functions, civil acts, proceedings, or duties”.  At the heart of the Church’s Eucharist liturgy is the actio, the Roman Canon.  Christ is the true Actor in the actio.  By baptism we participate actively in the Actor’s actio by receiving what He freely gives.  By the merits of our own actio we are justly afflicted.  By the merit of Christ’s actio we are saved.

I also like that respiremus, “may we catch our breath”.  I have the image of someone at the end of the long pilgrimage, maybe to the heavenly Jerusalem, who finally and has attained relief… who finally can rest.

Our Secret is an ancient prayer from the Gelasian Sacramentary, surprisingly among prayers for Advent.  It is straightforward.

Daily Liturgical Missal (Baronius Press):
Look favourably upon these present Sacrifices,
we beseech Thee, O Lord,
that they may profit us unto both devotion and salvation.

The final prayer for Mass survived in the Novus Ordo for Saturday of the Third Week of Lent.  It is an ancient prayer, found in the Gelasian Sacramentary on the fifth feria of Holy Week, Holy Thursday, for the Chrism Mass.

In the eternal angelic hymn, the trisagion, God is “Sanctus, Sanctus, Sanctus”.  What is of God is sanctum.  The neuter plural sancta, literally “holy things”, are identified by the liturgical dictionary we call Blaise/Dumas as the Eucharistic species or, at this point in Mass, the Eucharistic offerings upon the altar.  Expleo is at the same time “to full up” and also “to fulfill”.  Tracto is first of all “to draw violently, to drag” but then, “to treat, use, or conduct one’s self towards a person in any manner”, and in an intellectual sense, “to handle, treat, investigate, discuss any thing, mentally, orally, or in writing”. For St. Augustine of Hippo (+430), a tractator divinarum scripturarum, an “investigator of Scriptures”, was a way of describing a “theologian”.  Obsequium is “compliance in love, yielding, consent; obedience, allegiance”.  The Second Vatican Council document Lumen gentium, 25 states that Catholics must accept the Church’s ordinary and extraordinary Magisterium with “loving religious submission (religiosum obsequium) of mind and will”.  Sumo is “to take, lay hold of” and “to take as one’s own” and “to take for some purpose, i.e. to use, apply, employ, spend, consume”.  It has a technical meaning in ancient rhetoric.  In an oration, disputation, etc. sumo is “to take for certain or for granted, to assume, maintain, suppose, affirm”.

Daily Liturgical Missal (Baronius Press):
We are constantly filled with Thy holy Mysteries, O merciful God:
grant, we beseech Thee,
that we may celebrated them with sincere homage
and always receive them with steady faith.

I like the Baronius Press hand missal, but I don’t like this translation. We can drill more deeply into it with a

LITERAL VERSION:
Grant us, we implore You, O merciful God:
that we may treat with acts of sincere loving compliance Your holy things,
by which we are ceaselessly fulfilled:
and we may assume them always with a faithful mind.

I find the conceptual link between tracto and sumo fascinating.  Note that the highly complex mens, in addition to meaning “the mind, disposition; the heart, soul” can be “plan, purpose, intention, design”.  Consider now how we might “treat” (“mentally investigate”), what we “consume” or “assume” in Communion, with an “intention” or “purpose”, our heart, will and mind (mens), the sancta… mysteries holy things.  We can hear this prayer as an expression of our whole person being filled and satisfied by consumption of the Eucharist.  We can hear it as a radical interior adherence by a complete loving submission to the holy things we have encountered to a reality so transcendent that its draws from us the application of our intellect in an ongoing, super-fulfilling dialogue with Christ in the Eucharist.