Fr. Z agrees with Bishop Fellay’s comments in an interview

Our Johnny-On-The-Spot friends at Rorate have an English version of an interview with SSPX Bishop and Superior Bernard Fellay.  Here is a part. 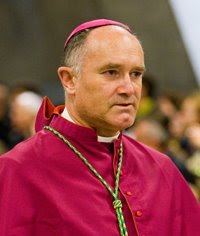 – Do you condemn the negationist declarations of Bishop Williamson?

– [Fellay:] It does not belong to me to condemn them. I do not have the competence for his. But I deplore that a Bishop may have given the impression of involving the Fraternity with a view that is not ours.

– In your letter to the faithful of January 24 [PDF], you display your desire to examine, with Rome, the deeper causes of the "unprecedented crisis which afflicts the Church today". What are these causes?

– [Fellay:] In the essence, this crisis is caused by a new approach to the world, a new view of man, that is, an anthropocentrism which consists of an exaltation of man and a forgetfulness of God. The arrival of modern philosophies, with their less precise language, has led to confusion in theology.

– [Fellay:] The quest for unity of all in the Mystical Body of the Church is our dearest desire. Nonetheless, the method that is used is not appropriate. Today, there is such a focus on the points which unite us to other Christian confessions that those which separate us are forgotten. We believe that those who have left the Catholic Church, that is, the Orthodox and the Protestants, should come back to it. We conceive ecumenism as a return to the unity of Truth.

Regarding religious liberty, it is necessary to distinguish two situations: the religious liberty of the person, and the relations between Church and State. Religious liberty implies liberty of conscience. We agree with the fact that there is not a right to force anyone to accept a religion. As for our reflection on the relations between Church and State, it is based on the principle of tolerance. It seems clear to us that there where there are multiple religions, the State should be watchful of their good coexistence and peace. Nevertheless, there is but one religion that is true, and the others are not. But we tolerate this situation for the good of all.

I agree with what he said.

Go read the rest at Rorate and spike their stats a bit!  Tell ‘m Fr. Z sent ya!

Fr. Z is the guy who runs this blog. o{]:¬)
View all posts by Fr. John Zuhlsdorf →
This entry was posted in Brick by Brick, SESSIUNCULA. Bookmark the permalink.

62 Responses to Fr. Z agrees with Bishop Fellay’s comments in an interview