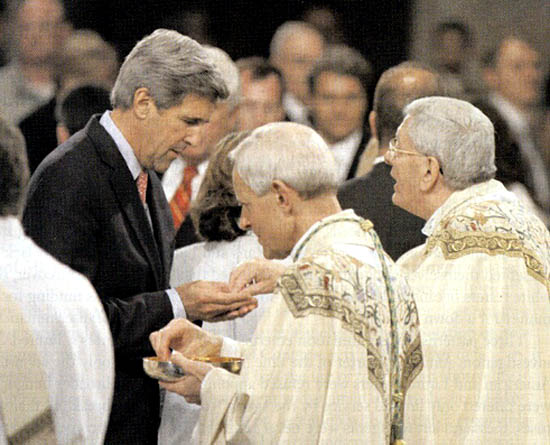 I have gotten some e-mail about the question sent me about the man who, at the Communion rail during a TLM, stood insisting to the priest that he be given Communion in the hand.

Originally I had the combox open on that entry.  I closed it when people started chiming in about the location of the place and the identity of those involved.

I want to make it clear that I did not know where those events occurred or who was involved.  I also did not want for any of that to be known.  That is why I closed the combox and removed the comments.

Still, mail about that entry has continued, from priests and laypeople.

In all the time I’ve been reading your blog, I have never been as surprised as I was by your comments regarding receiving on the hand at a TLM.

Say the Black, Do the Red.  The rubrics call for reception on the tongue. Yes, the priest can handle it differently, but giving in the hand is a violation of the rubrics.

Yes, the Church currently allows reception on the hand in the US, (but not in other places, like the Phillipines). But it also allows for the vernacular, the priest facing away from God, lay readers and EMC, etc etc….

I live in an area where there is some sad and regrettable hybridization occurring. Where I come out of the TLM and I think I may have perhaps just attended a Mass closer to the NO than the TLM.   Anything we can do to prevent this is worthwhile.     We must never forget how destructive Communion in the hand is to our Belief in the True Presence of the Most Blessed Sacrament of the Altar . As a former EMC, I can attest to this firsthand.

First, the writers says "The rubrics call for reception on the tongue."

No.  The rubrics do not say this.  The rubrics in the Missal do not describe how Communion is to be distributed.  Moreover, the rules guiding the "who, where and when" for Communion were laid out in the old 1917 Code of Canon Law, cc. 845-869.  Nothing in those canons prescribes Communion on the tongue.  In any event, the 1917 Code is no longer in force.  The 1983 Code is in force now for the Latin Church.

Placing Communion directly on the tongue comes from the sound theological conviction that only consecrated hands (those of a priest) should touch the Most Holy Eucharist.  It didn’t have to be laid out in the rubrics that Communion had to be on the tongue.  It was otherwise pretty much unthinkable.

That shows how far we have strayed, I suppose.

Anyway… if you say that Communion on the tongue is in the "rubrics", I would ask you to send me the exact text so that I can correct my error.  Good luck.

Second, the writer offered "the Church currently allows reception on the hand in the US, (but not in other places…)"

Two things here.  Rome allowed conferences of bishops decide if Communion could be given in the hand.   I think the original concession was granted in a 1969 document called Memoriale Domini, … if memory serves.   Sadly, very few conferences have not subsequently permitted Communion in the hand.  That "not in other places" is really very few places, alas.

[92.] Although each of the faithful always has the right to receive Holy Communion on the tongue, at his choice, if any communicant should wish to receive the Sacrament in the hand, in areas where the Bishops’ Conference with the recognitio of the Apostolic See has given permission, the sacred host is to be administered to him or her. However, special care should be taken to ensure that the host is consumed by the communicant in the presence of the minister, so that no one goes away carrying the Eucharistic species in his hand. If there is a risk of profanation, then Holy Communion should not be given in the hand to the faithful.

Recapping: where permission has been given, then permission is given.  Dura lex sed lex, I guess.  I hope permission will be withdrawn.  Until it is, people have the right to receive in the hand unless there is risk of profanation.

You can (should?) argue that any Communion in the hand is a profanation.  That seems not to be the mind of the Legislator at the moment, even though we see that the Legislator does not ever distribute Communion at his Masses unless it is directly on the tongue.  Mixed signals? Sure.  And they are signals which do not favor Communion in the hand!  But the law stands and it was repeated in Redemptionis Sacramentum.

The point is this: In those places where Communion in the hand is permitted, unless there is a compelling reason, it should not be denied to people who want to receive in the hand.

In the e-mail question I had received, there were indications that the person may have been trying to make a protest of some sort.  If that is the case, the real question is should he be given Communion at all, much less on the hand.  But that is the stuff of another entry.

Thirdly, cases of hybridization going on doesn’t change the law about Communion in the hand.

As a matter of fact, hybridization goes both ways, doesn’t it.  Think about those places where things which were suppressed by 1962 are still being done.  That is another kind of hybridization.

Anyway, I understand the argument that Communion in the hand is just another thing that chips away at a traditional expression of our Catholic faith.  I understand that argument and I agree with it.

Is avoid hybridization a compelling reason to refuse to distribute Communion in the hand?  I don’t know.  My inclination is to say no, that’s not a good enough reason.

That is why we need catechesis and an eventually change in the law.  Law and practice should come to reflect a better understanding of the encounter with mystery at the core of each act of getting involved with the Eucharist at whatever level.

If we want the Church’s laws to be upheld by others, we should uphold them for others.

Let’s work through good example, persuasion, preaching, catechesis, civil discussion to end Communion in the hand voluntarily by as many people as possible. Law will follow, slowly but surely.

And that’s all from Fr. Z for the moment.

To keep the knuckle-headed stuff to a minimum, and to avoid people jumping in with the usual "I know where that happened!" comments, I will take your e-mail comments, rather than open the combox.

Fr. Z is the guy who runs this blog. o{]:¬)
View all posts by Fr. John Zuhlsdorf →
This entry was posted in ASK FATHER Question Box, SESSIUNCULA, SUMMORUM PONTIFICUM. Bookmark the permalink.