Priests and their habits 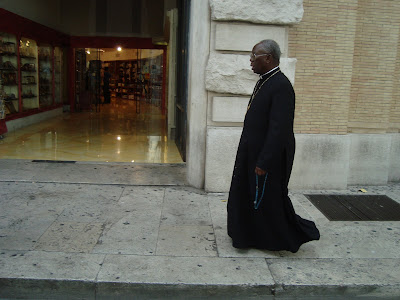 Fewer garment have been more hated by modernists and progressivists than the cassock.

In Rome, it is particular law that priests, first and foremost, should wear the cassock.  This was affirmed even in the 1980’s when Card. Poletti was the Vicar.

In the Directory for Priests the cassock is given first as the manner of dress especially in administration of the sacraments and other duties.

This is in from ANSA.  My emphases:

Pope asks priests to smarten up
Clerics should be more ‘recognisable’

(ANSA) – Vatican City, March 17 – Priests are under pressure to smarten up their wardrobes after Pope Benedict XVI made an apparent dig at members of the clergy who have been dressing rather too casually.

Declaring a ‘year of the priest’ that will begin on June 19 in a bid to encourage ”spiritual perfection” among clerics, the pope stressed that priests should be ”present, identifiable and recognisable for their faith, their personal virtues and their attire”.

According to Naples-based ecclesiastical outfitters Mastranzo, the pontiff has a point.

”Around 30% of priests dress in a (casual) scruffy manner and don’t even pay attention to the colour of their clothes,” a spokesman told Italian daily La Repubblica.

Of the remaining better-dressed clerics, around 40% opt for the black trousers, jacket and shirt with a dog collar combination, while the remaining 30% choose to wear ankle-length cassocks, which should be topped with a tri-crested hat.  [An Italian nickname for the biretta is "tricorno", which is where that "tri-crested" comes from.  However, the priest may also wear the practical "cappello romano"or "saturno"]

Mastranzo said that there has been a recent upturn in requests for cassocks, which are especially favoured by religious members of the Opus Dei and the Legion of Christ orders.   [ugh… no need to mention either of them.  I think this is more a young diocesan seminarian and younger priest phenomenon.]

Bardiconi, an outfitters in Rome, said the tradition-loving pontiff’s influence has already made itself felt among customers.

”With the new pope we had already noted a certain return to the classic look and a drop in casual clothes,” it said.

Sales of cassocks have been going up at Easter and Christmas, according to the shop, which said that a good cassock could last a priest ”up to 20 years”.  [When it is well-made, tailored, not the sort of rubbish one usually finds made in the USA.]

There is a connection between the word "habit" (stable interior disposition) and "habit" (distinctive clothing).