Sean Card. O’Malley responds to critics of his decisions about the Kennedy funeral

The Archbishop of Boston, Sean Card. O’Malley, has a blog.   The Cardinal was recently a highly visible participant in the funeral Mass for the late Sen. Edward Kennedy (D-MA), a decades long promoter of abortion rights.

The Cardinal, no surprise, drew a lot of fire for allowing that highly visible funeral.

The Cardinal, no surprise, is defending his choice.

Here is the relevant excerpt from His Eminence’s blog with my emphases and comments: 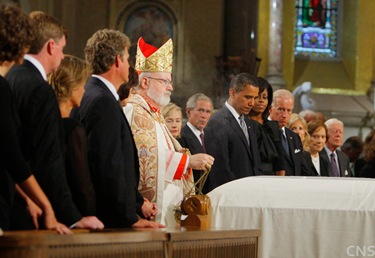 I wish to address our Catholic faithful who have voiced both support and disappointment at my having presided at the Senator’s funeral Mass.

Needless to say, the Senator’s wake and Catholic funeral were controversial because of the fact that he did not publically support Catholic teaching and advocacy on behalf of the unborn. [That is certainly one way to put it.  Another way to put it is that he aggressively promoted laws expanding abortion.] ­­­Given the profound effect of Catholic social teaching on so many of the programs and policies espoused by Senator Kennedy and the millions who benefitted from them, there is a tragic sense of lost opportunity in his lack of support for the unborn.  [There is also a tragic sense of lost life of the unborn.] To me and many Catholics it was a great disappointment because, had he placed the issue of life at the centerpiece of the Social Gospel where it belongs, he could have multiplied the immensely valuable work he accomplished.

The thousands of people who lined the roads as the late Senator’s motorcade travelled from Cape Cod to Boston and the throngs that crowded the Kennedy Library for two days during the lying in repose, I believe, were there to pay tribute to these many accomplishments rather than as an endorsement of the Senator’s voting record on abortion.

The crowds also were there to pay tribute to the Kennedy family as a whole. [I suppose as Archbishop of Boston this observation is necessary.]  On the national political landscape, if Barack Obama broke the glass ceiling of the presidency for African Americans, Jack Kennedy broke it for American Catholics.

As a young lad, I saw photographs of both Pope John XXIII and President John Kennedy hanging in the thatched cottages of County Mayo and heard the Gaelic greeting, “God and Mary be with you.” Three of the Kennedy brothers died in service of our country in the prime of life.  And Eunice Shriver, who died just a few weeks ago, was an outspoken defender of the unborn and an apostle of the Gospel of Life.  She taught us all how to love special children and to make room for everyone at the table of life. In 1992, Eunice petitioned her party’s convention to consider “a new understanding” of the issue, “one that does not pit mother against child,” but instead seeks “policies that responsibly protect and advance the interest of mothers and their children, both before and after birth.”

Much of what is noble in the politics and work of the Kennedys had its origins in the bedrock of the faith of Rose Fitzgerald Kennedy.  As a young woman she had a profound experience of God’s love that transformed her life.  She strove to communicate that faith to her large clan.  Since the time of her funeral Mass I have kept her memorial prayer card, inscribed with Rose Kennedy’s own words:

“If God were to take away all His blessings, health, physical fitness, wealth, intelligence, and leave me but one gift, I would ask for faith – for with faith in Him and His goodness, mercy, love for me, and belief in everlasting life, I believe I could suffer the loss of my other gifts and still be happy – trustful, leaving all to His inscrutable Providence.”  [So… are we to understand that this funeral was for…. them?]

There are those who objected, in some cases vociferously, to the Church’s providing a Catholic funeral for the [pro-abortion] Senator.   In the strongest terms I disagree with that position.   At the Senator’s interment on Saturday evening, with his family’s permission, we learned of details of his recent personal correspondence with Pope Benedict XVI.   It was very moving to hear the Senator acknowledging his failing to always be a faithful Catholic, and his request for prayers as he faced the end of his life.  The Holy Father’s expression of gratitude for the Senator’s pledge of prayer for the Church, his commendation of the Senator and his family to the intercession of the Blessed Mother, and his imparting the Apostolic Blessing, spoke of His Holiness’ role as the Vicar of Christ, the Good Shepherd who leaves none of the flock behind.  [So… the Pope said that he would pray for the Senator.]

As Archbishop of Boston, I considered it appropriate to represent the Church at this liturgy out of respect for the Senator, his family, those who attended the Mass and all those who were praying for the Senator and his family at this difficult time.  We are people of faith and we believe in a loving and forgiving God from whom we seek mercy. [I can understand that.  But.. there remains the question of public scandal.]

Advocating for the dignity of life is central to my role as a priest and a bishop. One of my greatest satisfactions in my ministry thus far was helping to overturn the abortion laws in Honduras.  The person who answered my call for help with that effort was Dr. Bernard Nathanson, who had been a prominent leader in NARAL and the abortion rights movement.  His own change of heart led Dr. Nathanson from a practice of providing abortions to becoming one of the most eloquent exponents of the pro-life movement.

Helen Alvaré, who is one of the most outstanding pro-life jurists, a former Director of the Bishops´ Pro-life Office and a long standing consultant to the USCCB Committee for Pro-Life Activities, has always said that the pro-life movement is best characterized by what it is for, not against.  We are for the precious gift of life, and our task is to build a civilization of love.  We must show those who do not share our belief about life that we care about them.  We will stop the practice of abortion by changing the law, and we will be successful in changing the law if we change people’s hearts.  We will not change hearts by turning away from people in their time of need and when they are experiencing grief and loss. [I know this argument and, in 99% of cases, in other words in those cases of people who are not supremely public figures of nearly legendary fame, I agree.  But when a person is so very visible, so very well-known for being both Catholic and pro-abortion, a person who was for decades in a position of influence in the United States Senate… well….  I am wondering if His Eminence’s arguments, unquestionably appropriate for 99% of people we might encounter, were appropriate in the case of Sen. Kennedy.]

At times, even in the Church, zeal can lead people to issue harsh judgments and impute the worst motives to one another.  These attitudes and practices do irreparable damage to the communion of the Church.  If any cause is motivated by judgment, anger or vindictiveness, it will be doomed to marginalization and failure.  Jesus’ words to us were that we must love one another as He loves us.  Jesus loves us while we are still in sin.  He loves each of us first, and He loves us to the end.  Our ability to change people’s hearts and help them to grasp the dignity of each and every life, from the first moment of conception to the last moment of natural death, is directly related to our ability to increase love and unity in the Church, for our proclamation of the Truth is hindered when we are divided and fighting with each other.  [A couple points.  First, the anger that a lot of people expressed was real.  Most of the people who were angry had good reason to be angry, and they did not express themselves in extreme terms.  I wonder if perhaps somehow their opinions are less important, if they are second class?] 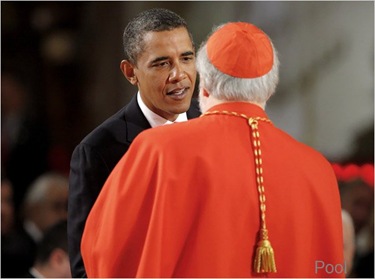 President Obama and three former presidents attended Senator Kennedy’s funeral.  I had the opportunity to speak briefly with President Obama, to welcome him to the Basilica and to share with him that the bishops of the Catholic Church are anxious to support a plan for universal health care, but we will not support a plan that will include a provision for abortion or could open the way to abortions in the future.  The President was gracious in the short time we spoke, he listened intently to what I was saying.  [I suspect that if the Cardinal Archbishop of Boston wanted to get a message into the hands of the President of the United States, it would not require a funeral like this to do it.]

Democrats and Republicans sat side by side in the Basilica of Our Lady of Perpetual Help, praying for Senator Kennedy and his family.  It is my sincere hope that all people who long to promote the cause of life  will pray and work together to change hearts, to bring about an increased respect for life, and to change laws so as to make America a safe place for all, including the unborn.  [No one can argue with that.]

I am sure that many of you will have respectful observations to make.

I will not, however, open the combox here.

I believe the combox is open at Card. O’Malley’s blog.

You may offer your intelligent and respectful comments there.

Fr. Z is the guy who runs this blog. o{]:¬)
View all posts by Fr. John Zuhlsdorf →
This entry was posted in Emanations from Penumbras, Linking Back, SESSIUNCULA, The Drill. Bookmark the permalink.