Too many ornaments on your Rosary…Poem 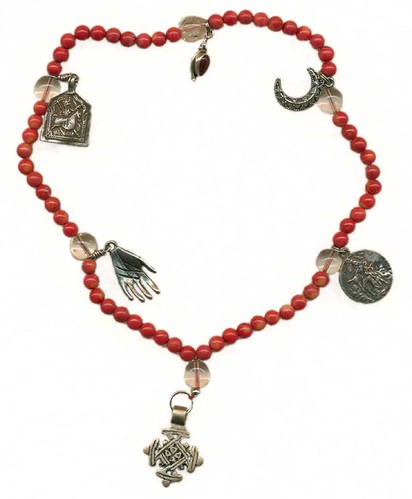 There are may ways to recite the Most Holy Rosary.  The basic paradigm changes from country to country.  In Italy, for example, the recitation of the Rosary usually includes the Litany of the Blessed Virgin.  In the USA, people often tack on the "Fatima Prayer".  In Germany you sometimes hear the addition, during the Hail Mary, of the Mystery of that decade after the Holy Name.

At my home parish, the old pastor would, go to church or to wakes and just say the Rosary, no frills, no additions.  That seemed to work out just fine.

In interesting request from a reader:

I am looking for a poem in the monthly " Catholic Hearth" It had a poem in it, by a father who was complaining because his wife was hanging too many ornaments (intentions) on the family Rosary. I wish I could get a copy so I could recite it when the woman gets a little out of control….praying for everybody and their neighbor…."3 hours later" the Rosary is finished and were all about to kill her…  but with a smile on our face and Rosary beads in our hands.

Can anyone dig this up?

BTW… if you are interested in historic forms of rosaries, take a look at Paternoster Row.

This might be the poem in question.  [The word "keownrawning" means "grumbling".]

I would love to have a recording of this made a, preferably, an older Irish priest.  Any takers out there?  I know there are priests in Ireland who read this.  How about it, Reverend Fathers?  I’ll put you in a PODCAzT!

THE TRIMMIN’S ON THE ROSARY by John O’Brien

Ah, the memories that find me now my hair is turning gray,
Drifting in like painted butterflies from paddocks far away;
Dripping dainty wings in fancy – and the pictures, fading fast,
Stand again in rose and purple in the album of the past.
There’s the old slab dwelling dreaming by the wistful, watchful trees,
Where the coolabahs are listening to the stories of the breeze;
There’s a homely welcome beaming from its big, bright friendly eyes,
With The Sugarloaf behind it blackened in against the skies;
There’s the same dear happy circle round the boree’s cheery blaze
With a little Irish mother telling tales of other days.
She had one sweet, holy custom which I never can forget,
And a gentle benediction crowns her memory for it yet;
I can see that little mother still and hear her as she pleads,
"Now it’s getting on to bed-time; all you childer get your beads."
There were no steel-bound conventions in that old slab dwelling free;
Only this – each night she lined us up to say the Rosary;
E’en the stranger there, who stayed the night upon his journey, knew
He must join the little circle, ay, and take his decade too.
I believe she darkly plotted, when a sinner hove in sight
Who was known to say no prayer at all, to make him stay the night.
Then we’d softly gather round her, and we’d speak in accents low,
And pray like Sainted Dominic so many years ago;
And the little Irish mother’s face was radiant, for she knew
That "where two or three are gathered" He is gathered with them too.
O’er the paters and the aves how her reverent head would bend!
How she’d kiss the cross devoutly when she counted to the end!
And the visitor would rise at once, and brush his knees – and then
He’d look very, very foolish as he took the boards again.
She had other prayers to keep him.  They were long, long prayers in truth;
And we used to call them "Trimmin’s" in my disrespectful youth.
She would pray for kith and kin, and all the friends she’d ever known,
Yes, and everyone of us could boast a "trimmin"’ all his own.
She would pray for all our little needs, and every shade of care
That might darken o’er The Sugarloaf, she’d meet it with a prayer.
She would pray for this one’s "sore complaint," or that one’s "hurted hand,"
Or that someone else might make a deal and get "that bit of land";
Or that Dad might sell the cattle well, and seasons good might rule,
So that little John, the weakly one, might go away to school.
There were trimmin’s, too, that came and went; but ne’er she closed without
Adding one for something special "none of you must speak about."
Gentle was that little mother, and her wit would sparkle free,
But she’d murder him who looked around while at the Rosary:
And if perchance you lost your beads, disaster waited you,
For the only one she’d pardon was "himself" – because she knew
He was hopeless, and ’twas sinful what excuses he’d invent,
So she let him have his fingers, and he cracked them as he went,
And, bedad, he wasn’t certain if he’d counted five or ten,
Yet he’d face the crisis bravely, and would start around again;
But she tallied all the decades, and she’d block him on the spot,
With a "Glory, Daddah, Glory!" and he’d "Glory" like a shot.
She would portion out the decades to the company at large;
But when she reached the trimmin’s she would put herself in charge;
And it oft was cause for wonder how she never once forgot,
But could keep them in their order till she went right through the lot.
For that little Irish mother’s prayers embraced the country wide;
If a neighbour met with trouble, or was taken ill, or died,
We could count upon a trimmin’ – till, in fact, it got that way
That the Rosary was but trimmin’s to the trimmin’s we would say.
Then "himself" would start keownrawning – for the public good, we thought –
"Sure you’ll have us here till mornin’.  Yerra, cut them trimmin’s short!"
But she’d take him very gently, till he softened by degrees –
"Well, then, let us get it over.  Come now, all hands to their knees."
So the little Irish mother kept her trimmin’s to the last,
Every growing as the shadows o’er the old selection passed;
And she lit our drab existence with her simple faith and love,
And I know the angels lingered near to bear her prayers above,
For her children trod the path she trod, nor did they later spurn
To impress her wholesome maxims on their children in their turn.
Ay, and every "sore complaint" came right, and every "hurted hand";
And we made a deal from time to time, and got "that bit of land";
And Dad did sell the cattle well; and little John, her pride,
Was he who said the Mass in black the morning that she died;
So her gentle spirit triumphed – for ’twas this, without a doubt,
Was the very special trimmin’ that she kept so dark about.

But the years have crowded past us, and the fledglings all have flown,
And the nest beneath The Sugarloaf no longer is their own;
For a hand has written "finis" and the book is closed for good –
Here’s a stately red-tiled mansion where the old slab dwelling stood;
There the stranger has her "evenings," and the formal supper’s spread,
But I wonder has she "trimmin’s" now, or is the Rosary said?
Ah, those little Irish mothers passing from us one by one!
Who will write the noble story of the good that they have done?
All their children may be scattered, and their fortunes windwards hurled,
But the Trimmin’s on the Rosary will bless them round the world.

Fr. Z is the guy who runs this blog. o{]:¬)
View all posts by Fr. John Zuhlsdorf →
This entry was posted in Poetry, SESSIUNCULA and tagged Poetry. Bookmark the permalink.