Catholics have a very immediate and personal experience of sacraments.  We know we have to be there.

But there are different kinds of presence, aren’t there.  A person can be present at, say, Holy Mass, and yet have his mind a thousand miles any.  A person might with great longing desire to be present at Holy Mass, and yet physically be a a thousand miles away.  Through technology we are have a kind of presence with events which are taking place live.

In this week’s issue of the UK’s Catholic Herald I have a piece about the need for dioceses to have a point man for ministry on the internet, a Vicar for Online Ministry.

Then I read this.

This is from the site of CNN with my emphases and comments. 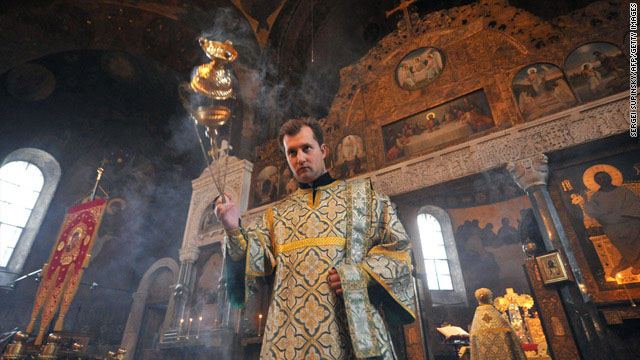 (CNN) — Hjalti á Lava was searching his iPhone for a Bible app when he stumbled across Church Online, a service of Web site LifeChurch.tv. Soon he was regularly logging into the Oklahoma-based cyber-church — some 4,100 miles away from á Lava’s home in the Faroe Islands, west of Norway.  [And it wasn’t a Catholic site, was it.]

"It allows me to connect with others and have conversations about the message," says á Lava, who shares his faith with other believers in the site’s live chat room. "Technology allows us today to have fellowship across borders and cultures."

In doing so, á Lava joined growing numbers of Christians worldwide who are migrating from the chapel to the computer. A map on the Church Online site showed users from 22 countries logged into a recent service.  [And let us not deceive ourselves: some of them are Catholic.  Some of them, looking for something, would resonate with a Catholic message.]

Online religious services offer convenience to those who are too isolated or infirm to attend a real-world church. But can worshipping via a computer offer true spiritual fulfillment?  ["Fulfillment"?  It depends on how you define that.  Something, sure.  Everything?  No.]

Internet pastors and parishioners cite their 24-hour access to interactive tools and social-networking platforms to show their online experiences are as meaningful as those that take place with face-to-face congregations.  [As meaningful?  I wonder.  Different, but "as meaningful"?]

"We were blown away at how people could actually worship along [online]," says Craig Groeschel, senior pastor at LifeChurch.tv. "The whole family will gather around the computer, and they’ll sing and they’ll worship together. Instead of trying to get people to come to a church, we feel like we can take a church to them."

"Online church is close enough to the real thing to be dangerous," ["dangerous"] says Bob Hyatt, a pastor who leads the brick-and-mortar Evergreen Community Church in Portland, Oregon. In a blog post for ChristianityToday.com, he writes that calling it virtual church "gives people the idea that everything they need is available here."

The debate is an extension of a wider argument over social interaction in virtual environments versus the physical world. But because practices of faith are involved, both sides are deeply invested in the outcome, seeing it as a statement on the nature of the Christian person’s relationship with God.

Supporters of online churches have a common response to their skeptics: Try before you criticize. The virtual experience goes far beyond using live chat rooms to exchange emoticons instead of hugs and handshakes, they say.

Links allow congregants to "raise their hand" and publicly commit to Christ, [So, basically evangelical funamentalists are getting into this.  What are we doing as Catholics?] while prayer requests and one-on-one guidance are a click way. [Okay!] Sermon notes can be shared and discussed. And many online churches are aided by volunteers, allowing them to hold services several times each day.

The Internet campus [!] of the Flamingo Road Church in Cooper City, Florida, pulls in more than 2,000 congregants from around the world during its Sunday services. [!] Pastor Doug Gramling said his three children are part of the Internet generation that will eventually decide the future of worship. They use Web tools to stay in constant connection with friends over vast distances, which Gramling says "gives me confidence that it can happen in online church."

But the disconnect from physical closeness is what Hyatt said he’s "fighting hardest against." His own church offers online extensions such as podcasts and forums. But he believes "the computer screen is a supplement, not a replacement."

Hyatt and other critics are particularly distressed by the online offering of traditional sacraments, such as Communion and baptism. He believes it is "ridiculous" that someone can grab grape juice and a cracker from the fridge and watch a computer screen, thinking they are truly participating in a gathering of the faithful.  [Yah, and from a Catholic point of view, that is pretty crazy.  But try to explain why that isn’t okay from an evangelical point of view. ]

"Something about the physical presence, breaking the same bread, is what Communion is meant to be," he says.

"Knowing that others are also celebrating Communion, regardless of location, [note how subjective this is] makes it an especially wonderful time," says Cole, who believes real-world Communion can ring hollow. "When I’ve taken Communion in live surroundings, I often got the sense that it was ritualistic and without meaning."  [Feelings drive a lot of this.]

Matthew Bailey, a parishioner in the Franktown United Methodist Church in Virginia, believes that the meaning of the ritual is what matters.

"If people are willing to go to the trouble of giving their own Communion, then it is quite probably ‘real’ for them," he says. While Bailey chooses to remain at his face-to-face church, he believes any person "faithfully attending an online church service, is being more proactive, and thus probably more attentive, than many longtime churchgoers."

Douglas Estes, lead pastor of Berryessa Valley Church in San Jose, California, and author of "SimChurch," a book about Internet church services, would like to see this debate go away.

"The Bible sees church not as a man-made building but as a people gathered to glorify God with their lives," he says. Estes believes the quality of a community should be judged by the spiritual fellowship it offers.

"There is only one substantive difference between an online church and a brick-and-mortar church: The place where they meet."

Fr. Z is the guy who runs this blog. o{]:¬)
View all posts by Fr. John Zuhlsdorf →
This entry was posted in Our Catholic Identity, SESSIUNCULA, The Last Acceptable Prejudice and tagged cyber-churches, cyber-parishes, internet churches, Online services. Bookmark the permalink.