In the brick by brick file…. 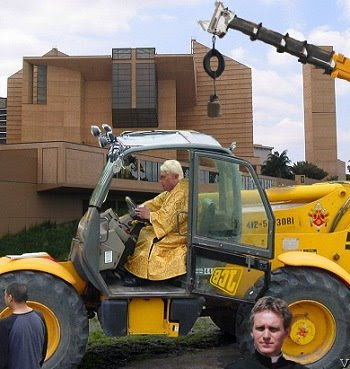 Vatican City, Apr 6, 2010 / 05:53 am (CNA/EWTN News).- This morning the Holy Father appointed current San Antonio Archbishop Jose H. Gomez as Coadjutor Archbishop of Los Angeles, California, the largest diocese in the United States. The prelate will serve alongside current Cardinal Roger Mahoney, and will take over his position when he retires.

Archbishop Gomez was born in 1951 in Monterrey, Mexico to Dr. José H. Gomez and Esperanza Velasco, both who are now deceased.

The prelate earned bachelor’s degrees in accounting, philosophy and theology and was ordained an Opus Dei priest in 1978. In 1980, he obtained a doctorate in theology from the University of Navarre’s Pamplona, Spain campus.

From 1987 to 1999, then-Father Gomez was in residence at Our Lady of Grace Catholic Church in San Antonio where he assisted with the parish’s pastoral work. It was during this time that he became a regional representative to the National Association of Hispanic Priests (ANSH). In 1995 he was named president, then took on the role of executive director in 1999.

Archbishop Gomez played a central role in establishing the Hispanic Seminary of Our Lady of Guadalupe in Mexico City which opened in 2000.

Then in 2001, he was ordained an auxiliary bishop for the Archdiocese of Denver, where he served in several areas, including outreach to the Hispanic community. He also organized the establishment of Denver’s Centro San Juan Diego for Family and Pastoral Care, a place for formation of lay leaders and a base to provide welcoming services to immigrants.

In 2005, the year he was appointed Archbishop of San Antonio, he was named one of Time Magazine’s 25 most influential Hispanics in the United States, and in 2007 he was on a CNN’s list of “Notable Hispanics” in a web special celebrating “Hispanic Heritage Month.”

While the Archbishop of San Antonio, Most Rev. Gomez created the The Catholic Community Foundation for the Roman Catholic Church of the archdiocese and was key in bringing together Hispanic leaders for the Catholic Association of Latino Leaders (CALL).

Archbishop Gomez was also appointed in 2008 as a consultant to the Pontifical Commission for Latin America. He also serves in various roles for the United States Catholic Conference of Bishops including: chair of the task force on the Spanish Language Bible for the Church in America, chair of the Committee on Cultural Diversity in the Church, member of the Committee on Doctrine, and member of the Subcommittee on Hispanics and the Liturgy.

The news coincides with things I have heard for a few months.

I picked up the image, above, at Sancte Pater.

I am pretty sure that this is not a "win" for Card. Mahony.

Fr. Z is the guy who runs this blog. o{]:¬)
View all posts by Fr. John Zuhlsdorf →
This entry was posted in Brick by Brick and tagged Archbp. Jose Gomez, Card. Mahony, San Antonio. Bookmark the permalink.