Mocking no longer “the dead bones that lay scattered by”: Richard III… found?

Many years ago I worked for many years at, yes, a Renaissance Fair.  I did lots of Shakespeare on demand and made lots of money doing it.  I met a lot of interesting people, too.  Something of them were interesting and others were only interesting, if you get my drift.

One of the people I met there was a small and deeply intelligent woman, an artist, who was fanatically devoted to anything having to do with Dicken, that is, Richard III.  It took very little effort to convince me that Richard was not the grotesque monster of the play.  To this day I mark 22 August with a certain solemnity, and not just for reason most obvious to readers of this blog.

You might say a prayer for LM, who died a couple years ago.  She would have been thrilled by what I read today.

As I arrive today in what Gaunt calls in another Richard play “this scepter’d isle… this blessed plot…. this England”, I read a story from the BBC sent by a reader indicating that the bones of Richard III, probably, have been discovered beneath a carpark in Leicester.

They are not saying that they have, for sure, found Richard III, but, the skeleton is in good condition, of an adult male, it was found in the choir section which was reported to be the burial place, there is a skull injury consistent with Richard’s reported injury in battle, there is an arrow head in the vertebrae, there are spinal abnormalities, scoliosis of the spine, so that the right shoulder would have been higher than the other.  DNA testing now begins. 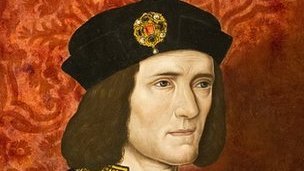 Take it away BBC:

Archaeologists searching for the grave of Richard III have said “strong circumstantial evidence” points to a skeleton being the lost king.

The English king died at the battle of Bosworth in 1485.

A dig under a council car park in Leicester has found remains with spinal abnormalities and a “cleaved-in skull” that suggest it could be Richard III.

The University of Leicester will now test the bones for DNA against descendants of Richard’s family.

“Although we are far from certain yet, it is already astonishing.”

A university spokesperson said the evidence included signs of a peri-mortem (near-death) trauma to the skull and a barbed iron arrow head in the area of the spine.

Richard is recorded by some sources as having been pulled from his horse and killed with a blow to the head.

The skeleton also showed severe scoliosis – a curvature of the spine.

Although not as pronounced as Shakespeare’s portrayal of the king as a hunchback, the condition would have given the adult male the appearance of having one shoulder higher than the other.

Philippe Langley, from the Richard III Society, said: “It is such a tumult of emotions, I am shell-shocked.

“I just feel happy and sad and excited all at the same time. It is very odd.”

As the defeated foe, Richard was given a low-key burial in the Franciscan friary of Greyfriars.

This was demolished in the 1530s, but documents describing the burial site have survived.

The excavation, which began on 25 August, [Perhaps coinciding with the late King’s interment?] has uncovered the remains of the cloisters and chapter house, as well as the church.

Work focused on the choir area, in the centre of the church, where it was indicated Richard was interred.

The bones were lifted by archaeologists wearing forensic body suits in an effort to limit contamination by modern materials.

DNA will be extracted from the bones and tested against descendants of Richard’s family.

Dr Turi King, who is leading the DNA analysis, said: “It is extremely exciting and slightly nerve-wracking.

“We have extracted teeth from the skull, so we have that and a femur, and we are optimistic we will get a good sample from those.”

The tests are expected to take about 12 weeks to complete.

If their identity is confirmed, Leicester Cathedral said it would work with the Royal Household, and with the Richard III Society, to ensure the remains were treated with dignity and respect and reburied with the appropriate rites and ceremonies of the church.

Work to record the finds are continuing and discussions about when to fill in the trenches are ongoing, officials said.

Fr. Z is the guy who runs this blog. o{]:¬)
View all posts by Fr. John Zuhlsdorf →
This entry was posted in Just Too Cool and tagged archeology, Richard III. Bookmark the permalink.